Over the Wires : Scott Miller

When Steve Earle was released from prison in the mid-90s, in addition to quickly recording his three best records, he also teamed up with Ray Kennedy and launched E-Squared Records, giving a home to such acts as 6 String Drag, Bap Kennedy, Cheri Knight and a foursome out of Knoxville, Tennessee called The V-Roys. Complimenting his own creative outburst, Earle’s ear for talent was every bit as impressive. Of the handful of acts on the label, none appeared as promising as The V-Roys. Merging straightforward pop with a hint of some traditional sensibilities, they seemed to have it all: great songwriting, energy, hooks, passion and even a pretty damn cool look. But like a number of acts on Earle’s label, after a few records, The V-Roys were no more. Co-frontmen Mic Harrison and Scott Miller pursued solo careers, and of all the talent on Earle’s fantastic, but short-lived label, it’s Miller who’s gone on to release the strongest post-E2 material. Often backed by his band The Commonwealth, Miller has released six albums (plus a Christmas CD) since, the majority on Sugar Hill Records and some seemingly out of his home.

As a longtime fan, I recently wrote a small piece on Miller on this blog. A day later, I received a note from an old buddy in the music industry, who, as luck would have it, now does publicity for Miller. A few catch-up notes led to me asking if Scott would be open to a few questions. Not only did Scott agree, but not two days later a large box arrived with a return address of Scott Miller. So not only was I afforded the opportunity of connecting with one of my heroes, but I got a bunch of t-shirts and kazoos simply for saying a few nice things. As is often the case, the spirit and altruism of many of my favorite artists continues to amaze me. And people wonder why I spend every available dollar on records.

When does the next record come out? How will it be released? Will you join this rebirth of vinyl?

Well, without being too much of a smart ass, it will come out when it’s done! I am still in the writing process, which is a lot of waiting, which doesn’t make my management or label very happy….wait a minute, I own the label, so screw that guy. I’m basically waiting for a song, ‘the song’, that comes that defines a new sound, a new perspective and *hopefully* shows a new growth of some kind within me. A ‘new perspective’ that I feel like I have to shove down the world’s throat. I don’t even know that “albums” per se are necessary. I hope to start releasing new songs…well…now.

You know, I’m either too far ahead (or too far behind since everything comes back around) to take advantage of any trend. Vinyl is the perfect example, as I’ve held on to my vinyl rights through all the labels to which I’ve been signed. And I listen to vinyl mostly in my own home. And now it’s hip and I couldn’t give a shit. Just wait until manual typewriters come back, I’ve been collecting those for over 30 years. See what I mean?

What inspired “Freedom’s a Stranger”?

I had the title forever. I think I got that when I heard the Carl Perkins song “Sweethearts and Strangers” and maybe misheard it, and decided that would make a good title. I held onto it (obviously) for quite a while and then when writing songs for my “Citation” CD this song just popped out. Jim Dickinson produced that record and when I sent him the rough guitar/vocal of songs for the record he said “That song has to be on the record and it has to be first.” I think lots of people (well I know lots of people) identify with it. Sometimes I introduce it by saying, “This is a song about growing up in Swoope, which was probably a lot like growing up in Austin, Indianapolis, Hattiesburg or any other town Virginia created.”

I heard a new song called “Lo Siento, Spanishburg, WVa” on NPR’s World Cafe? How’d you end up writing about that town?

My wife is from near there, in Mercer County, West (by God) Virginia. I would always see the sign for Spanishburg whenever we would go to my in-laws. I was intrigued by what it might be, a little enclave on the Bluestone River. One beautiful fall day we loaded up and drove over to check it out. My mother in law used to teach over there. That’s her voice at the beginning of the video, “Scott, this is the road to Spanishburg…”

Cheap. They’ll kill you for $5. JUST KIDDING. It’s awesome. I moved there out of college and have grown up in/been raised by that town. I could never repay it or thank it enough. There’s no place like it that I have seen, nor any place that could ever mean as much to me as it does. Even where I’m from (in Virginia). Knoxville is many things: a watershed for hillbillies, the “Bermuda Triangle of Appalachia” as R.B. Morris called it. The last place anyone saw Rachmaninoff OR Hank Williams alive. Home of the Volunteers. And home for me.

Do you feel that you were a part of the mid/late 90s alt.country “movement”?

Nope. We (The V-Roys) always thought of ourselves as a pop band. The “movement” never really embraced us and we never really hugged back either.

I’ve watched your cover of the Statler Brothers “I Will Go To My Grave Loving You” on YouTube more times that I’d dare admit. The video I watched is from the Cayamo Cruise Tour. How’d you end up doing that?

Those guys (The Statler Brothers) are from Swoope, Virginia. They’ll tell you Staunton, VA but they and I know better. I’ve always been impressed by the Statler Brothers on all levels: from their songs to their performances, by their activeness in the community, to their humbleness. Incredible envoys of the Valley.

But how did I end up on the Cayamo Cruise? I have not idea. If I DID I would get myself back on it for 2012 but they haven’t called of yet…hint, hint….

Speaking of graves, five records that you’d take with you?

and one more: Miles Davis’ “Bitches Brew”- I’m told this album is genius, but I don’t get it. Maybe it’ll be revealed to me in the afterlife….

The predictable industry question: What do you think of the music industry today? Do you see yourself working with a label again?

If a label can “show me it can grow me” I’d sign in a heartbeat. Otherwise, they are simply to be placed with buggy whips and (I was gonna say vinyl) Napoleonic canons. It’s a DIY world and I totally embrace that. I think all artists should.

I only saw the V-Roys once. You were opening for God Street Wine at the now-defunct Wetlands in New York City. If I remember correctly, Steve Earle and a very young Justin Townes Earle were in the crowd. Remember that night?

Sure….yeah…..I remember that show…..actually I do. We played the Conan O’Brien show then busted to the Wetlands through NYC rush-hour traffic. I drove and kept chanting “B/E /A /GG- R /E /SS /I/V/E : Be aggressive, Be Be aggressive!” (Anyone remember that cheer from high school?)

We got there, set up and right before we played a friend of ours from Knoxville came waltzing in the door. He worked for Barnum and Bailey Circus and they were in town as well. We smoked some pot out of a pipe carved from a cocktail carrot and hit the stage. That’s the night we got signed to Warner Bros. if I remember correctly. But my memory has always been a bit suspect.

What was it like to work with Steve? Are you still in touch?

We talk every now and again. Nothing regular. He was on the Cayamo Cruise this past year as well. I learned a lot working with him and with Ray Kennedy. That was our first experience in a studio, so we had a lot to learn and Steve is always ready to tell you how it should be done.

Would you consider Bread current?

Any chance you’ll make it out west?

I do make it out west, though I don’t know that I have plans to tour out there before the end of this year. This has been a slow year touring wise for me, lots going on at home I’ve had to tend to.

And finally, I see on your site that Prince William and his wife are big fans. How did you meet?

I was asked to play a series of concerts for the celebration of Virginia’s 400th Anniversary. One of the shows was attended by the Queen. She must have bought them some albums or a t-shirt. 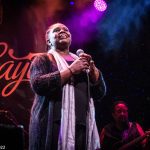 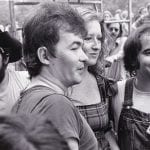 THROUGH THE LENS: John Prine Was One of Us