I thought I’d post another blog from Tony James Shevlins experiences in Nashville as he toured his new album, Songs From the Last Chance Saloon.

Every city has a rhythm.  New York and London are frenetic; Paris and Rome, less so. Moscow’s is taught. I was having trouble finding Nashville’s rhythm. I think it could be that the city has been invaded this weekend by fans of women’s basketball from the states of Indiana, Maryland, Connecticut and New York, whose teams were playing for the NCAA title and with them they bought a little of the feel of their own cities. In all the bars there was good natured banter between the fans that would put our football fans to shame.

I have opted to stay in a hostel and not a hotel. The downtown hotels are very expensive. The Nashville Downtown Hostel is a third of the price. I must come clean here – I couldn’t bear the thought of sharing with a bunch of sweaty youths so I have got my own room. The decision to stay in the hostel had proved itself to be a good one. Most of the young staff are musicians and songwriters, drawn from all over the US to Music City. One lad, Connor from Bangor, Maine is a banjo player who has just hooked up with a cellist. Banjo and cello! I heard them rehearsing the other night – it sounds awesome! Everywhere you go, there is music. As I write this in the lounge area of the hostel, I’m listening to the sounds of Johnny Cash. We’ve already been treated to  John Prine, Neil Young and Creedence Clearwater Revival – you wouldn’t get that in a Holiday Inn!

I was lucky enough to have my first Nashville performance at the famous Bluebird Cafe. it is widely known as the venue where Garth Brooks was discovered. More recently, it has been featured in the US TV drama Nashville. Its new celbrity status is having an effect. Tourists are turning up, not so much for the music but hoping to see members of the cast (I’m reliably informed the TV studio have built a replica Bluebird set on a soundstage out of town).

It would be a shame if this revered venue  – the cafe’s motto is “shhhhhhhhh” – turned into something like the Hard Rock Cafe. I would hate it if the respect shown to songwriters was diminished by a TV show that at its heart has some fantastic songs (later on in the week, I would meet someone who has had a song used on the show).

When I went on stage and said “hello” and not “hi”, there was a quiet “ooh”. I introduced myself as coming from England and being very happy to be in the home of songwriting. I thought I needed to make an impression quickly and played my song Nobody. It went down very well. The audience listened intently. The English accent is a great asset. When I came off stage, there was a lot of interest in my story about being in Nashville and almost everyone i spoke to offered advice about what I should do in my time there. They told me which were the best open mic nights to go to after I had finished my gigs. Open mic nights are a great way to meet other writers and performers. One venue kept coming up – Douglas Corner Cafe. It was the venue where the great Guy Clark recorded his live album, Keepers.

I took the bus. I like buses, but being dropped off at a junction where Robert Johnson would have said, “Hmm, maybe not” did make me wonder about the merits of wandering the streets of midtown Nashville with a thousand dollar guitar.

The Douglas Corner Cafe was, to put it mildly – earthy. It was dark and dingy. In other words, it was everything I hoped it would be. It was hosted by Donny Winters, whose band, The Winters Brothers Band were contemporaries of Lynard Skynrd and the Allman Brothers, and whose father had played with Marty Robbins. Every now and then, from behind the mixing desk, Donny would add some incredibly beautiful dobro playing to the music being played on the stage.

The standard of the acts varied immensely. There were some clearly experienced performers, with exceptional songs, alongside those who were just starting out. The latter were accorded just as much respect as the  elder statesmen; in fact, the oldies gave encouragement and advice to the newbies.

There are four of you on stage and you play between two and four songs each (depending on the demand to perform). One song each from left to right and then round again until everyone has performed. Then four more songwriters take over.

As Nobody had served me so well at the Bluebird, I opened with that. Once again, it hit the spot. When it came time to do my second song, I opted for Crazy. I had planned something more serious but I had just heard a Jewish guy do a reworking of George Harrison’s My Sweet Lord retitled My Sweet Boy (he’s a schmuck). So I invited a young girl who had played earlier, up on stage to play the trombone solo from the recording – on kazoo! It worked a treat. I made lots of friends that night. Brad from Oklahoma and Scott from Iowa (everybody’s from somewhere – I’m Tony from England), I would write a song with later on in the week, and Gary from Colorado would become my mentor around town. Liam from Houston, Texas gave me a ride back to town (they don’t give you a lift, they give you a ride). Liam had just arrived in Nashville and was sleeping in his truck until he found work to subsidise his songwriting. Just about every waiter or barman I’ve met is a songwriter. Later on in the week, a barman will play me the best ecological song I’ve ever heard, that moved me to tears. As my buddy, Brad says: “You can’t judge a book by its cover. Most likely, they’ll hand you a new ass.” Quite. I think.

I’m trying to eat healthily. I make a daily trip to the market to buy fruit and vegetables for my breakfast and lunch, and then I eat at the venue I’m playing at in the evening. I’ve been getting some strange looks from other hostel guests as I chop up bananas, grapes and dried apricots. One guy said, “That sure looks good. Be better with some cream on it, though”. The evening meal will feature a lot of something fried or smothered in a sauce or with “all the fixin’s”.

On my first day walking back from the market, a couple stopped me and asked me the way to the Ryman Auditorium. I apologised that I didn’t know, and that I was a stranger, myself. Whenever I engage with people and they hear the English accent, it invariably leads to a conversation where they tell me where their ancestors were from – Inger-land, Ire-land or  Scot-land”.  It is just their way of breaking down barriers and making me feel welcome. Long may it continue.

Today as I walked home from the market with my shopping, a couple asked me for directions. I knew where they were heading, and so I told them – in my best  southern accent, finishing with, “y’all have a good day, now, y’hear?” They thanked me and went on their way.

I think I’m starting to find the rhythm of Music City. It’s a beat I can dance to. 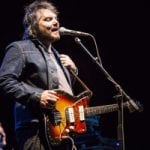 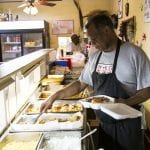