Bluegrass has often been described as music for common people. You will usually see a bluegrass band hovering around a central microphone, with no electric instruments in sight. The songs are highly narrative, with the traditional themes of home, family, love, and religion. The golden age of bluegrass may have been in the 1950s, with Bill Monroe, Flatts and Scruggs, and The Stanley Brothers, while the North American consciousness really started to appreciate the genre with the wildly popular soundtrack to the movie O Brother, Where Art Though?

Given that musicians of my generation are more likely to buy the first Fender Deluxe Fat Stratocaster that they see on Craig’s List (seriously, this was the first guitar listed today), than to pick up a banjo or a mandolin, I’m always thrilled when a young bluegrass band comes along and adds to the tradition. Huntley Slim and the Suburban Cowboys formed in the Ottawa area in the mid-2000s. They are headed by Chris Mellor on guitar and Seamus Mulready on banjo, both of whom share lead vocals. The name Huntley comes from the township west of Ottawa where Mellor grew up. In 2007 they put out an EP called Sherway Sessions which they self-recorded in 3-4 hours one Sunday “instead of going to church.” Sherway Sessions is available for download here. 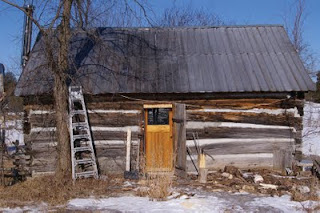 This summer they released their first full-length album entitled Songs From This Chicken Coop. The album was actually recorded in an old chicken coop (right) in Carp, Ontario, where Mellor’s father was building a boat. According to Mellor, “We recorded the instruments live off the floor, mainly we found it too difficult to use a click track, but the natural feel of the album goes well with the type of music we’re playing. The vocals and harmonica were added later, but still recorded in the chicken coop. April 10, 2009, was when we did the instruments. It was a cold day, we had heaters going in the chicken coop beside everyone between takes.” You don’t get any more DIY than that!

Although Huntley Slim’s MySpace page lists “whoever we can borrow” as musicians after Mellor and Mulready, for this recording they had help from Lisa Hanes on upright bass, Jason MacDonald on Mandolin, Steve Stacey on harmonica, Steph Clementine on backing vocals, and Dan Deslaurier on Dobro. Deslaurier also produced, engineered, mixed and mastered Songs From This Chicken Coop. Mellor’s wife Taryn made the cover quilt (top photo).

The songs themselves are wonderful traditional bluegrass arrangements with ever-present country music themes of love gone wrong, whiskey, regrets and heartaches, and plus more modern day lyrics on the misery of living in suburbia, feeling old at age 30, and road tripping across Canada. One of their songs is even bilingual. Parlez-vous français?

If you need some old-time acoustic alternative country music from the capitol of the great white north, and who doesn’t need this, I highly recommend Songs From This Chicken Coop. Its an incredibly enjoyable album to listen to, and highly complements traditional bluegrass music. Put this album on your Christmas list pronto!

Bottom Floor
Good Old Days
Have You Ever…?
Buy (CD Baby): Songs From This Chicken Coop (2009) Above: Huntley Slim and the Suburban Cowboys record their album in a chicken coop on a cold April day next to half of a hull of a boat. Note the twelve of Upper Canada Lager – its never too cold to drink beer in Carp, Ontario.