On the eve of The New Orleans Jazz and Heritage Festival, otherwise known as Jazzfest, fans learned of the death of the Neville brother Charles. The tie dyed saxophone player that is featured in the song “Yellow Moon” had been diagnosed with pancreatic cancer. Although his death was mourned, the city of New Orleans, musicians, and fans celebrated his life during the festival.

The first weekend’s celebration began and ended with perfect weather. Recent festival goes will remember that this is not always the case. In the past two years torrential storms have cut the number of scheduled performances.

I began my Friday morning with The Deslondes, an American five piece band originating from New Orleans. Their blend of folk, American roots, rock n roll, country, and zydeco was a perfect introduction to almost every style of music featured at the festival.

Following The Deslondes was another local artist, Eric Lindell. Lindell’s brand of bluesy soul has been marinated with a bit of New Orleans funk. Lindell’s feel good songs had the early afternoon crowd in a groove. His cover of Neil Young’s “Cinnamon Girl” was played with a slower reggae beat which accentuated the song’s lyrics. It was transformed into a beautiful love song.

Friday’s Jazzfest featured performances by two jazz heavyweights. First, the trumpet player Christian Scott a Tunde Adjuah brought the future of jazz to the stage. The New Orleans native has released three albums in the past year. These albums combine jazz, rap, techno, and trap stylings into a form Adjuah labels “stretch music”. Although his performance may have turned off purists, the all-embracing style, which confronts today’s social issues including police brutality and woman’s rights, may be the roadmap to the future of jazz. The attempted combination of prerecorded beats accentuated the bands performance. Unfortunately the soundman was unable to sync the sound to the bands liking. No matter, the future of jazz will come from New Orleans.

Next came a performance by the legend Ron Carter’s Golden Striker Trio. The eighty-one year old bassist has recorded over 2,200 sessions. He has played with all the heavyweights of jazz including the infamous Miles Davis Quintet, Stan Getz, Wes Montgomery, Freddie Hubbard, and Thelonious Monk to name a few. Guitarist Russell Malone a star in his own right, pianist Donald Vega and Carter all wore black suits, a classic jazz look. The interplay between the trio was equally weighted with the conventional back and forth, call and response patterns. The most accomplished bassist in history performed his magic. The trio’s syncopation, fluidity, and clarity produced a tight 45 minute set of standards that left the audience wanting more. 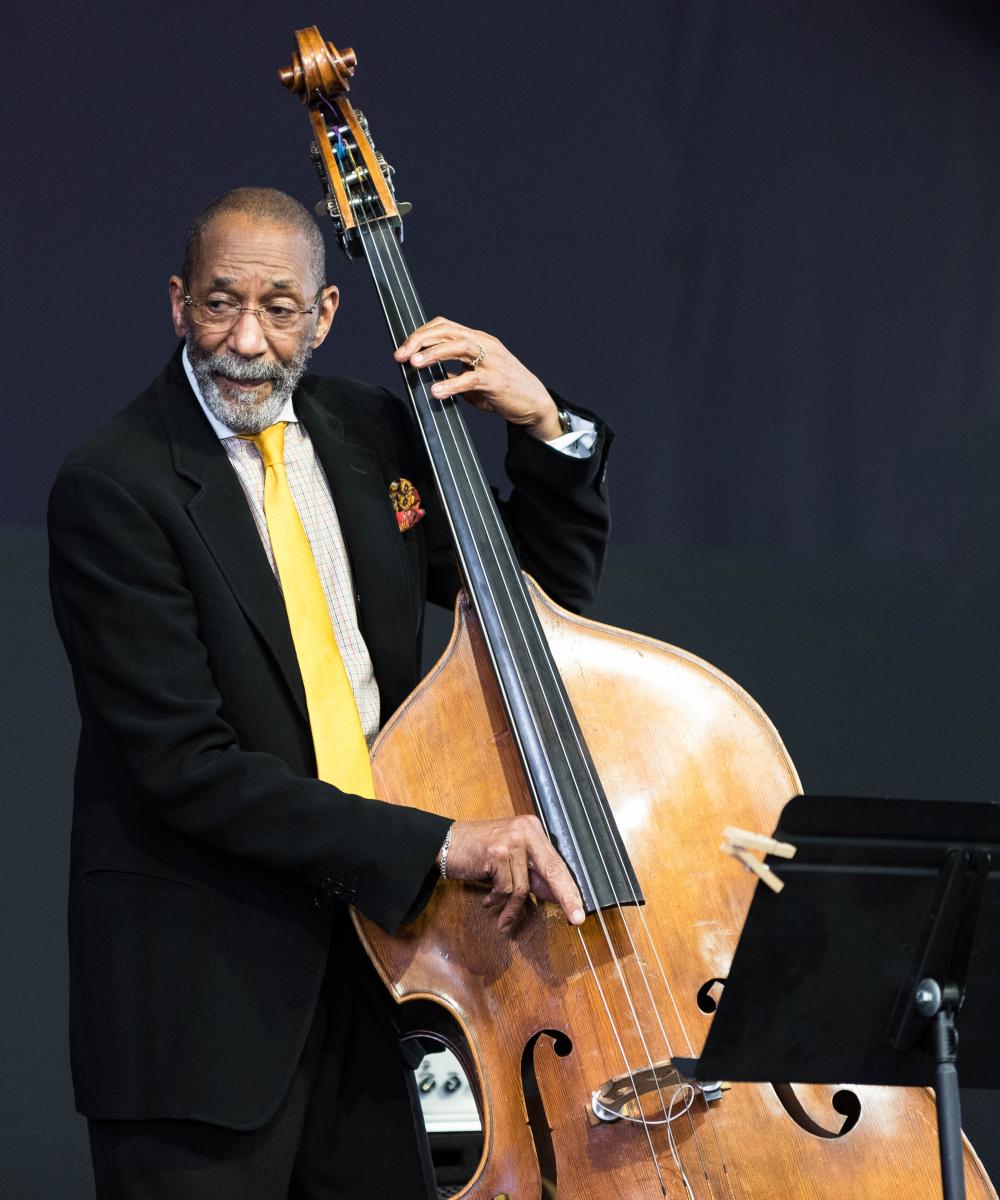 For the final performance of the day I chose Sturgill Simpson over the main headliner Sting. Simpson and his band entered the stage with New Orleans own 610 Stompers. The dance krewe of nearly two dozen middle aged male dancers shook their money makers as the band jammed into their first song. Right from the start the four piece band demonstrated their power. Simpson’s jam heavy set and exceptional guitar playing more than made up for his lack of interaction with the crowd. Local saxophone player Brad Walker who was featured on Simpson’s latest album also played on a handful of songs. One of the highlights of the set was the country medley played during “Long White Line”. Often labeled as a country artist, Simpson brought his rock show to New Orleans. 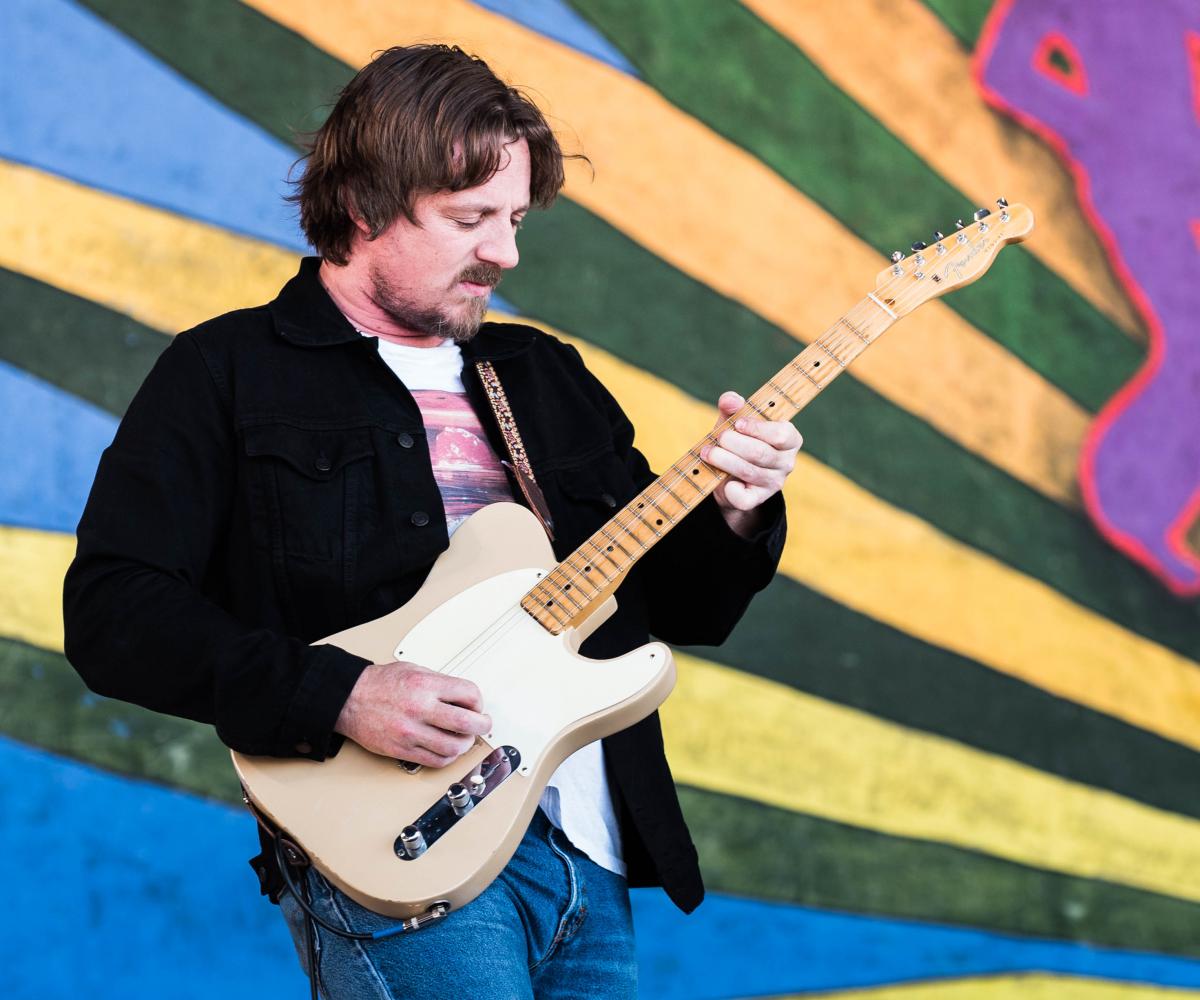 Saturday began with another beautiful day and the Nigel Hall Band. The vocalist for the jam band Lettuce led his own funky solo project into the morning time slot of the festival. Hall, transplanted to New Orleans from Washington D.C. brought an infectious fire and energy to the stage. His charismatic presence and voice demonstrated that he is a soul force to be reckoned with.

The day was highlighted by the tribute to New Orleans own Fats Domino. At noon a ceremonial jazz funeral took place across the Fairgrounds. A marker was placed with over a dozen others in the ancestor area which celebrates musicians and cultural bearers who have passed. After the memorial Gregory Davis, of the Dirty Dozen Brass Band organized a tribute concert featuring Domino’s band and a lineup of special guests. New Orleans musical luminaries Deacon John, Irma Thomas, Jon Batiste, and Davell Crawford contributed songs along with Domino’s son Al “Little Fats” Jackson. Jon Cleary and Bonnie Raitt shared the stage to perform “All By Myself” a tribute to Domino and Charles Neville. Jackson concluded the memorial with “Blue Monday” and “When The Saints Come Marching In” Unfortunately an all-star finale never materialized.

After honoring New Orleans past I wanted to experience something a bit more contemporary. The answer was Big Freedia, the queen of bounce was performing across the fairgrounds. Dressed in a glittering gold shirt with black denim jeans seductively cut up the thighs Freedia and her endless entourage of twerked nonstop. Fans, big and small were brought up onstage to shake their stuff. After performing an over the top performance of “Gin In My System” Freedia led a choir through a series of gospel classics. This Jazzfest performance demonstrated there is much more to Big Freedia.

Following Big Freedia was Chicago native Common. Dressed in a yellow jacket, white t-shirt and black jeans the rapper attacked the stage with “Time Travelin’ (A Tribute to Fela)”. Throughout his performance Common asked the audience to put up their fists in unity and honor the black people who have lost their lives to the hands of police brutality. Towards the middle of his performance Common invited a female NOPD Officer to the stage. Officer Taylor St. Charles spent the better part of four minutes being serenaded. Common freestyled about the officer and New Orleans, dropping names of neighborhoods and streets around the city. Common concluded the set with “The Light” a perfect ending to a highly charged socially conscious set.

For a second day in a row another jazz legend was featured at the festival, eighty year old Charles Lloyd and his latest band The Marvells.

The additions of Bill Frisell on guitar added an added texture to the transcendental music. During the second half Lloyd introduced Lucinda Williams who will be contributing 5 songs to Lloyd’s next album. A number of blues classics were shared including Blind Willie Johnson’s classic “Nobodys Fault But Mine”. At eighty years old Lloyd has decided never to rest on his laurels. He is always looking for new and exciting collaborations.

After having my mind blown I was looking for something a bit more familiar. Jack Johnson, who is from my home state of Hawaii, was exactly what I was looking for. Johnson’s four piece band was spread over the large stage. Johnson, on acoustic guitar, t-shirt, and slippers (flip-flops) brought that summer beach vibe to New Orleans. Johnson had an easy banter with the crowd sharing a story about spending time on Willie Nelson’s tour bus. Johnson also invited the band Fruition to sit in for “Big Sur” and “Breakdown”. It was a perfect way to end my day.

On Sunday morning I went to church. No, I didn’t visit a local New Orleans parish, instead I spent the morning in the Gospel Tent with The Rocks of Harmony and The Electrifying Crown Seekers. The multigenerational Rocks of Harmony have been together for almost 70 years. 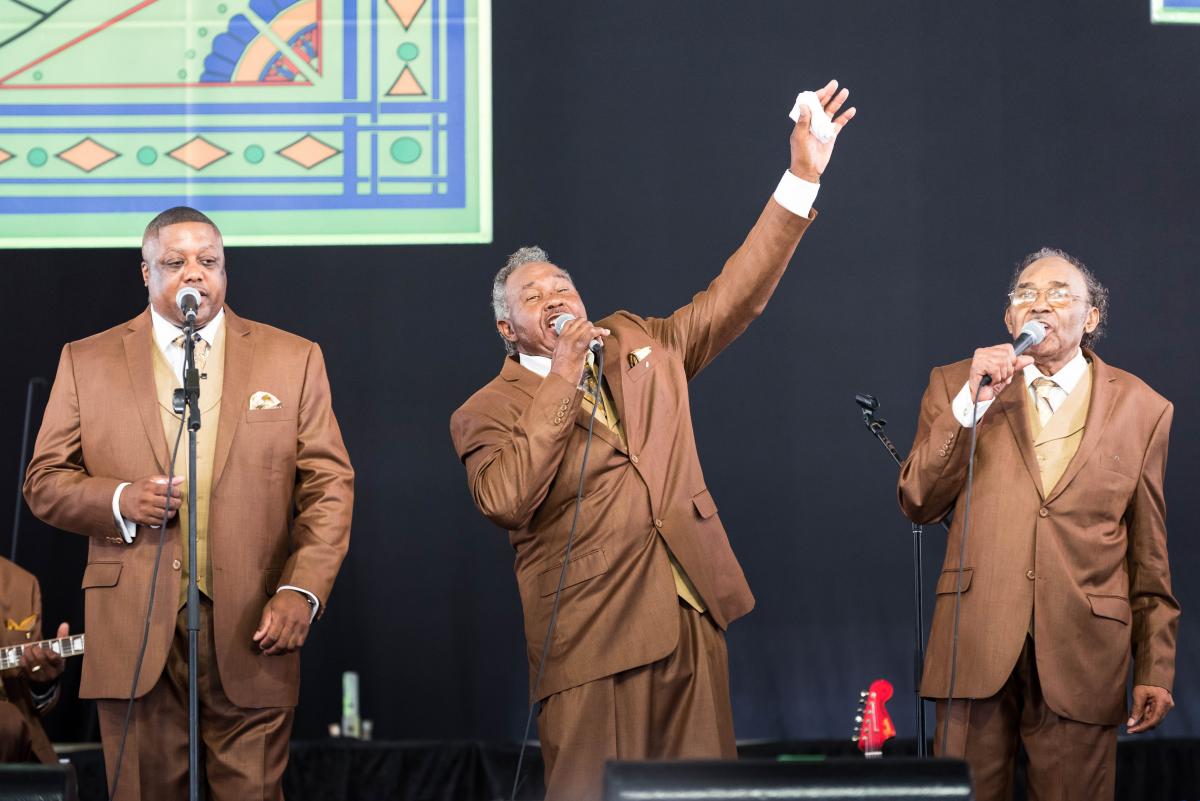 The majority of the ensemble set was fast paced with driving tempos. The Electrifying Crown Seekers never let the crowd catch its breath. The floor stomping Jimmy Reed guitar styled music is layered with four part harmonies. Both of these bands get you out of your seat. If church was like this….I may have become a church going man.

What is Jazzfest without brass bands? The To Be Continued Brass Band began on the streets of New Orleans in 2002. They were a fast up and coming band with fire in their eyes. They eclipsed many of their counterparts in a very short time. Although they have matured the band is still one of the top brass bands in the city. Time has passed and the band now have their own children that are invited onstage. The music and culture will live on.

Next up came Sweet Crude. This six piece band originating from South Louisiana blends progressive music that embraces the regions French-speaking tradition. The seven piece band with four drummers, a horn section, and synths mixed Cajun French and English to produce a joyful set of tribal rhythms and pop hooks. 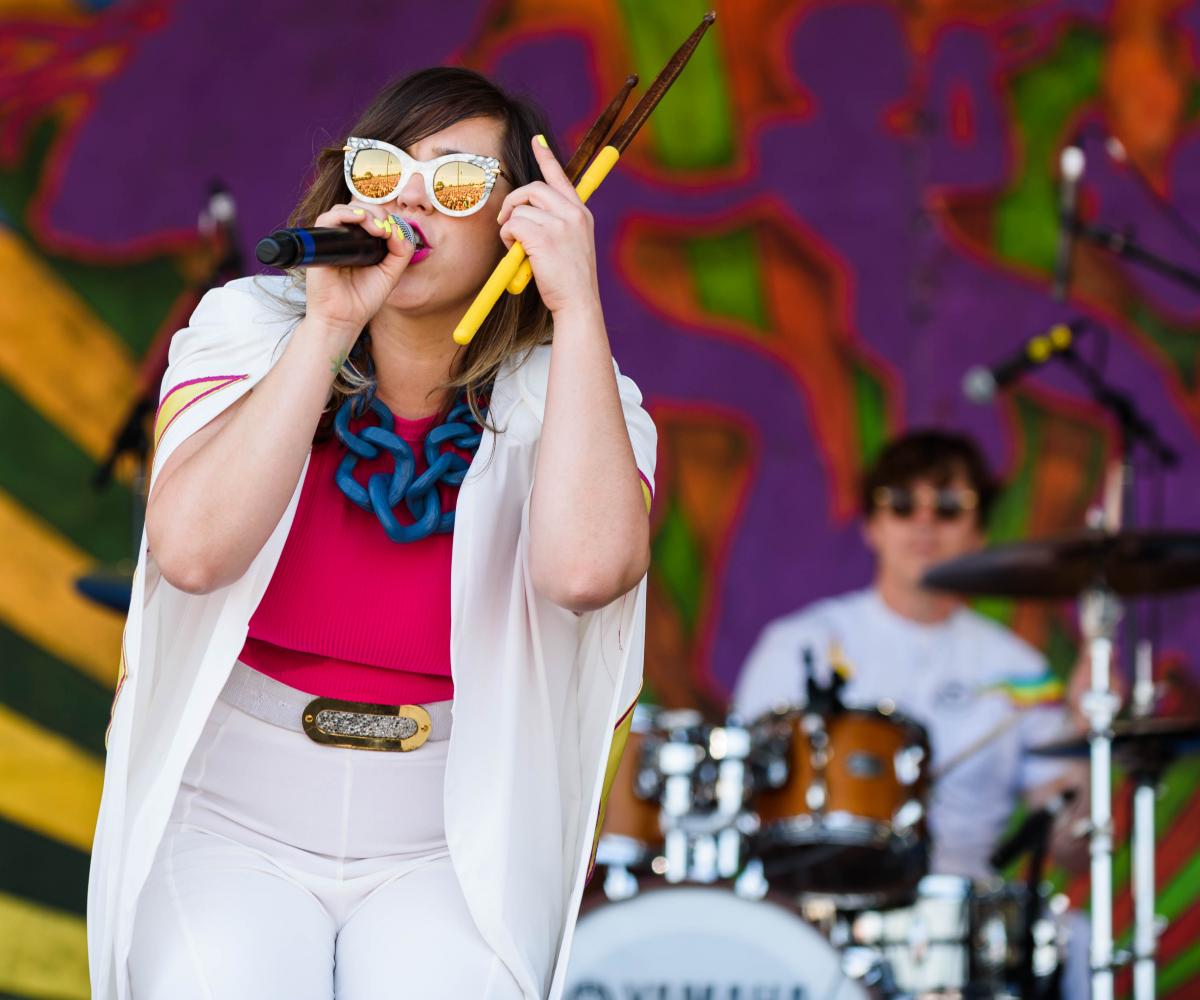 Following Sweet Crude’s was Jon Batiste and The Dap Kings. New Orleans highest profile musician is the band leader for Stay Human the house band for CBS’s “The Late Show”. The Dap Kings may be best known as the backup band of the late Sharon Jones and Amy Winehouse. During the performance Batiste and the band added their own spin on the standard “I Can’t Give You Anything But Love”, the Pointer Sisters “Yes We Can Can”, along with Fats Domino’s “Ain’t That A Shame”. Batiste did it all, sang, played the melodica, keyboards, and piano. Batiste proved that today’s talent coming out of New Orleans is top notch. I’m looking forward to the combined tour of Batiste and the Dap Kings over the summer.

The final act of the weekend I attended was David Byrne. After Jon Batiste the stage was stripped bare. Stage hands meticulously placed a single small table, a chair, and a plastic brain was placed onto the table. Byrne appeared on stage barefoot, and in a grey suit, sat down at the table, and to prerecorded music sang “Home” while pointing out areas of the brain. Byrne was then joined by ten musicians also with identical grey suits and portable instruments with wireless mics. Byrne and the bands performance was perfectly choreographed, a marriage of sight and sound. The crowd was in awe of the performance. The mix of solo and Talking Heads compositions had everyone dancing. Byrne could have sent everyone home with “Psycho Killer”. That would have been too easy. Instead Byrne and his entourage covered Janelle Monáe’s #BlackLivesMatter anthem “Hell You Talmbout,”. The powerful ending demonstrated Byrne’s performance was not a nostalgia trip but a poignant social commentary.

Weekend one ended on a very high note. Overall it was an excellent weekend. The weather cooperated and the crowds were not outrageous. I was introduced to a number of musicians and reacquainted with some old favorites. There were only three days until the second weekend of Jazzfest…….