And today’s feature artist is a gent I hold very dear to my heart. My good pal and occasional musical collaborator, Mark Kilianski. Mark firmly plants his feet in the roots/folk/bluegrass realm but is as versatile a musician as they come. He really is one of these people who is in this business because he loves music and that feeling is so genuine with him its hard to not just be swallowed up by his music and personality. Mark answered our questions laying down on his couch while I recorded them on my iPhone (I guess I was kind of like a musical shrink?)…I transcribed that conversation to the best of my abilities. Here you go:

1) First and foremost, who are you, what do you do? That is, what band are you in or are you a solo artist, what have you guys been up to leading up to the festival, anything exciting we should all know about? Your chance for shameless self promotion…go!

MK: I am Mark Kilianski and I grew up in New Jersey where I played a lot of rock and jazz music. Living close to New York City, it was a good place to learn about jazz and I picked up the guitar when I was 13 and started off playing rock, got into jazz, and then when I got to Berklee I found the roots music scene with all the bluegrass, and oldtime and celtic players and stuff. I had a taste of that before but never really got super into it and so once I was surrounded with players of it I just fell in love with it. Now that’s the basis of my sound as an artist. I am a songwriter and I now consider myself a “singer” – after many years of trying and failing (laughs). So I write songs in that vein, learn traditional songs and play songs in the traditional bluegrass and folk idioms. I just want to spread good music and good messages throughout the world

2) Name a record that shaped you as a musician early on. What music initially made you want to sing, or pick up an instrument and make music?

MK: What made me want to play guitar was actually stuff I don’t like at all now. I was really into Korn and Limp Bizkit and Godsmack…all that stuff because I was 13 and I was really angry. I guess I really identified with that music and it kind of spoke to me. So I wanted to play guitar because I wanted to express that and express myself and share the good feeling playing gave me with other people. From there my tastes changed, obviously and my guitar teacher got me into good music. You know, classic rock like Zeppelin, Allman Brothers, Rolling Stones, Black Sabbath. Black Sabbath “Paranoid”  was the first album that I like played, I put on the album and I just played along to the whole thing. Through the whole album and so that was my introduction to what I was primarily in to for the beginning of my musical life. The blues rock, classic rock, heavy metal kind of thing.

3) What are you listening to now that you think folks should be aware of? Anything local that just stands out and people should know about?

Let’s see, local stuff….there’s this guy that I played a few gigs with and I recorded a guitar track on his album and his name is Eric Law. He is a cello player and he plays some bass too and he is just a great songwriter. He is kind of in the same vein as me, as he takes great inspiration from old time music and traditional music. You know, American roots music and he just writes the saddest, most lonesome songs…and he is a killer cello player too! I would say he is probably the one person that people should check out.

4) Music festivals, in general, are fairly well known for surprise sit ins, improvisational jams and collaborations. If you could see any two of this year’s acts collaborate on stage at this year’s NEA Festival, who would you like to see? 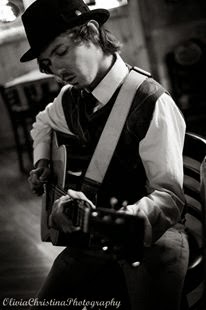 MK: Hmmm, I am going to have to think about that. Well we have got all the regulars like Brian Carroll, John Colvert, Patrick Coman, The Whiskey Boys, Chasing Blue, Eva Walsh, Mark Whitaker. Ummm Dietrich Strause, who I haven’t really heard. I have heard about him a lot and I know him from around town but haven’t heard much of his music. It would be kind of cool to hear Eva Walsh and John Colvert because their singing styles are so different, if they sang a duet it would be like in Beauty and the Beast (laughs and re-thinks the phrasing of that). And that’s not a bad thing, I think that would be really cool. Just a really cool collaboration.

5) New England Americana and the Fest firmly plant their roots and morals in “community”. 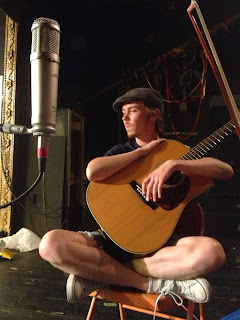 nt is a culmination of a community of musicians and artists that is going on all year. What does that community mean to you?

MK: For one it’s a chance to foster creativity by sharing our music with each other. With people who we know as friends and have a lot of love for one another and we respect each other through enjoying each others music. When all these people you respect like your music and the feeling is mutual, its just really good for everybody. Also, business wise and promotion wise it’s a really good thing too. We are all helping each other and promoting each other. None of us alone could really do this much, the festival is a combination of everybody and by that happening…it’s the New England Americana Festival. It started out as a not very big thing that sounded pretty big, and now it’s grown into an actual really big thing. And that is good for all of us.

6) Why is creating music important to you? Why do you pick up your instrument and write songs? Why do you play that dive bar on a Thursday night? What keeps you going?

It’s the best way I have to express myself. Its really the best way that I have to connect with other people. When I started playing, I was 13, you know, you are super awkward and in puberty. I went to middle school and I realized that all of my friends were assholes. I was probably an asshole too, because everyone is an asshole in middle school. But music helped me make goood friends and the relationships that you create through music are great. Like the people that I see around town at shows and collaborate with. They are people that you may not see every day of your life. You could go weeks or months without seeing them, but when you see them again and you just hug each other. It’s just great, it’s a beautiful thing.

He is playing two sets at the festival (and I am sure he may pop up in a few other performances as well!). On Friday night he is with his bluegrass outfit Mark Kilianski and the Moonshine Ramblers at 10:10 PM on the Tasty Burger Bar stage and then he will be playing with Brian Carroll as a guitar/mandolin duo yet to be named at Club Passim at 8 PM on Saturday.