Back in July I attended the Newport Folk Festival and recapped my day-by-day here on the blog. Well, two weeks ago I attended the New England Americana Festival (yeah…shocker for all of those who know who I am. I realize I am a little bias here, so bear with me). As heavily as I am involved in the festival and community here in the city, there was a ton that really surprised me, both how it played out as well as new artists I discovered through roaming from stage to stage. The entire weekend was a complete whirlwind of setting up, breaking down, running from place to place, and in between it all being completely and absolutely humbled by what was accomplished and the overall sentiment of sincere love and care within this scene. Amazing stuff.

I thought it important to document my time at the fest, the pre-party, and the aftermath of emotions that took over my mind. Come on the trip with me…

“Day 1” (not officially, but technically) was the special invite only, CD release, kick-off event at the Lizard Lounge right up Mass Avenue from the NEAF’s heart in Harvard Square. Aside from my own set, this was likely the highlight of the weekend for me. Basically, it was one of my favorite rooms in the city completely filled to the brim with amazing musicians and incredible people supporting one another and being excited for the next 3 days. It was a loose kind of night, people jumping in with each other in the middle of songs, sporadic jam sessions, and the two NEA recording projects playing through the speakers in between all cast over the Lizard’s “speakeasy/opium den/relaxing” vibe of a listening room.  I won’t go on much more, but all I can say is if you were there you “got it”, and if you weren’t, I am sorry that you missed it. It was truly something special.

I am pretty sure that every time I have had the pleasure of seeing Ms. Eva Walsh perform she is surrounded by a bunch of other talented folks. Whether she is adding her incredible fiddle and harmony skills to other people’s music, or sharing a stage with others and highlighting her own tunes, I am pretty sure I haven’t seen “just Eva on a stage, singing and playing”. Passim was the perfect stage for her to kick the entire 3 day shebang off at. The dimly lit room was deathly silent as she went back and forth between fiddle, guitar, and ukulele singing in her soulful, sultry, yet playful and joyful, voice. She just really makes me smile when I get to catch her playing. You just know that she absolutely loves the art and being on a stage…and it’s where she belongs. I sauntered over to Tasty Burger to see what else was going on to see Liz Frame and her band, theKickers setting up shop. I was intrigued by the gal bass players upright stick bass, so I stuck it out for a bit and was damn happy I did. They play an upbeat, rocking kind of music. Liz kind of sways and dances along to the songs in a hypnotizing way during the breaks and the whole set is really just intriguing. The band plays off each other really well, you can tell they are all pals and just having a blast. Though, throughout the weekend Tasty’s acoustics were an issue, the band sounded great getting people moving and grooving to their buoyant and raucous set. 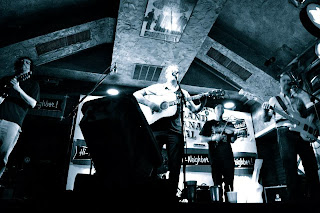 From Tasty I ran across Winthrop to Tommy Doyle’s to catch my pals Sam Reid and Riot Act. Not only was Mr. Reid tearing it up on stage, but I had the pleasure of doing my damndest to catch Joe Kessler on camera as he moved around the stage playing the hell out of his blue fiddle. With John Ransom holding down the low end, the boys rocking brand of bluegrass tunes really kept the crowd moving, stopping for a second to be in awe of the solo that was just played, and then start moving again. These guys never disappoint.

I figured I hadn’t had enough of the Tasty Burger, or bluegrass music for that matter, so ran back across Winthrop for my buds the Whiskey Boys. Every one of the fellas in this band are top notch musicians on their respective instruments, but what has really left me pleasantly surprised is Dave Delaney’s development as a front man and songwriter. His voice has really settled into its comfort zone and his writing has matured like…well…a really excellent whiskey! The gents played to a great crowd who were really digging what they were laying down, always good to see good friends appreciated! 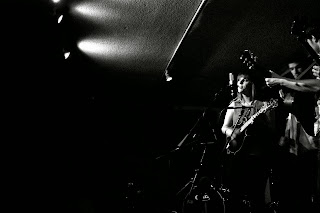 Girls playing mandolin and banjo…did I die and go to some strange Americana heaven? Oh right, and the gents in this band are absolutely INSANELY talented too. Chasing Blue took the stage at Passim and the juxtaposition of crowd being “pin drop” silent and out of their seats applauding was remarkable. There is the “wow” or “it” factor that industry folks talk about and whatever that may be, these guys have got it 10 times over. Really amazing, amazing and beautiful set of music to witness. 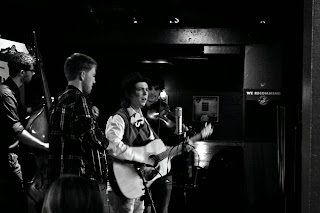 Man oh man…can I just say that I know Mark fairly well. I have seen him perform many times, performed with him many times, but this night he was o
n f***ing fire. His inner performer really ripped itself right out of him this night and he was just impossible to turn away from. Mark Kilianski and Moonshine Ramblers in this instance were a crew of stringed things picking out bluegrassy folksy originals, a few instrumentals, and just great music for all the folks at TB to hear. I have to say, my highlight was a fiddle tune penned by the Ramblers fiddler player, John Mailander. It was a reallyincredible arrangement and the band just got in an undeniable groove that you don’t witness all too often.

I caught the tail end of The Mallett Brothers set leading into Coyote Kolb’s set and couldn’t take any pictures the room was so rambunctious. Holy hell, people dancing, drinking and just having a raucous ol’ time. It was something to be seen! 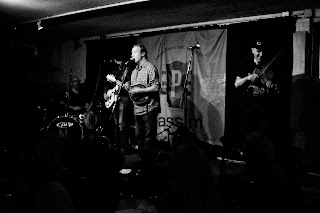 The final set of the night for me was Jimmy Ryan and Hayride at Passim. This was a special set for me, as Jimmy approached me after the show and let me know he has been in a bad spot lately and a little sick…by the way the band played you would never have even guessed it. The man was just unstoppable on the 8 string. They guys played some old favorites, did a couple tunes I hadn’t heard before, and it was just a really great close to day 1 leaving me with full energy for the rest of the weekend.