To celebrate the 2013 release of: Townes Van Zandt, “Sunshine Boy”, I thought I would tell you my personal story and experience with Townes Van Zandt instead of reviewing the new CD collection although it is very good and I do recommend it.

Back in 1982 or so in Seattle, Washington, my then girlfriend Britt and I set out from Bellevue, Washington to the “U District” in Seattle over the Evergreen Point bridge with high hopes! For you see this was a special night for both of us since we were on our way to go and see one of our idols the great: Townes Van Zandt at The Rainbow Tavern. And since I was a young developing Singer/Songwriter just learning his way in the world with a guitar and a pocket full of songs, this night I was going prepared with at least a few songs on cassette tape for Townes. But it wasn’t quite as easy as I just made it sound for you see I was very shy about my own material since I had only been playing, singing and writing since 1979, three years for those of you counting.  Although a few miles from Bellevue, we made sure we left early in hopes of meeting Townes in person.  We got there early as planned and found a table for two and began waiting for the show to start by drinking beer and keeping an eye out for Townes.

As I remember it, three special people entered, two of them were guys carrying guitar cases and the other was a young lady with blond hair who appeared to be part of the tour. I believe the other guy was Mickey White, Towne’s lead guitar player. It didn’t take me long to muster up the courage at this point to approach the tall & lanky Townes Van Zandt with my tape in hand. I don’t remember now exactly what I said to Townes when I handed him my cassette tape but it was probably something like: “Here’s some songs I wrote Townes…can you listen to them?” As I look back on this small and humble gesture now, I smile as I know that Townes Van Zandt was the first guy in the real “Music Business” that I gave a tape to. Of course now it is easy to look back and marvel at how lucky I was to give a tape to a true living legend. How I knew he was a legend at the age of 23 is kind of prophetic. My main guide at the time was a double vinyl album I owned and constantly listened to called: “Townes Van Zandt: ‘Live At The Old Quarter.” (I wish I still had it now too). My favorite cuts were: “Waitin’ Round To Die” & “White Freight Liner Blues.” I drove my Mom nuts I think by either playing the album over and over or simply playing: “Waitin’ Round to Die” myself on my guitar with my own vocal.

Well the beers kept coming and someone I do not remember now was playing before Townes took the stage. And then as I looked up from our table, not far from the stage, Townes came right up to us, pulled my tape out of his front pocket and said directly to me: “I’m gonna listen to this!” I was flabbergasted! Most stars of Townes’ quality and level would be hiding out backstage or anywhere else then walking around in the audience as casual as could be. I just nodded trying to keep my cool and not trying to be some kind of super fan. I’m sure Townes would have been glad to take a picture with us or sign an autograph had I asked but I didn’t even have a camera with me (stupid).

Soon it was time for Townes and his guitar player to take the stage. It was all acoustic…just the way we liked it although a little rare in 1982…the era of Pop & New Wave on the West Coast. Townes was mostly from Texas as far as I could tell. Although years later I would learn from the excellent documentary: “Be Here To Love Me” (2006) that Townes was from a number of locations including: Colorado, Texas, Tennessee.

Well this great night in 1982 went by in a most joyful way including a set break where Townes lost the keys to his truck and a large percentage of the audience just got up and left. So, Townes found his keys (45 minutes later) and then returned alone to play his second set. His first song was an acoustic version of Bruce Springsteen’s  “Racin’ In The Streets”…pure poetry coming from Towne’s performance. Although Townes had been drinking as well, nothing seemed to get in his way as long as he was on stage. This was a great night but it had to end. My girlfriend Britt and I went to get in my Volvo 122s and make the drive back across the bridge to Bellevue.

MY SECOND MEETING WITH TOWNES:

Then, in 1994, Townes came through Portland, Oregon with a Nashville friend of mine…Steve Young (“Seven Bridges Road”). I called Steve to see if I could get on the guest list and maybe even backstage? Steve said “yes” and I was set to meet up with both Steve & Townes. By now I had been produced by Norman Petty, had a band called: “The Surf Cowboys (USA)” in Portland and another band in Seattle called “The Vaqueros.” Needless to say my own road miles across the US and three visits to Nashville had hardened me and I was not the new songwriter I was the first time I met Townes in 1982. This time I didn’t have anything to give Townes backstage except for my own warm admiration.

So, when I did go backstage, I said my hellos to Steve and then sat down next to Townes. Once again I did not have a camera with me. Townes and I were sitting on a bench next to each other and Townes was drinking something from a bottle in a small paper sack and seemed kind of sad to me. This was the last time I saw Townes in person. He would die, New Years day in 1997 at the age of 52.

I would go on to write a song about Townes called: “My Friend Townes” and I also did an art collage by the same title (pictured at top). Although Townes did not really know me, I felt our two meetings made us friends in a way. And I can say I met Townes Van Zandt not once…but twice. Those will always be two of my fondest memories. “My Friend Townes.” (c)1994. 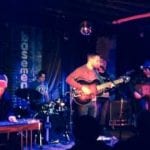