Crack, award-winning Australian bluegrass and roots outfit Mustered Courage are embarking on another extensive tour of the USA, returning for a lengthy run of dates in 2015.

The band won a Golden Guitar last year, one of Australia’s most cherished roots music awards.  The 2015 tour will include twenty-plus dates across the country, leading to an appearance at The Telluride Bluegrass Festival.  Known dates are below – check here for updates and ticket info, as more shows will be added.  Mustered Courage have finished the new album, with a single to be released soon.  So the shows will be jam packed with new material, to supplement the excellent debut release Powerlines (2013).

June 10 I One Spot Deli I Ashville, NC 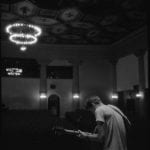