Mountain Faith: The Real Life of an Emerging Bluegrass Band

Sylva, North Carolina, lies just short of 50 miles southwest of Asheville, the largest and most cosmopolitan city in the western part of the state. It’s a small town of around 2,500 people, the seat of Jackson County. It’s the closest town to Western Carolina University, one of 17 divisions of the University of North Carolina.

Driving up to Sylva from Shelby recently, it felt as though we had left full-blown spring and traveled back six weeks in time to early-spring — yellow-green leaves sprouted from the trees along the road, with the foliage at the mountain tops yet to leaf. We drove up four-lane US 74, gaining about 600 more feet of elevation, until we saw our destination: High Country Tires, on the left.

This shop is run by Sam McMahan, the father of two members of bluegrass band Mountain Faith — the bass player and emcee for the band — along with Sam’s brother Mickey.

My wife and I pulled in, parked, and strolled into the convenience store part of the business, where singer and fiddler Summer Brooke McMahan was talking on her cell phone and handling the cash register at the same time. Summer’s brother, Braydon, was taking a break from mounting tires to have a quick soda. Cory Piatt, Mountain Faith’s mandolinist — who’s been a touring musician for half a dozen years at age 20 — came over and hugged both my wife and I.

Eight months ago, this faith-based, bluegrass band reached the semi-finals of NBC’s summer entertainment hit, America’s Got Talent, but this is more along the lines of their everyday. 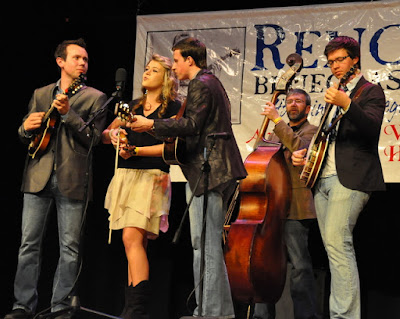 We first saw Mountain Faith at RenoFest — a small, early Spring indoor festival in Hartsville, South Carolina, in 2011. RenoFest is noted for its instrument and band contests. Competitors come largely from the Carolinas, but also travel from as far away as Texas, Ohio, Tennessee, and Georgia to compete. Mountain Faith placed third in its 2011 contest. That same yeaer, the group was selected to perform in a live radio showcase that Washington, DC’s WAMU Bluegrass Country used to conduct during IBMA‘s World of Bluegrass, then held in Nashville. During five music-packed afternoons, 30 bands each performed for live shows heard around the world.

And then came America’s Got Talent.

America’s Got Talent is a popular summer replacement show on NBC. By making it through the show’s initial stages and the quarter-finals — where live judging of the acts begins — into the semi-finals, Mountain Faith gained a higher national profile for themselves and for bluegrass music. As a result of that raised profile, the group recently appeared at an Atlanta Braves Baseball game to sing the National Anthem.

Back at High Country Tires, though, when we walked in we found Summer McMahan standing behind the cash register, talking on the phone, and taking a payment from a customer who had bought some gas and a snack. Perhaps she knew we were coming, but she was the natural presence we have come to know and value through her performances at festivals we’ve attended over the past two years in Georgia and Florida. She is sweet, unassuming, funny, and forthcoming.

Summer is finishing her college degree these days, majoring in marketing online at Liberty University. The band’s traveling schedule has become too onerous for her to continue attending classes at Western Carolina University in Sylva, where she already completed three years. 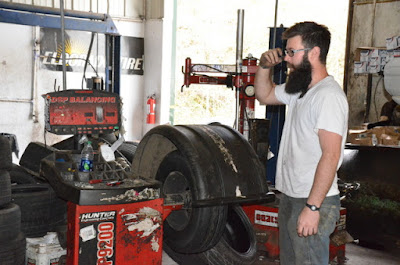 We’re used to seeing Braydon McMahan with a banjo in his hand — he’s an incredibly skillful player. Indeed, Ernie Evans, a Florida promoter, says he thinks Braydon is one of the best rhythm banjo players he’s ever seen, as well as a fine soloist and harmony singer.

During our visit, Bradydon took a few minutes off his tire work to visit with us, but mostly he was back in the shop putting tires on rims. The tools seemed as natural in his large, rough hands as does the banjo. 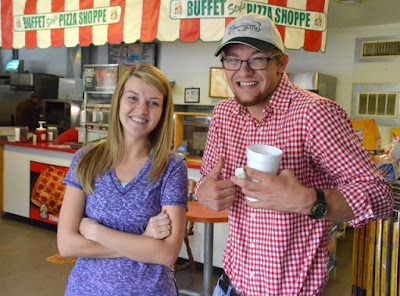 Cory Piatt has lived with the McMahan’s since joining the band almost two years ago — a few months before his 20th birthday. Piatt has been a professional road musician since his mid-teens — he toured and recorded previously with Kenny & Amanda Smith as well as the Sleepy Man Banjo Boys. His virtuosity on the mandolin — plus his warmth and creativity in working on arrangements — brings great value to Mountain Faith’s music. I doubt that he is spending much time risking his hands around the tire machines. His enthusiasm and innate friendliness, however, lend themselves to being the “official greeter” at the door of the store.

Brothers David and Jimmy Meyer were away when we visited, but they, too, add significantly on guitar, fiddle, and bass. Members of the now disbanded Meyer Family Band from Missouri — all of whose members have joined other bands — the Meyers joined the band after its run on America’s Got Talent. They bring poise, professionalism, and musicality to this groupd, helping round it out into a voice of its own.

That voice is built on the band’s religious faith, developed through several years of touring and maturing, challenged by a national “reality” show competition which stretched their performance parameters at the same time as opening new doors for them. Its members maintain their faith and are finding quiet, effective ways to proclaim and live it, while spreading their music and popularity to new, ready audiences.

Few bluegrass bands — even those who are successful — are able to make enough money from performing to not require other sources of income. In this case, three of Mountain Faith’s members are active participants in the family’s tire business. Because their uncle Mickey is on-hand and willing to pitch in when needed, the band is free to travel in pursuit of their music. This is common for bluegrass bands and musicians. 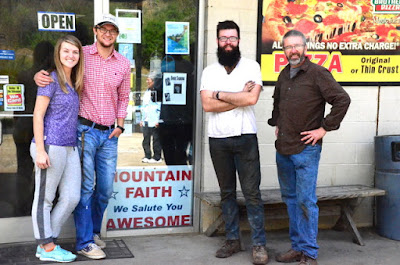 Mountain Faith’s musical mission has broadened as new opportunities have opened new audiences to them. They have chosen a route that requires courage and forges the way for other bands. They’ve fused the musical background they came from — bluegrass and gospel — with elements of country and pop music, extending beyond narrow genre classifications. The group has moved out of its comfort zone, and has begun to receive support from a wider audience. Because of who they are, how they live their lives, and their broadening appeal, Mountain Faith just might be able to bridge the gap to a successful touring career while remaining popular with their core audience.

This year, Mountain Faith will be performing from coast to coast, from south to north at festivals, stadiums, and churches. This is an emerging band worth watching and treasuring. See them at an event near you.