I will always remember sitting in the movie theater as a kid watching Leon Russell steal the show during The Concert For Bangladesh, wondering who and what this mystical force was. It was no small feat since he was a piano player on a stage that included George Harrison, Bob Dylan and Eric Clapton.  I guess you could say It was the experience of having my mind blown.

A few years later I came out of the news store in my hometown of Ridgefield, Connecticut  with Circus Magazine in my hand.  “Why are you reading that junk?” my grandfather asked me as I got in the car.  I was beginning to get consumed by rock and roll and this was my lifeline to a world that I was unconsciously training myself to write about in a few years.

There was Leon on the cover, sitting at his piano looking to this twelve year-old like he was the biggest star in the world . I knew who he was and had memorized every nuance of his medley of the Rolling Stones’ “Jumpin’ Jack Flash” into “Youngblood” and back. There was this bridge in between in which he turned Madison Square Garden into the world’s largest club, showing the gifts of oratory and lessons he’d learned in church as improvised and spouted off line after line for a few minutes that built the suspense, all about this young girl that was standing on the corner. He turned a playful and catchy pop single by the Coasters into a thunderous jam, bookended by “Jumpin’ Jack Flash” at a sped-up tempo that turned it into frenetic southern soul and made the original seem almost tame.

Leon Russell seemed like he always had star power of his own. There was a starburst of light reflecting off the shades on the cover of his album Leon Russell and the Shelter People. When he released his live album Leon Live, the sheer weight of its three discs were worthy of a try rock star.

And then there was the company he kept, helping produce Joe Cocker’s Mad Dogs & Englishman and being part of its traveling troupe. He was not part of one all-star entourage but two as he kept company with Clapton, Harrison and rock royalty as part of the caravan of Delaney and Bonnie and Friends.

At the time I didn’t know much about this mysterious figure behind blue eyes and  dirty gray beard. I didn’t know about his lineage as a member of the Wrecking Crew, a fraternity of great session men that graced some of the greatest records ever made. George Harrison once called Ike and Tina Turner’s “River Deep Mountain High” a perfect record. Guess who played piano on it? It was Leon Russell.

I had to put the pieces together and figure out who Hank Wilson was when Leon Russell told me he was back (reference Hank Wilson’s Back, Volume One). But I could say I knew some of Leon’s songs. Growing up listening to top forty radio, his signature “A Song For You” was made popular by the melancholy of the Carpenters and I can still remember flipping the cover to see his name in parentheses underneath the title. It had a run as one most covered songs over four decades , including versions by Ray Charles and Willie Nelson, the latter with whom he would do a double album of standards.

Over the years, Russell would mentor others, perhaps without realizing it. One such person was Johnette Napolitano who worked for Leon in the studio in the early Eighties before she formed Concrete Blonde.

“An education is what I like to call it,” she recalled to my friend Steve Houk in an interview she did for Midlife Rocker. You go through a special initiation in life when you work for Leon Russell. I was gonna say someone like Leon Russell, but there was nobody like Leon Russell.

“When you worked for Leon, you did everything. If you had to stay up for three days in the mobile unit on Camera 3 because Leon Russell and Willie Nelson felt like staying up for three days making records, then that’s exactly what you do. Or if JJ Cale drops by, or George Harrison drops by for a burger with Leon, and Leon wants you to find something in the tape library, and you go to the tape library and open the ¼” box for the master of ‘Will Of The Wisp,’ and it’s got pot seeds in it but no tape.”

Napolitano told Houk that Russell was a genius. “He wasn’t just a crazy hippy sitting around,” she related. “He always surrounded himself with the top tech people, the top creative minds. He was so forward minded and open minded in everything he did. He’d get up in the middle of the night and he’d want somebody around. If had an idea, if he wanted to sit around and play or shoot something or whatever, he needed people around to do that. And then he’d be lurking around, at 2 in the morning, and you’d be like ‘Dammit Leon, you scared me man!””

Napolitano recalled how Russell had rooms and warehouses full of suits of armor from medieval times, just like you’d expect from a quintessential rock star. He once owned the recording board on which Pink Floyd recorded Dark Side of The Moon before he sold it.

As the century turned, there was still mystery lurking behind those shades.  The scraggly salty beard had become all enveloping in its pure whiteness. In his later years Russell would sit stoically onstage and be quiet before he would burst into song with the fluidity and on piano that served him so well over the years, By the time he got to the Rock and Roll Hall of Fame, he had recorded an album with another piano player, one Reginald Dwight better known as Elton John.

Elton, who came of age during Russell’s ascendancy, called him a mentor. Flash forward a few decades later, a musician of a younger generation, Todd Farrell, remembered on a Facebook post how he was working as a production assistant at a recording studio in Nashville. Farrell had an errand to run to another studio in town. It was Mark Lambert’s home studio and when he walked in, a bunch of people sitting around the control room listening to mixes of what would become The Union album with Leon and Elton John. 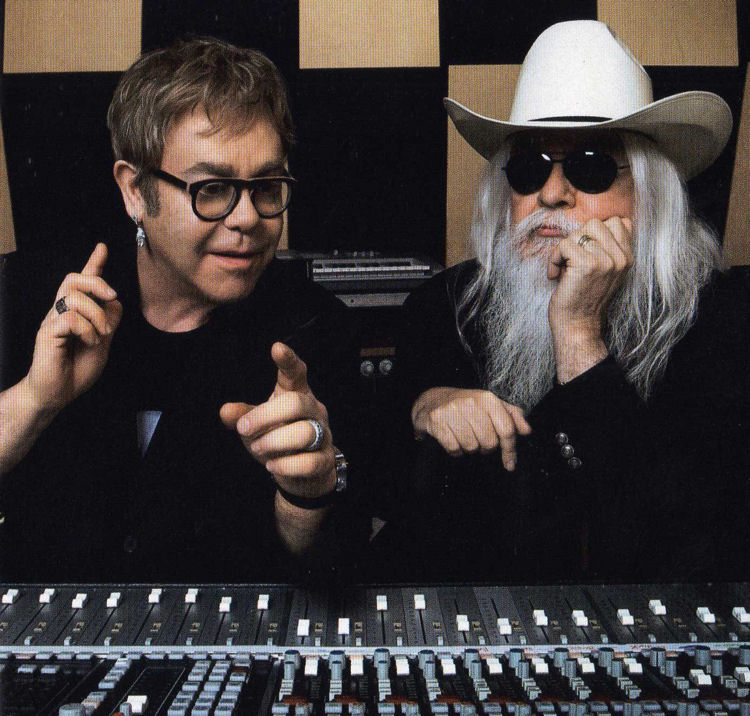 “Mark then introduces me to the big white bearded dude,” he writes. “I was 22 years old, and a green, wide-eyed new kid in the world of Nashville’s “music business”. He was really nice to me and asked questions, which goes miles for a kid making small talk with a legendary musician. Anyway, we shook hands and talked music for 15 minutes before I had to get back to work.”
Farrell never saw him again but those fifteen minutes left a lasting impression.
“On that day, he was really nice to a young musician trying to make his way in Nashville, which in my opinion, counts for a lot.”
A star from another era recalls when she was young and Russell unknowingly helped her. You can see video on YouTube in which Stevie Nicks can be seen talking to Russell backstage about the years when she and partner Lindsey Buckingham were starting out in a band called Fritz. They shared the same stage together as one of Russell’s opening acts. It was the first time she and Lindsey were on the road. “This was fantastic,” she recalls to him. “This was the big time to us.”
On that night, the ghosts of tours past receded into memory. Perhaps because it happened so long ago, Russell seemed a little vague about it all. But Nicks shows her reverence and eternal gratitude, just one of the many people Russell touched over the years.

Perhaps someone else might have viewed it like holding court. But Russell, the southern gentleman, was ever gracious and soft spoken. He seemed flattered by the gesture. Perhaps just a little bit taken back by the attention, as Nicks left, he went right back to what he did best, hitting the keys on the piano.