“Tonight’s bill brings together Doors keyboardist Ray Manzarek, multi-instrumentalist David Lindley (a key member of Browne’s musical circle when his career took off), songwriter Jack Tempchin (an early associate of the Eagles) and Honk, the Laguna Beach-based rock-folk-jazz-surf group that was a regular at the club.

Saturday’s lineup is topped by the Nitty Gritty Dirt Band. Members of the long-running country-folk-rock group met there while watching bluegrass and folk greats who frequented the club, inspiring them to start a band.

Also playing Saturday are Chris Hillman, one of the founding members of the Byrds and the Flying Burrito Brothers, and , his former band mate in the Desert Rose Band. That bill is rounded out by singer-songwriter Steve Noonan, an O.C. contemporary of Browne and Tim Buckley.

Proceeds from the four shows — two each night — benefit Sweet Relief, the Huntington Beach-based group that provides various forms of aid to musicians in need.” 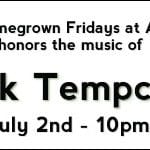