Jessi Colter’s “An Outlaw and a Lady” 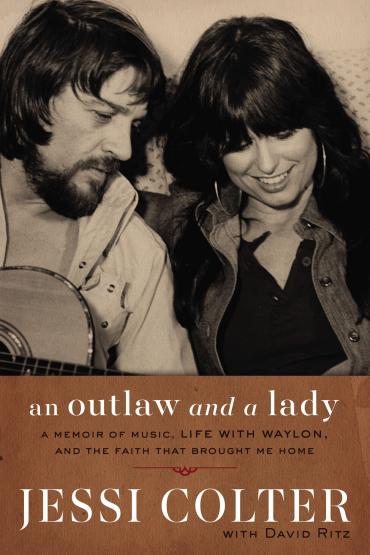 In the now-infamous country anthem of loss (whose words regrettably ring truer with each passing year) “Who’s Gonna Fill Their Shoes,” George Jones warbles about those singers who “tear your heart out when they sing” like one in particular, “the outlaw that walks through Jesse’s dream.” Most folks have taken this line to be about Waylon Jennings and Jessi Colter, and if that’s so, the song reflects the ups and downs of a relationship between two people deeply in love with each other, who traveled through some rough patches but who stood at each other’s sides through the shades of darkness and the revelations of the light.

In her compulsively readable, clear-eyed, and graciously told memoir, An Outlaw and a Lady: A Memoir of Music, Life with Waylon, and the Faith That Brought Me Home (HarperCollins), Jessi Colter (born Mirriam Rebecca Joan Johnson) generously opens her heart to reveal the scars, the hurts, the healing, and the love that she’s experienced. This is not simply a book about life with Waylon—though, of course, her years with him take up about half of the book—but this is a book about a woman reflecting on her journey through life as a daughter, a mother, a songwriter and poet, and a Christian. This is a spiritual memoir that chronicles Colter’s hard-fought battles, her regrets, and her acceptance of herself and those struggles, and, much like her songwriting, it’s a lyrically gorgeous book that wraps the rough edges of life warmly in a colorful blanket of stark beauty.

You need not travel very far into Colter’s memoir to encounter its revelatory power and to get a little taste of the journey that’s to come. In just a few sentences, Colter introduces us to the two defining aspects of her life, music and faith, as she reflects on growing up playing piano in her mother’s church. “As a child, I had first-hand evidence of God’s goodness, mercy, and grace. … And then I had something else: music. … All this music, of course, was linked to the love I was feeling in Mother’s church. She could preach, but I soon learned that I could sing. … The process of channeling music through my heart was—and remains—a natural one. It was clearly a gift … for me, beginning in childhood, music flowed like a clear mountain stream whose source, I learned from Mother, was God on high. Music would prove to be the great instrument of change in my life, the ethereal spirit that would, in one form or another, punctuate my story with one surprise after another.”

As a child, Colter’s faith grows as she listens to her mother preaching at Pentecostal churches on Sundays. Yet she admits that she had questions and was a serious thinker, often asking her mother questions related to apparent conflict between the the natural world and the spiritual realm. She experiences her first crisis of faith after her brother, Paul, dies, and she ventures into a relationship with Duane Eddy. “I prayed that the spirit imbued in my parents—the spirit that had them venturing forth into the wide-open spaces of the glorious deserts and mountains of Arizona—be imbued in me. I prayed that my life not be boring or predictable. In that sense, I’m glad to report that all my prayers came true.”

It’s also the moment that Colter emerges on the scene as a songwriter and experiences a kind of loneliness that has an impact on her writing. After telling her that he thinks she can succeed as a writer and a singer, Eddy introduces Colter to Chet Atkins, who tells her to “keep writing and sending stuff,” since he thinks he can place her songs with country artists and pop artists, too. Atkins also tells her not to “worry about category; just write what you feel.” Soon enough, Atkins has signed Dottie West to sing Colter’s “No Sign of the Living,” Hank Locklin to cut her song “I’m Blue,” and Nancy Sinatra to record “If He’d Love Me.”

As her songs begin to make their way onto records, her marriage to Eddy settles into a kind of tuneless groove. A ceaseless questioner, Colter starts to ask herself about her songwriting and her marriage. She admits that her “solace was at the piano at which, for hours on end, I’d play, sing, and compose … the good [songs] were the deep ones, the ones that emanated from the depths of my secret heart. … The biggest secret was my dissatisfaction with a marriage that never grew into anything more than a meaningful friendship.”

Six months after she and Eddy part ways, she meets Waylon Jennings. “I sensed something in this man that I couldn’t ignore. I saw him as a fellow adventurer, a man unafraid of uncharted territory, someone willing to go anywhere and do anything in pursuit of some ever-elusive truth.” Her relationship was nothing if not turbulent and steady by turns, but at its center existed a steady and intuitive trust, a sort of metaphysical “can’t-live-with-you-can’t-live-without-you.”

In 1970 Colter—who had up until then been going by her given name—recorded her first album, A Country Star is Born, and she changed her name to Jessi Colter. During this time, she’s going through turbulent times in her personal life, and one line echoes through her heart as she seeks healing: “Oh well, there’s always God.” By the mid-1970s, Colter expresses her divided soul in the making of two albums: Jessi and Mirriam. “Jessi was the wife of Waylon and the artist who had recorded two secular albums; Mirriam was the follower of Christ returning to her faith. Because I was both Jessi and Mirriam, I could not give up one for the other. All I could do was allow each one to have her say.”

Colter grapples steadily with her moving away from faith and her at first jagged and then steady return to it. She has just released a new album titled simply Psalms, which consist of her interpreting several of the Psalms that mean the most to her. “This is hardest thing I’ve ever done,” she told me, “because I live off this. I read these every day, and I want to know how to share them. What I love most about David [David of Bethlehem, the widely accepted author of the Psalms] is that he’s so human, but he has such a repentant heart. These are for people that are hungry for serenity, that long for peace.” The album captures musically the journey she travels in her book. Colter’s honest and heart-full memoir gives us glimpses of a life sometimes fraught with uncertainty lived into the fullness of grace and love.

I chatted with Jessi Colter recently about her new memoir.

Why this book now?

Jessi Colter: First of all I want to say that there’s something very supernatural in the way this book happened. I never felt a need to talk about why I took the turns I did in my life. I was partnering with Willie on a tribute to Waylon, and David Ritz was asked to write the script. He and I spent four minutes on the phone, and he said he would like to tell my story but that he wanted me to tell along the lines of my spiritual story. I realized that it would have to follow the lives of my songs in order for me to tell the emotional story of my life. David made this process so much smoother. So many dreams that I’d forgotten I had dreamed have now come true. Part of the process was going through all these photos and choosing some for the book. It was agonizing on the one hand, and very fruitful on the other. Overall, this has been very therapeutic.

This is story of your parents as well as your own story. What were your mother’s most memorable traits?

I didn’t realize it at the time, but she was what you would call today a professional woman. I was part of what she did, so I was always around her, especially at church. She always had an intuition about me, I think. She led by example; she’d always be out helping people, praying for them. As we drove up to the mines she’d be singing. She had a capacity for ministering to the spirit, but she was also down to earth; she was an incredible cook. She was natural and spiritual.

My father would come and go; he was able to do it all. I remember when I was young he had one of the first [Hudson] Terraplanes. He had this pace about him. I remember his hands so well; he worked so much with his hands. I remember his gait; he had this wonderful laid-back pace. He had a very inquiring mind and a very quiet strength.

What about Waylon? What were his most memorable traits?

I was so glad I got to be with Waylon. I understood when he said that music was the other woman. He was so amazing you could never second-guess him. Sometimes it felt like we were boyfriend and girlfriend rather than husband and wife. He was so funny. In Nashville sometimes we’d just drive up and down the road at night; we’d sometimes end up at JJ’s, a famous pinball hangout, and crazy, funny things could happen. In the studio, he started cutting what became platinum albums. There were times when he wouldn’t come home, and I went a little bazooka; but then he’d come home and have this great big news about something. Waylon made life creative. I had to work out my salvation at my own pace, though. It was hard not sharing that with him; he didn’t have the experience of someone in his own life mining the Bible or being spiritual. There’s also something about music that makes you want to keep it to yourself. It was a fascinating story; we walked along with the rhythm, and he could always read when he should do something.

Part of what I would have chosen to do was not to have left my faith. I’d like that never to be on my record. I am grateful that God forgave me a lot.

What will readers be surprised to learn about you from the book?

It’s a different walk. Probably about my mother but also the depth of all those early times. There were many years that my family was not always close, but my upbringing was awesome.

What lessons would you like readers to take from your book?