Is it Jurassic Jazz, or a New Creature with a Very Big Sonic Footprint?

Impressive recordings of them proliferate lately, some winning best-of-the-year polls and wide acclaim. But aren’t big bands a creaking dinosaur of the swing era? Something is afoot, a reborn beast with a huge sonic footprint. (Photo:Verona native Ryan Truesdell, who began jazz study at Verona High School, now leads The Gil Evans Project during a recent live recording at The Jazz Standard in New York. Photo by Marc Santos)

The creature may herald a new golden age of the jazz orchestra. Consider: the most expansive jazz form remains historically important and globally influential.

Two of the best last two rock concerts I attended both included a horn section: Greg Allman’s band in Milwaukee, and the 11-piece Tedeschi-Trucks Band in Madison, a jazzy blues-rock group that many critics, including myself, consider the best band in popular music today. Lyle Lovett’s Large Band (essentially a Texas-swing jazz orchestra) has revitalized that country singer-songwriter’s career.

Then pop superstar Lady Gaga recorded with timeless Tony Bennett — their acclaimed, hit album Cheek to Cheek impressed even picky jazz critics with repertoire from the first golden age of big bands. They recorded and are touring with a full jazz orchestra, with two dates at Ravinia Festival in Highland Park this Friday and Saturday June 26-27.

In Milwaukee, The All-Star Superband has played weekly almost steadily throughout the 21st century, performing a challenging and diverse repertoire. They will play a benefit concert at 5 p.m. Wednesday, June 24 at the Briggs & Stratton Big Backyard at the Zoo Terrace for Easter Seal of Southeastern Wisconsin, preceding the charity’s annual Walk With Me fund-raiser at the Milwaukee County Zoo. Here’s the big band’s website: http://www.allstarsuperband.com/home.html

Led by bassist Gary Christensen, the orchestra highlights renowned saxophonist-flutist Warren Weigratz, widely-traveled alto saxist-clarinetist Tim Bell, trumpeter Kaye Berigan (whose uncle Bunny starred in the first golden age) and other top-flight area pros who relish the band’s power and palette. The Superband’s cover charge every week goes to charitable benefits. This is high-calorie music played for the love of it, and shouldn’t be missed.

To the west, The Madison Jazz Orchestra, formed in 1986, performs monthly and with comparable ambitious quality to Milwaukee’s big band. A “battle of the bands” between these Milwaukee and Madison orchestras would be epic.

Also, The Large Unit, an avant-garde nonet of European musicians will perform at 8 p.m. Wednesday, June 24  in Milwaukee at Sugar Maple, 441 E. Lincoln Ave., as part of the annual Okka Fest.

A critical measure of the golden age of any medium is the level and range of artistry at work among a wide array of serious practitioners, without obvious commercial hooks. Still, I’m defining jazz orchestra broadly (see discography) to include rock- or blues-oriented groups with at least three horn players who improvise, to show the large form’s ongoing influence.

Two auspicious and related examples of full jazz orchestras with brand-new recordings are The Thompson Fields by the Maria Schneider Orchestra and Lines of Color by The Gil Evans Project, formed and led by Verona WI native Ryan Truesdell. Truesdell also produced Sky Blue, Schneider’s previous double-Grammy-nominated orchestra album, and the orchestras share a handful of musicians. Last year’s most conceptually ambitious, if not best, jazz recording was Identities are Changeable by Miguel Zenon and his “Identities” Big Band.

But the Evans influence seems ascendant, in Schneider, Truesdell and the brilliant Canadian composer-orchestra leader Christine Jensen, among others. The primary influence of Schneider, the premiere orchestra leader in jazz today, is Evans, the impressionistic sorcerer who conjured palpably evocative backdrops for Miles Davis’ classic albums, Miles Ahead, Porgy and Bess, and Sketches of Spain. Schneider served as Evans’ musical assistant for three years before his 1988 death. 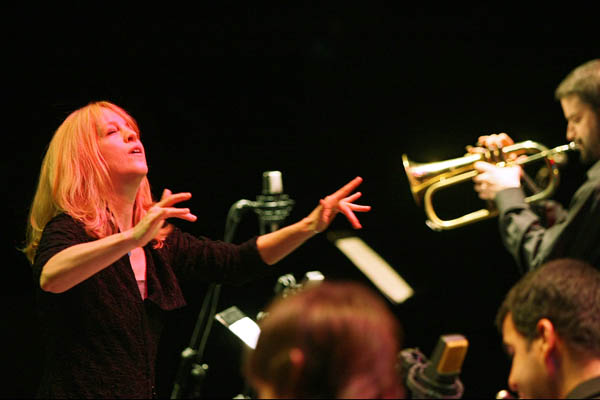 Here The Gil Evans Project, live at the Jazz Standard, records a portion of Evans’ “The Time of the Barracudas”:

Numerous recent orchestra recordings defy the worst economic catastrophe since the Great Depression, and jazz’s small presence in corporate-controlled, bottom-line radio and music industries. Try maintaining a 16-to-18 musician ensemble that requires extensive rehearsal, a collective response to one leader’s creative whim and will, in an art dominated by the “rugged-individual” instrumentalist.

“Shocking” is what Truesdell calls all the recording and activity (see below and discography). “But people are getting grant money and finding ways,” he said in a phone interview. “And it is so much cheaper to make a recording now. You can you record them on your own. Or they do live recordings which are so much easier to do. There is a cost-effective ways of making a big-band work.

“I don’t know if it’s a new golden age, but people are trying to do something different. Everybody’s got a quartet or trio, so people are searching for something kind of different and some musicians think their voice will be different if they go larger.”

Nevertheless, today most jazz orchestras use the pure acoustic power, color and range inherent to a sonic palette that Gil Evans expanded by employing all the wind instruments of a classical music orchestra, in ingenious voicings and settings.

“I think it’s a combination of people for whom the jazz orchestra is their voice, and of leaders in small ensembles finding their voices in larger ensembles,” Truesdell says. “And how they’re doing it, I guess they don’t pay people very much, just like everybody else,” he laughs. He adds that all the recording groups aren’t touring nearly as much as big bands did in the swing era.

However both his and Schneider’s orchestra owe much of their financial viability to the highly sophisticated artists-run ArtistShare label, which draws on individual “crowd-funding” sponsors, facilitated by the networking the Internet has provided DIY efforts. Formed in 2003, ArtistShare has produced nine Grammy awards and 18 Grammy nominations with a roster including Pulitzer-prize and Oscar-nominated writers, Guggenheim fellowship recipients and NEA Jazz Masters. 1

Composer-arrangers like Quincy Jones — best known for work with Michael Jackson and Miles Davis — and Vince Mendoza freelance with numerous jazz and symphony orchestras. Mendoza’s widest exposure came with his sumptuously simpatico enhancements of Joni Mitchell on her double Grammy-winning “standards” album Both Sides Now, including a Grammy for Best Instrumental Arrangement Accompanying a Vocalist.

Perhaps the seeds for a new golden age of orchestra were sown in 1997 when Marsalis and his orchestra bested all “legit” composers for the Pulitzer for Best Musical Composition, for the soulfully solemn orchestral oratorio Blood on the Fields. It has spurred other ambitious jazz orchestral inquiries into African-America history.

And speaking of universities, the persistence of the jazz orchestra goes back to education. Despite the ever-present lure of small-combo guitar rock-pop, countless young musicians dedicate themselves to orchestra instruments and to rigorous, competitive high school and college ensemble programs, as a cursory survey of Down Beat magazine’s large annual education section proves.

The highly accomplished and dynamic All-Star Superband has played weekly for most of the 21 century throughout Milwaukee. All their performances proceeds go to local charities. Courtesy All-Star superband.

“There are 2,318 rehearsal big bands on the planet,” asserts Gary Christensen, leader of the All-Star Big Band. “On YouTube I came across a young people’s big band in Japan really nailing this high-level jazz piece. So it’s like, wow, they really are everywhere!”

A gifted composer-arranger like Schneider, Marsalis, Argue or Jensen — or the SFJazz Collective’s multiple composer-arrangers, including the brilliant Miguel Zenon — can make musical magic with such forces. And magic, that transports the imagination and spirit, never goes out of style.

See sidebar post on CC for a Selected Discography of the Modern Jazz Orchestra: http://kevernacular.com/?p=6335

This article was originally published in OnMilwaukee.com:http://onmilwaukee.com/music/articles/jazzgoldenage.html

This article is dedicated to the memory of my father, Norman Lynch, who introduced me at a young age to the power and possibility of the jazz orchestra. He especially loved Stan Kenton and often said, “My dream always was to play trombone in the Kenton Orchestra.”

Norm and Kevin Lynch, beside a Stan Kenton poster, The Jazz Estate, Milwaukee, 1983. 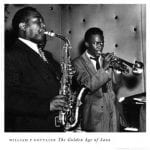 Why Should We Care about Miles Davis? Thoughts about the Man and More 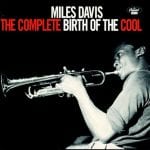 A Discography: Exploring the Jazz Orchestra’s Wilds and Wonders