The Reverend John Wilkins visited Off Broadway in St. Louis last Wednesday (July 13th).  Despite a horribly mismatched opening act (a guitar-and-drums duo in their early twenties, obviously living out their White Stripes fantasies), it was a magical night.  The lion’s share of the audience was clearly there to see their friends in said opening band.  But Rev. Wilkins made believers out of all of them.

Wilkins is the pastor of the Hunter’s Chapel Church in Como, Mississippi.  Like his father, the Reverend Robert Wilkins, he answered the call to the ministry and gospel music following an early career as a blues guitarist/vocalist.

RYAN MIFFLIN/DIRTY ROOTS RADIO: John, thanks for taking some time.

Fill us in a little on your background.

Well, I’m from Memphis, Tennessee – where all the great musicians is from. My daddy was born in Hernando (Mississippi) and raised all of us up in Memphis. As time’s gone on, I’ve played in gospel groups. This thing here picked up in ’05. I pastor a church in Como, Mississippi, and the guy that was buried there…Othar Lee Turner, I did his eulogy. This is where this thing started. Guys came from everywhere and they wanted to know who I was and I told them and that’s where this started. They went and got cameras and guitars and stuff and there it was, you know.

Tell me a little about your dad. A lot of people know about him, even if they aren’t aware of it.

Reverent Robert Wilkins was born in Hernando and as far as I can remember back I remember him playing the blues and stuff like that. He turned over into gospel music, and I got a chance to play with him in 1968. My baby brother played tambourine.  Daddy’s got a big, long story. The Rolling Stones recorded some of his stuff.

I got a chance to play with him in churches when I was a kid. I started around 13 years old playing in gospel groups and as I grew up then I wanted to play a little blues like he did. I started playing down in the Hill Country tonks and juke houses. I remember my mother came to me – she was real religious – she says, “Son, you can’t play both of ‘em, you gotta do one or the other,” you know. Daddy never said anything because he knowed that’s the way he was, you know. So I made up my mind and said, “Well, I guess she’s right”. I got sick one night down there playin’ the blues and I thought about that and thought, “Maybe she’s right.”

So I stuck with the gospel and I got a chance to record “You’re Gonna Make Me Cry” with O.V. Wright and played for a lot of groups that played through the city. The last group I was with, I stayed with them about twenty years; the M & N Gospel Singers. We did a couple of recordings, “You’ll Make It Somehow” and “Amazing Grace” and I was there until I got called into the ministry. And that’s how I got to Hunter’s Chapel Church through preachin’.

I think your mom’s philosophy is a pretty common perception; the blues has the Saturday Night reputation while the gospel is for Sunday Morning. Do you consider yourself blues, or gospel, or both. Or, is there even a difference?

Well, I think what I does now is “gospel blues”. Some of my songs have a soul feeling and some of the music has a blues sound. But it’s all gospel lyrics. We call it “gospel blues” and I’m trying to do something different from what everybody else is doing; I’m trying to do something that will satisfy everybody. A little for the old, a little for the young, and a little for the medium age. So far, on this tour, everybody’s really been pleased and they come to me saying how much they enjoy it. It makes me feel good when I know people enjoy what I’m doin’. 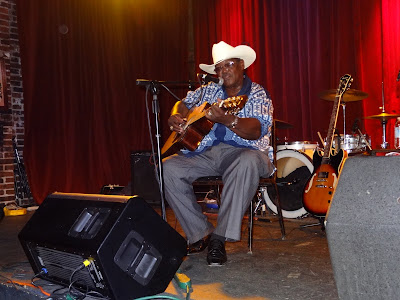 You definitely have that Hill Country sound and got the gospel. Some of it’s very traditional, but it’s still unique and different. Tell us about your influences and what you put all together to do your thang.

Well, it just came to me. I’ve got some songs that I do that are in the O.V. Wright style. And then I’ve got some of my daddy’s stuff. I got some of my own stuff. I just mixed it all together. I’m the type of guy sometimes I’m at church and somethin’ new come to me while I’m up in the pulpit. I’ll look at the musicians and say “Gimme this here” and they go with that. Same thing with these musicians here. I’m almost like a creator. I hear things and different sounds and I just sit there and put it together, you know.

The blues itself is a big, long tradition and the Mississippi Hill Country blues is its own segment of that. I know Mississippi Fred McDowell went to the church you pastor and you delivered Othar Turner’s eulogy. What does it mean to you to be a part of that chain that guys like Junior Kimbrough and R.L. Burnside came through, and to be able to do it your own way?

Yeah, you know, I played with all them guys down at the Hill Country Picnic. Last time we was down there this year, everybody played together. Daddy always told me, “Son, play your own style. Do your own thang.” I know a lot of Hill Country guys play the blues, but they use the same key all the time just about. They do that foot stompin, you know…boom-boom-boom-boom. Well, I try to change mine up a little bit and give folks a groove, you understand.

Let me ask you a little about the faith side of things. I know a lot of people who would say, ”Oh, he shouldn’t go into a bar and play gospel music,” but I don’t like to divide things up that way. What’s your thought on that?

When I put this record out, I had some of my preacher friends say, “What are you doing?” I said, “Man, check the album out. It don’t say nothin’ about the blues. It says, ‘You Can’t Hurry God’. And what you think about that?“ [laughs]

I had to get my church together and let them know, this ain’t about the blues. I told them that Jesus said the common peoples heard him gladly. What’s wrong with a lot of us now is we’re too sophisticated, you understand me? I say, if you’re truly saved, you ought to be able to go where you want to go. If I was an alcoholic and the lord freed me from alcohol, why can’t I go in the liquor store and cash my check…if the lord done freed me? Now if you got some doubts, you understand, you ain’t quite got it together.

When Zacheus came to see Jesus, he got up in the top of a tree. A tax collector. And Jesus saw him and said, “Hey boy, come on down. I’m going home with you.” But, the folks stood around. The crowd mumblin’. Because “He’s goin’ home with a sinner!” I mean, where’s he supposed to go? He said he came to save those who were lost. Isn’t that right?

I believe people have got saved out of my music. I’ve had people come to me with tears in their eyes, their spirits lifted. They say, “Man, I’m going back to church. Haven’t been in thirty years, twenty years. I’m going somewhere to church.” And some of them have come to my church. We had a guy from Europe in my church. He was taking pictures He said, “Man, I haven’t been to my church in I don’t know when. But I enjoyed myself here today. Because you all is really down to earth.” You understand me?

So, I got my church like that. I got my church to accept peoples regardless of what they have on. It’s not about what you got on; it’s what in your heart. I believe you treat people like you want to be treated, everything’ll be alright. 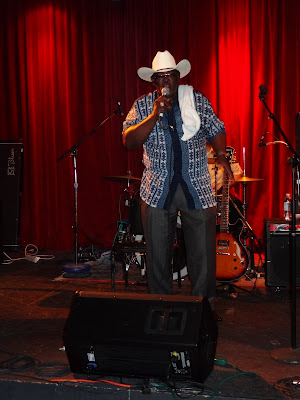 I can’t listen to modern contemporary Christian music. It just doesn’t do it for me. But I can put on what you’re doing, or some Blind Boys of Alabama and I can FEEL that.

The blues. I mean, like I said, it ain’t goin’ nowhere. The blues ain’t nothin’ but a feeling. It’s how a person feels. When Elijah was running from Jezabel, Jezabel was trying to kill him. He was runnin’ and hidin’ and runnin’. Then he sat up under the juniper tree and asked the lord to take his life. You know, now, if you want the lord to, why didn’t you stay and let Jezabel catch you? He just had the blues, you know. He just had the blues.

What’s next for you? Are you going to keep doing this?

Well, I’m blessed by what you do, I enjoy sharing it, and I’m glad you’re doing it.

Alright. Thank you very much. I hope you enjoy the show tonight. I’m just waitin’ and dependin’ on the lord. Whatever the lord says, that’s what I’m gonna do. 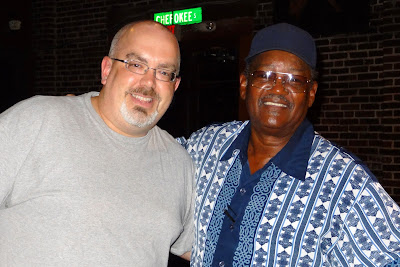