I started doing these Inside the Songs articles based on a hunch: if a great songwriter could write a great song, couldn’t they also write a great story about it? After all, whatever inspired them to go out of their way to put a story to music must have been pretty interesting. Now with fifteen features under our belt, the hunch has proved absolutely true. So it’s a pleasure to bring along our sixteenth Inside the Songs feature with Maine folk/roots songwriter Putnam Smith.

Many folks these days are attuned to creating music the “old-fashioned” way and melding this old music with a lifestyle that harkens back to pre-digital times. Putnam takes this a little farther than most; his new album, Kitchen, Love…, was printed via pedal-powered letterpress, and features is ongoing obsession with antique cast iron cookware. The music itself draws elements from the roots of American music, featuring some beautiful clawhammer banjo playing, but is also informed by today’s modern songwriters. Putnam’s music isn’t anachronistic or archaic, it’s just as heavily informed by a sense of reverence for our shared past and a deep abiding love for the future pathways of American music.

I caught up with him to see if he could tell me more about a few favorite songs from the new album. Here they are in his words:

Inside the Songs with Putnam Smith

Putnam Smith – The Artist Up on the Hill 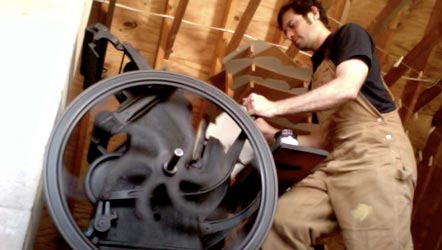 “I’d been bartering with this friend of mine: work on my website in exchange for banjo lessons. My friend’s the quiet type, not all that forthcoming with stuff from his past — that is, until one night, after one of these banjo lessons, and a couple of beers. Suddenly, out came all these amazing stories from his past that I’d never heard before. Stories from the early 1970s (when I was still in diapers!), the post-woodstock era, adventuring around the country with his former wife. Setting up a tent in downtown San Francisco; driving flat out in a ’68 Coronet convertible; making love out in the desert of New Mexico. Well…you have to be careful what you share with a songwriter: a couple nights later, out came this song.”

“Perhaps as a reaction from spending too much time on the road, leading an overly social existence, I came home from tour, and felt an overwhelming need for solitude. I live in a log cabin half an hour North of Portland, Maine — but even this didn’t seem to be enough. I found myself reading books about Dick Proenneke (who lived alone in a remote hand-built cabin in Alaska for 30 years), the journals of Thoreau, and the poems of Emily Dickinson. The “Belle of Amherst,” though, was the one that ended up catching my fancy, mandolin in hand. She wrote over 1,800 poems, yet only a handful were published in her lifetime (and anonymously, at that). She dressed almost exclusively in white, baked bread, worked in the garden, and wrote poems which she buried away in a trunk. What can I say? I have a mad crush on a long-dead poet from the 19th Century.”

“I think of this song as a political song disguised as a racy love song disguised as a song about a cast iron pan. I love to cook, and it was something of a revelation when someone introduced me to cast iron cookery: non-stick pans whose surface not only doesn’t flake off in due course of planned obsolescence, but gets better with age? Radical! I happen to love generations-worn things that still work (I also print my CD Jackets on a 1901 pedal-powered letterpress — cast iron, no less!). So now, I sometimes feel like a proselytizer. What I didn’t realize until I started playing this song out, is that cast iron cookery does indeed have something of a cult following. Don’t believe me? Check out the music video we made, including a flash-mob cast iron pan street dance:

Musically, the banjo riff is somewhat derived from the old time fiddle tune, “Raleigh and Spencer,” which I learned off an old Tommy Jarrell record. For me though, it’s the trumpet and trombone that make the song…”

my second no depression blog: the road, thoreau, americana