In the Hills at FreshGrass with Ramblin Jug Stompers 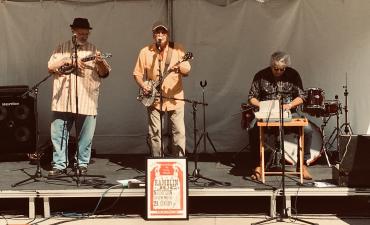 Accompanying me to FreshGrass this year was John Szwed’s biography of Alan Lomax. What better to read on the way to a roots festival than learning more about the man whose work brought so many of these roots to the surface? Many artists at FreshGrass are direct descendants of that line but not all appeared on the main stages. One of the highlights of FreshGrass was discovering Ramblin Jug Stompers on the Freshroots stage. Their name alone provokes curiosity, deepened by their board advertising “78rpm music for the twentieth century”. For the best part of an hour this curiously named trio played a selection of tunes that stretch back to the 1920s. After that set and a brief chat with them they could have stepped right out of Szwed’s book.

Ramblin Jug Stompers are Bowtie (offstage, Paul Jossman), Mister (Michael) Eck and Wild Bill. There is a fourth Stomper, Cousin Clyde, who sadly wasn’t there this time. Between them they have been playing for 150 years, though as the Stompers have been going for only a mere 12 years. They play everything from the mandatory FreshGrass five-string banjo, guitar, mandolin, and ukelele to washboard, kazoo, and jaw harp. These guys could have hopped off the boxcar that morning from a lot further than their Albany, NY, home.

During their set Ramblin Jug Stompers weaved an entrancing path through blues, ragtime, bluegrass, and folk. Most of the songs can be found on their album Hobo Nickel, but live or recorded, the Stompers are exceptionally sure footed. Their version of ‘Mornin Blues’ has such a light touch, Bowtie’s gentle banjo picking and vocals wring every last bit of those blues yet keep the song moving. Mister Eck adds just enough kazoo to give the song originality without turning it into a novelty. Many have covered ‘Down In the Boondocks’, I love Ry Cooder’s, but again the Stompers give the song a fresh, authentic sound just as Joe South might have envisioned.

Ramblin Jug Stompers apply their touch particularly deftly to the Delta blues of Jim Jackson’s ‘Wild About My Lovin’, originally recorded in 1929. Wind forward nearly 30 years to Grandpa Jones and ‘Fix Me A Pallet’ to hear the strings of Mister Eck’s mandolin duelling with Bowtie’s banjo as they harmonise, “fix me a pallet down on your floor/fix me a pallet close by the door”. The sun shone, the crowds gathered and day three of FreshGrass was well underway.

Between songs the Stompers amuse the crowd with wry self deprecation. ‘My Eggs Don’t Taste the Same Without You’ needs no further explanation. The title says it all, just crack in the ragtime line for a perfectly done performance. ‘Frypan Jack Enters Into Heaven’ is a true story (I think) but fact or fiction, it embodies the jug band ethos; entertainment.

While on entertainment, few could recognise what Wild Bill played instead of his washboard or harmonica on a couple of tunes. A typewriter! Even for its intended purpose this contraption is rarely seen these days but even rarer is a typewriter used as a musical instrument.

Again, the Stompers amuse without turning themselves into a comedy act. Far from it. These are skilled musicians as they demonstrate on Jean Ritchie’s bluegrass classic, ‘Blue Diamond Mines’. The Stompers bring the song to its home further south down the Appalachians with those harmonies once again, a mournful harmonica as the strings of banjo and mandolin course around those peaks.

As no doubt for many, I have Jorma Kaukonen to thank for my first exposure to ’San Francisco Bay Blues’. The Stompers take it back to its Jesse Fuller beginnings. They have to be some of the most cheerful blues going. To confirm Ramblin Jug Stompers as boxcar troubadours par excellence there can be no finer example than ‘Freight Train Boogie’.

Bowtie commented that he was inspired by Pete Seeger to play the five string banjo. That came as no surprise. Ramblin Jug Stompers are as true to the roots of their many and varied sources whether it’s ragtime, blues, country or folk. As well as an excellent performance at FreshGrass, they were an ideal soundtrack to reading about Lomax too.