In Celebration of Jerry Garcia and The Days Between

Jerry Garcia was born on August 1, 1942, and died on August 9, 1995. In what has become an almost institutionalized acknowledgement and commemoration of his life and musical accomplishments, the first nine days of August have become known as The Days Between, with worldwide celebrations, concerts, radio tributes, film screenings, informal gathering of fans, curated playlists on the streaming sites, and shared memories of the people he touched. This is mine.

Very late on a cold night in October 1973 our car was parked with the engine running and the heater blasting. We were on a desolate service road that led to the freight and cargo terminal of the Philadelphia International Airport waiting for a shipment to be delivered from California. At the time my wife and I were 21 and had been married for almost two years, and we both worked together at a local independent record distributor. We had eagerly volunteered to assist our newest client, Grateful Dead Records, who were just days away from the release of the band’s new album, Wake of the Flood.

With artist Rick Griffin creating an exquisite cover design, it was decided that they would print up posters of the album with the word “Here” on the top and “Now” on the bottom and have them stuffed into each box of 25 at the Columbia Records pressing plant in New Jersey. When record stores received their orders they could hang the posters in the window. Seemed to be a better marketing concept than the original idea of selling the album directly to fans from ice cream trucks.

Jerry and his first wife a week after their wedding.

It was after midnight when we pulled up to the loading dock and stuffed a dozen or so boxes into the trunk and backseat of our old sky blue English Ford Cortina. Throughout the evening as we were waiting, we alternated between listening to eight tracks and the radio while inhaling pretty much everything we had rolled and brought along, and the rides across the bridge to the plant in Pittman and then back home to Philly remain a bit hazy. But the mission was accomplished and Garcia and Weir stopped by our office in the afternoon of August 4, 1974. I was out that day attending a class at Temple University, but Jerry signed a copy of his latest solo album for me, wrote “Thanks” on it, added a sketch of a flower pot, and left it for me with my wife. It still hangs on my wall and you can see it at the top of this article, the ink slowly fading over time.

Recorded at the Festival Express, Canada in 1970.

For a fan of the Dead and Garcia in particular, the period between 1970 to 1975 was an amazing and unheralded burst of creative output. In those five years the band released Workingman’s Dead, American Beauty, the self-titled two-disc live album also known as Skull and Roses, the three-disc Europe ’72, Wake of The Flood, From the Mars Hotel, and Blues For Allah. In addition, Garcia both performed live and played pedal steel for the New Riders of the Purple Sage, appearing on their debut album; had a separate band along with Merl Saunders that released two albums; made one with Howard Wales; did two solo albums; and debuted his bluegrass band, Old and In The Way. He also appeared as a guest on 18 albums from artists that included Crosby, Stills, Nash and Young, the many offshoots of Jefferson Airplane, Brewer and Shipley’s “One Toke Over The Line,” Art Garfunkel, It’s a Beautiful Day, David Bromberg, and solo projects from Bob Weir, Phil Lesh, and Keith and Donna Godchaux.

In the first week of August 1974 the Dead were scheduled to perform two nights at the Philadelphia Convention Hall (aka the Civic Center) and those concerts were recorded, preserved, and released as Dick’s Picks Volume 31. In the days leading up to the show the legendary radio promotion man Augie Blume came to town from his home in San Francisco in advance of the band’s arrival, and my wife and I acted as his driver and guide to the city as he set up press and radio interviews for Weir and Garcia, brought fans to his hotel room to share smoke and stories, and generally be the record label’s goodwill ambassador.

On the night of the first show we waited for Augie outside the hotel to take him to the venue and accompany him backstage. He walked out with the group and a few dozen other people who piled into a fleet of rental cars, and as he got into our beat-up old car, Garcia noticed and gave us a quick wave. The experience to witness and immerse ourselves from behind the curtain to not just the music but also the familial dynamics of what can best described as a mystical traveling carnival of intensely creative and intelligent artists and endless cast of characters who drew energy from each other, the audience, and an endless infusion of chemical enhancement was an indelible watermark in my life. And I’m most surprised that I can still remember it. 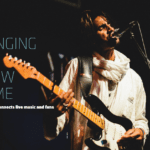 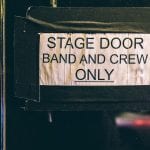