I was afraid of T-Model Ford

I had the good fortune to see the late T-Model Ford live in 2002 and again in 2004.  I saw him at the old Cambridge, MA House of Blues, the very first House of Blues ever which was a very funky “juke joint” and has subsequently closed (thanks, Live Nation!).  Both times I saw him I got the good fortune to meet him.  I shook his hand and both times he hit on the women I had brought with me.  I’m 6’4” and weigh 260 pounds but I was scared shitless of this little crippled man. I think it was the ferocious way he conducted himself – the way he attacked his guitar, scolded his drummer Spam, wailed “It’s Jack Daniel’s time” as he sucked back whiskey and how he stared at me. I also think it was because I listened to his first album, the 1997 masterpiece Pee Wee Get My Gun, hundreds of times.

Pee Wee Get My Gun is one of the most authentic blues statements of the past 20 years.  I still listen to this set of music, in it’s entirety, once every 6 weeks or so.  This first compilation of recordings from T-Model is filled with licentious menace, braggadocio grandstanding and ominous boogie that constantly threatens to overwhelm the listener and musicians.

I can’t imagine that T-Model conceived of Pee Wee Get My Gun as an album.  I imagine he was just doing his thing, and making sure he got paid, as Mathew Johnson and the Fat Possum crew did their best to capture it.  I also imagine that T-Model had nothing to do with the cover photo of a small child pointing his fingers at the camera, head-on, in the shape of a gun.  I do give Fat Possum a lot of credit though for packaging up this music in a gripping way that resonated with me.  Lightning struck with these recordings and this album that didn’t happen as consistently with the rest of T-Model’s catalog.

It just doesn’t get any better than “Can’t Be Touched.”  It is nearly impossible to understand what T-Model is singing.  The extreme lo-fi of the track, unlike the more “produced” other tracks, was recorded in T-Model’s house and it is an assault to the senses that defies the listener to not move and groove.  The off timing of T-Model’s superb playing requires a drummer to be rock solid and not too worried about conversional music theory.  That is Spam in every way.  On “Can’t Be Touched” the tape is so distorted that Spam’s drumming is ramped up into some kind of metallic junkyard stomp.  This is a primitive rhythm exercise that should make Maureen Tucker green with envy.

“Nobody Get’s Me Down” is a hill country meditation in which T-Model tells his violent history of assaults.  T-Model is a brilliant interpreter of the Chicago blues tradition, mutating songs like “44” and “My Babe;” however, it is when he uses a convention such as this Latin blues riff, similar to Otis Rush’s “All Your Love,” to describe being shot, stabbed and beaten, that the primitive poetry of the rural South is conjured up into a relentless humid funk swirling around your body.  This is strong inspiration material.  Check out the Neckbones’, a short-lived white-boy Fat Possum band, version of this song.  Although inferior to T-Model, it shows the deep river of emotion that can be culled from such a simple expression.

I can’t get enough of “I’m Insane.”  This chauvinistic menacing rant about his 2 closest “loved ones,” his wife Stella and his drummer Spam, is what made me afraid of this tiny crippled man when I saw him in 2002.  “Stella, if I catch you fuckin’ up, I’m gonna beat your ass…Spam I’ll beat the shit out of you too.”  Holy shit, it doesn’t get any more matter of fact.  This is a man who knew nothing but violence and intolerance and subjected everyone around him to it.

This album evokes a certain modern rural life in an amplified way.  With eclectic guitar wailing and modern post war-blues riffing (how about the supped up instrumental riff on “Sweet Home Chicago” that is “T-Model Theme Song?”) this album is not some kind of traditionalist statement.  It is also not an old man living in the past.  This is a dangerous artist making a profound statement about violence, sex and hardship.  With a singular vision of life, that is surely not the reality for all northern Mississippi residents as is evident from other Fat Possum releases, this is the artistic outpouring of a deeply wounded man who lived on the razor edge of morality.  And as such it is deeply affecting.

I’m a bluesman, guitarist and general smart-ass.  I love playing music live in front of people more than almost anything else in the world (just short of my wife and family).  Listening to, thinking about, talking and writing about music helps my live performance and that is why I write this blog.  I have the music mentioned above in a Spotify playlist entitled “Bucky’s Blog” if you want to check it out. 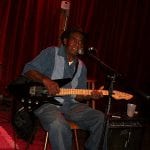