Hayes Carll is only on the cusp of a promising career, but he’s already left a noticeable impression on friends and admirers in high places. And they’re never short on praise for the young songwriter.

“I really respect him,” says Ray Wylie Hubbard. “Hayes takes chances with his writing, and he has the ability to really reach out over the edge and make it work.” Wrecks Bell agrees. “Hayes is almost too cool,” says the owner of Galveston’s Old Quarter Acoustic Cafe and former running buddy of Townes Van Zandt. “With his smooth approach and wry humor, he reminds me of Townes.”

Seems things have taken a turn for the better since Carll, 29, wrote “Where have all my good friends gone?” in the song “Good Friends”, a reflective shuffle on Little Rock, his sophomore effort released March 1. These days, friends are everywhere. He met most while walking along society’s fringes. Carll honed his writing chops living in a shack on the desolate Bolivar Peninsula across the bay from Galveston. Fittingly, his songs often are inhabited by loners and scamps wreaking havoc and breaking hearts.

Carll recently proved himself an unconventional thinker by doing what many would think to be career suicide for an up-and-coming musician: He turned down a five-album deal with Sugar Hill Records. Instead, he created his own label, Highway 87 Music, to self-release Little Rock. “I was very excited about getting on board with [Sugar Hill],” he admits, “but when it came down to it, they wanted more records than I was able to give.”

He may play his cards close when it comes to record deals, but you couldn’t accuse Carll of holding back onstage. Case in point: As most eyes in Texas were fixed on the Austin City Limits Music Festival last September, Carll spent that Saturday an hour south at Gruene Hall. He began a marathon four-hour show by unassumingly stepping to the mike and declaring, “Ladies and gentlemen, please welcome Hayes Carll and his large band.” He was accompanied only by acoustic guitarist Lance Smith.

About 20 minutes into the show, Carll finished off the magnificent story-song “Easy Come Easy Go” from his 2002 debut Flowers And Liquor and addressed the crowd. “I put out a record two and a half years ago, and people have asked me why it’s taken me so long to put out another. Well, I had to come to terms with [the first album] being such an overwhelming success,” he deadpanned, to all of about 30 folks in attendance. “But now I finally feel at peace with the fame, so I can put out a second one.”

The droll wit that pervades Carll’s stage banter stands out in songs on Flowers And Liquor such as “Naked Checkers”, “Lost And Lonely” and the title track. Little Rock has plenty of tongue-in-cheek gems, too; among them are “Wish I Hadn’t Stayed So Long” and “Chickens”, the latter co-written with Hubbard.

Many of his songwriter friends say Carll’s intelligent humor and distinctive writing style are what draw them toward his music. “From the moment I heard Hayes I was engaged,” Jack Ingram says. “His delivery is comfortable yet immediate, amusing but not silly, self-deprecating while confident. Hayes’ voice, delivery and vision are unique.”

Little Rock highlights that singular approach, and it marks a Neil Armstrong-sized leap forward from Flowers And Liquor. The new record was produced by R.S. Field (known for his work with Billy Joe Shaver, Allison Moorer and others), and Carll brought called upon the consummate Texas songwriter, Guy Clark, to help with one of the album’s best tracks. Carll and Clark co-wrote “Rivertown”, a smoggy tale of rambling and redemption. Clark says Carll met the challenge with aplomb: “He’s very bright, and I thought he was doing good stuff. And he’s fun to be around.”

That fun side shows most openly on the endlessly catchy celebration “Hey Baby Where You Been”. But the complexity of Little Rock is most apparent on the standout track “Take Me Away”. Carll crafts the song’s narrative so tightly that nearly every word turns its plot toward new depths of solitude and longing, aided in no small part by Moorer’s beautifully desperate backing vocals and Field’s striking production.

“I’ll always consider myself a lyricist first and foremost,” Carll says. “But I’ve been paying more attention to production, and I tried to bring in more of a groove [on Little Rock]. To bring in some electric guitars and just go for it on a couple songs was a real kick. The first album was very singer-songwriter, so I think the new one is far more accessible to your everyday music fan.” 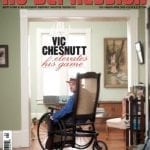