With her new album, ‘Ukulele Dance, young Hawaiian ukulele prodigy Taimane takes her instrument far beyond the Hawaiian shores on which she grew up. As she says, “I don’t look at the ukulele as a Hawaiian instrument. I look at it as an instrument just like the guitar or the piano, and I put it in my hands and then I just play music that I enjoy.” Simple words, but with over a century in the American mainstream, the ukulele has indeed moved far beyond its origins first as a Portuguese sailor’s instrument, and then as the highly animated “dancing flea” (that’s what the word means!) in the hands of Hawaiian artists. On her album, Taimane goes out of her way to show the versatility of an instrument that’s often seen as simplistic or limited. “When I first tell people that I play the ukulele,” she says, “usually their reaction is, ‘Oh, that’s cute! That’s nice!’ But what I’m trying to show people is that the ukulele’s not just a Hawaiian instrument; you can play any type of genre. And that’s why I pick all of these really eclectic, different genres of music.”

On her new album, Taimane covers music like “Stairway to Heaven,” “Phantom of the Opera,” even the James Bond theme, and if that sounds a little strange, it’s all tied together by her sure hand on the ukulele and her strong sense of composition. “Stairway to Heaven,” for example, which has been covered by SO many artists over the years, here sounds entirely new and refreshing in Taimane’s hands. The pure sounds of the ukulele ring out and she draws new directions with the melody, bringing a very old and tired song into an exciting new place. She shows some of this artistic taste in her original compositions as well, like “Moon” (part of a suite of compositions inspired by the solar system), the irresistibly fun “Ragdoll Riches,” and the atmospheric “Neptune’s Storm.”

Just 23 years old, it’s remarkable the kind of skill that Taimane shows on her album. Of course, it helps that she’s been playing since she was 5 and was brought into Don Ho’s ohana (family) at 13 after a member of his band discovered her busking on the streets of Honolulu. Since her discovery, she’s been incredibly busy, playing for celebrities like John Travolta and George Clooney, and performing around the world. With so many high level performances and polished recordings under her belt already, it’s great to know that she’s developed her art beyond the “gimmick” level of a solo ukulele star covering pop songs. With Ukulele Dance, Taimane shows that there’s a real depth to her music, and though her instrument may not always command the respect it deserves, she’s clearly on a path to change this through her music.

Learn More About Taimane via this Hawaiian Airlines Interview: 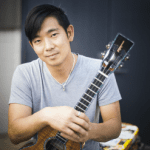