If you don’t already know about the Hard Working Americans, they are:  Dave Schools (bass guitar – from Wide Spread Panic), Neal Casal (guitar and vocals – from the Cardinals…-as in Ryan Adams and the Cardinals- and Chris Robinson Brotherhood), Chad Staehly (keys – from Great American Taxi) and Duane Trucks (drums – from Col. Bruce Hampton’s School of Music) and of course, Todd Snider (vocals/guitar – from, you know Todd Snider, himself).

Snider has been quoted in so many reviews and articles recently but I thought I’d highlight my two favorite recent quotes:  This one in a Rolling Stone interview, where he said,

“When I speak of hard working Americans, I’m talking about Tonya Harding, Courtney Love, Mike Tyson, Marilyn Manson, and myself,” Snider says. “I think we work harder than a lot of people, people who wave flags a lot. I wanted to find a name that would poke fun at the people who think that the phrase ‘hard working Americans’ applies to them and only them. It’s what Woody Guthrie said: music should comfort the afflicted and afflict the comfortable.”

And, this one, from Nashville Scene, where he says:

“I would never win a singing contest, but I can sing my heart out, and I think that’s what you’re supposed to do”.

Fortunately, the Hard Working Americans kicked off their tour in Boulder, Colorado so I was able to see their very first show of the tour – I mean I was mostly able to see it – there was a thick hazy cloud of smoke between me and the stage. I’m pretty sure no one left without at least a contact high. I’ve never seen so many happy hippies in one place. And, I’ve lived in Colorado for a long time. Todd Snider didn’t talk nearly as much or tell his hilarious stories as he does in his solo shows.  It was great to see the first show before any YouTube show videos surfaced the album release because almost all of the songs were a surprise to me.

The album starts out with “Blackland Farmer”, an old song that Faron Young recorded on his album, Story Songs For Country Folks, in 1964.  It sets the tone for the whole album with lyrics like ‘…simple man, not much money, not much land….but my heart is warm and my ways ain’t tough, I guess I’m the luckiest man ever born’.  Contrasting themes of poverty and happiness are apparent throughout the album especially on tracks like “Welfare Music” and “Mr. President, Have Pity on the Working Man”.  Songs like “Run a Mile” and “The Mountain Song” are perfect jam band hippie music songs. One of my favorite songs of the show and on the album is “Straight To Hell”. I had actually only heard Matt Nathanson do this song previously and I really liked his version. It encompasses the reoccurring theme…it’s so sad yet catchy and upbeat.    Another one of my favorites on the album is Hayes Carll’s “Stomp and Holler”.  You can watch the Hard Working Americans version here:

Hayes Carll opened for the Hard Working Americans in Boulder and he came back out and sang this song with them at the end.  This was so much fun to watch!  I *think* that might be John Popper on the harmonica in this song on the album.  The album closes with “Wrecking Ball”.  As a side note, this song was a real pain in the ass to try to look up before I found the list (above).   Apparently, there is a scantily clad pop star with a same-titled but different song. If that wasn’t confusing enough, Bruce Springsteen also has a song and album under the same name as does Emmy Lou Harris but her ‘Wrecking Ball’ song is actually a cover of Neil Young’s ‘Wrecking Ball’ song. So, we probably don’t need anyone else to write a song called ‘Wrecking Ball’… just FYI….Anyway, on this album, it’s a softer, sweet song and I like that it’s the last on the album.

At the show in Boulder they also played Snider’s ‘Play A Train Song’ as well as Merle Haggard’s ‘Working Man Blues’ and I was disappointed not to see either of these songs on the album.

In an article published on popmatters.com Arnold Pan, asks Snider, “With this first effort under your belt, are there any plans for more Hard Working Americans material in the future, like a set of originals? And if so, will it be about hard working Americans?”

To which he responds, “I hope we can write some of our own songs and we are going to try to make some stuff up when we are in Chicago and it will be about Hard Working Americans. Yes. Also soft boiled.”

About The Hard Working Americans
By Todd Snider

What are Hard Working Americans?
We’re a band of friends from all across America.
I formed the band because I wanted to be in a band that wanted to be great, whatever that meant. I find our songs and sing.

I love songs and singing. For the past 20 years, I’ve been compiling a bag of what I’d call perfect songs, all of them written by my friends, many of whom get pegged as “singer-songwriter” or “Americana.” For the past 10 years or so, I’ve also been hanging out at festivals with a bunch of new friends, many of whom get pegged as being in the “jam band” scene.

I’ve been standing in between these two worlds, and thinking that the people in each of them were meant for each other. The songwriters in the Americana world were spending as much time on their poems as the jam bands spend on their tones and their solos. Why not put these things together? Why not combine the best songwriters with the best musicians? I thought maybe young people should do this. But, here’s the rub: None of the young people I’d rant at would listen.

So I joined up with Dave Schools of Widespread Panic, Neal Casal of the Chris Robinson Brotherhood, Duane Trucks and Chad Staehly of Great American Taxi, and formed the Hard Working Americans. We aren’t a side project. When we’re together, this is our main thing. We mean to do what we’re doing. The other guys in the band told me I was in charge, so I ordered everyone to do exactly what they wanted. They wanted to play. I wanted to sing my friends’ songs. I would never win a singing contest, but I can sing my heart out, and I think that’s what you’re supposed to do. The best way to sing is lost, and it’s easier to get lost in somebody else’s song. It’s harder to get lost in a house you built than in a house somebody else built. Gillian Welch, Kevin Gordon, Kieran Kane, Tommy Womack, Will Kimbrough, Kevn Kinney, Brian Henneman, Hayes Carll and other friends of mine build beautiful houses, where I’ve been lost and wandering for many years.

Hard-Working Americans? Absolutely, we are. I mean, it says so right there in the band name. And it’s true. Dave, Neal, Duane and Chad put in thousands of hours to eliminate any disconnect between emotion and execution. They play what they feel, the same way my singer-songwriter friends say what they feel. I know we don’t look like poster children for anybody’s political campaign, but we’re all about taking patriotism back for the silly and the absurd, the broken and the bleeding, the subversives and the stoned. Patriotism shouldn’t belong to the rigid structures of the airport security line or the football field. My favorite patriot is Yankee Doodle, and that guy stuck a feather in his cap and called it macaroni. Long, strange trip, indeed.

As Hard Working Americans, we like it when people listen to our words, and when people use our music as a tool to get laid. We crave lyrics and hula hoops. We rock balls, we don’t bust balls. We are on your side and at your service. We want epic songs and virtuoso musicianship to exist in a room together, and we want you in the room. Door’s open. 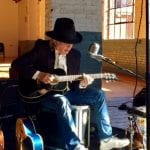 A Day with Eric Sommer: My Kind of Music – Slapping, Sliding, Stabbing 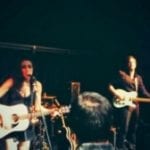