There’s something very exciting about listening to Phish live recordings from 1993 – a crucial year in which the band was transitioning from smaller venues to theaters while also honing the improvisational skills that would define their signature live sound.

In 2008, the band released At The Roxy (Atlanta ’93), an 8-CD set that showcased a three-night run in Atlanta, which includes a transcendent and continuous set from the second show that foreshadowed the musical path the band would head down in the coming years. Now, with the just-released St. Louis ’93, a 6-CD set from the band’s own JEMP Records label, Phish revisits two more shows from that same influential year.

Both shows included on St. Louis ’93 were performed at the same venue – the American Theater – but they were not from consecutive dates or even the same tour.  The first concert was held on April 14 while the second show features the band’s next stop in town, on August 16.

The first of the two shows is an energetic affair, kicking off with a high-octane run of “Buried Alive” > “Poor Heart,” and “Maze.”  The opening fast-paced instrumental, a showcase of guitarist Trey Anastasio’s manual dexterity, segues nicely into the faux-country of “Poor Heart,” while a nearly 10-minute rendition of “Maze” features some great organ soloing by keyboardist Page McConnell.

Another standout moment of the first set is the “Stash” > “Kung” > “Stash” > “Kung” segment.  While it initially appears that this would be a standard “Stash,” albeit a one with some notable soaring guitar solos, those expectations change quickly as the tune breaks down into a fairly rare rendition of the crowd-pleasing “Kung” chant.  The surprises aren’t done as the chant then morphs back into a reprise of “Stash” before making a final return to the full-on chant, now backed by acoustic guitar.  This is the type of rare surprise that elevates a show from merely good to memorable.

Surprise becomes a theme for the evening as the second set starts with an on-stage marriage proposal by Trey’s longtime friend Roger.  Spoiler alert – she said yes.  The band then performs “AC/DC Bag” for the couple, a song that includes a line referencing Roger.

The second set is then dominated by a “You Enjoy Myself” > “Spooky” > “You Enjoy Myself” run and an almost 16-minute “Harpua.”  The former, one of the band’s more intricately designed compositions, again finds the pace characteristic of the first set and includes a very extended vocal jam section following the “Spooky” interlude.  The latter is an entertaining mix of music, narration and cover songs.  This show’s “Harpua” weaves elements of Gary Wright’s “Dream Weaver,” “The End” by The Doors and the theme song from The Jetsons into a narrative about a boy, his dog and their adventures in a mythical dreamland.

The second trio of discs in the St. Louis ’93 box set captures the band’s August return to the American Theater toward the end of its summer tour.  Any concerns about the band being weary from the previous 25 shows on this tour are quickly dismissed as the quartet launches into the riff-driven “Axilla.” As with the first show on this set, this is a great opening song for immediate crowd engagement.  That momentum carries into a 13-minute “Possum,” that once again highlights Trey’s soloing chops.

As good as this start is, it pales in comparison to the monumental “Reba” in this first set.  Once the song’s initial composed sections end around the 7-minute mark, the band immediately moves into a spacy and exploratory extended jam section – the kind usually labelled Type II Jamming by Phish fans.  This section evolves over the course of the next 10+ minutes, completely changing the sonic landscape as it progresses.  This performance is a prime example of the creativity and virtuosity this group can muster when everything is locked in.

Although nothing else reaches the lofty heights of this “Reba,” there are still some notable moments.  “Weekapaug Groove” is notable for its jam that incorporates a “Gypsy Queen” tease and the instrumental “Take The ‘A’ Train” features a tremendous bass solo from Mike Gordon and also marks the band’s penultimate cover of this Duke Ellington classic.

Following that tune, the band powers through Led Zeppelin’s “Good Times Bad Times,” an a cappella and microphone-free version of “Amazing Grace” and an electrified rendition of the bluegrass classic “Rocky Top” to bring that show and this box set to a close.

St. Louis ’93 is another fine collection from the Phish archives.  Fans will find the remastered audio here superior to anything currently available online or circulating among traders and the variety presented across the two shows makes this one worth owning.

JAZZ is PHSH – He Never Spoke A Word

It is evident from the St. Louis box set that covers are an integral component of the Phish live experience, so it is only fitting that there is a new group dedicated to covering the original music of Phish.  Helmed by brothers Adam and Matthew Chase, JAZZ is PHSH features a rotating cast of accomplished players, some of which have performed on stage with Phish, assembled to breathe new life into Phish compositions through an improvisational jazz filter.  The group’s debut He Never Spoke A Word is a diverse set of arrangements that both pays homage to the compositions of Phish while showcasing that talented cast of contributing artists.

Fan favorite melodies are still here, but the arrangements leave plenty of room for exploration.  On “Cars Trucks Buses” from Phish’s highly acclaimed Billy Breathes album, JAZZ is PHSH pays plenty of respect to the original tune before Derrick Johnson takes his trombone for a walk, eventually building to an excellent tenor saxophone feature by Chris Bullock, reinforced by Josh Thomas on organ and Carl Gerhard on Trumpet, before returning to the songs main theme.

On “Weigh,” the group uses the trombone with support from the guitar and other parts of the ensemble to mimic the old-timey feel of Mike Gordon’s vocals on that unique song.  The tune then takes a turn toward the funky as the keyboard and Matthew Chase’s guitar gives the arrangement an almost Prince-like feel before finishing with the initial theme.

Speaking of funk, JAZZ is PHSH takes the already heavy rocker “46 Days” to even funkier heights.  Led by Thomas’s down and dirty keyboards, Anthony Wellington’s bass and great horn work throughout, the group applies the same kind of funk veneer that Phish incorporates when they perform songs like “2001” and their cover of Stevie Wonder’s classic “Boogie On Reggae Woman.”

“Lawn Boy” and “Foam” are two other standout tracks.  The former gives a classic slow jazz feel to Page McConnell’s popular paean to cheesy lounge singers while the later deftly incorporates Jonathan Scales’ steel pan work with some funky base and guitar to give the tune a more tropical feel.

He Never Spoke A Word is definitely not one of these “pickin’ on” type tribute albums where studio musicians just replicate songs note-for-note in a different style to capitalize on the popularity of the band.  Rather, this 12-song set is a celebration of both Phish’s music and the spirit of improvisation shared by Phish and the jazz artists in this ensemble.  With the quality of this recording and a huge catalog from which to draw inspiration, there is no reason to think this is the last we will hear from JAZZ is PHSH. 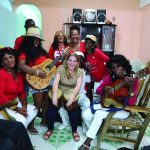 Box Set Brings Joyful Changüí, The ‘Sound of Guantánamo,’ to a Wider Audience