Joni Mitchell – Both Sides Now: Live At The Isle Of Wight Festival 1970 (Blu-ray) 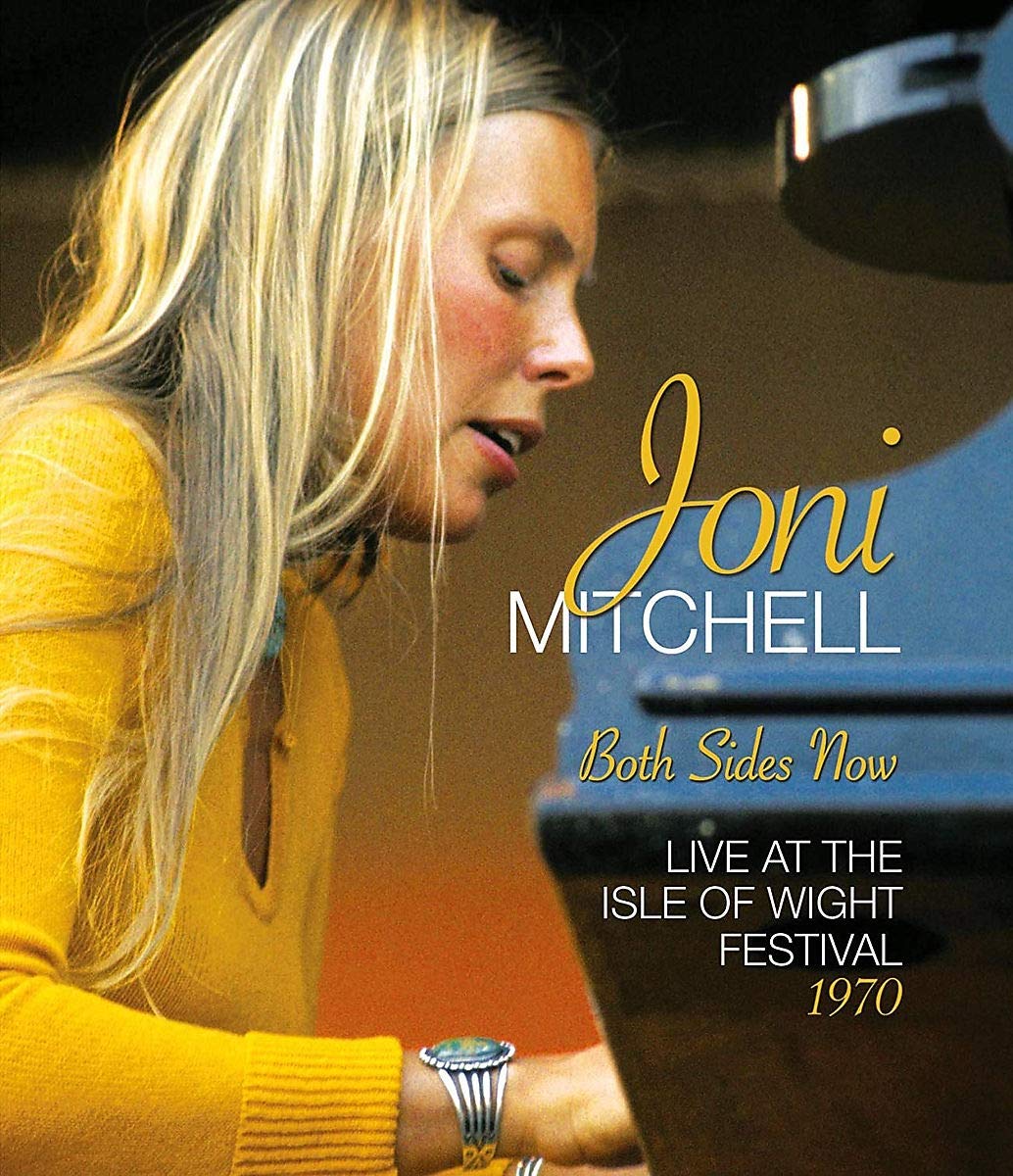 On the penultimate day of the famed 1970 Isle of Wight Festival, during which an estimated crowd of more than 600,000 music fans flocked to the island off the south coast of England, Canadian songstress Joni Mitchell performed a set that is remembered to this day as much for the drama surrounding it as it is for the actual songs played.

Mid-way through Mitchell’s 11-song set, shortly after completing her song “Woodstock,” a concertgoer attempts to make a speech using the artist’s microphone before her managers and security forcefully remove him from the stage. This elicits boos from the massive crowd – a cacophony that doesn’t let up even when Mitchell begins playing piano in an attempt to start her next song. This prompts Mitchell to make an emotional plea to the audience about respecting the performers. Her appeal is heard, order is restored, and the set finishes on a beautiful and positive note.

This entire performance, including the interruption and backstage footage of the offender talking to security and management about his concerns over the fences erected around the festival grounds, was captured by Academy Award-winning documentary filmmaker Murray Lerner, who filmed the five-day festival. Now, the partnership between Eagle Rock Entertainment/Eagle Vision and Universal Music Group has released this film for the first time, a set which also incorporates 2003 interview footage of Mitchell recalling her performance and the overall festival.

Both Sides Now: Live At The Isle Of Wight Festival 1970 looks great on Blu-ray – better than you might expect from a nearly 50-year-old film.  The colors pop, particularly Mitchell’s mustard yellow sweater dress and the many hues found in the frequent cut-away audience shots, and there is an impressive natural film grain visible throughout. The audio is also impressive, especially considering this is a solo performance with only Mitchell’s voice accompanied by piano or guitar standing up against a massive throng at a windy locale.

Although not officially listed as an extra, this Blu-ray includes two options for viewing the film – the full documentary experience, including the 2003 interview, footage from other parts of the festival grounds and the previously mentioned backstage footage, and the concert-only version which just shows what happened on stage during Mitchell’s set.  Both versions feature footage exclusive to that cut, so both are worth checking out.

While the myth of the interrupted performance may be more dramatic than the actual event, this new Blu-ray delivers the goods with a comprehensive and compelling overview of a notable moment from one of the biggest live events in rock history. It also gives viewers a vintage performance from a music legend at the height of her powers.

In 2016 and 2017, Jon Anderson, Trevor Rabin and Rick Wakemen hit the road for a series of concerts to celebrate the legacy of their band YES as it approached its 50th anniversary. That tour was called An Evening of YES Music & More.

A new concert film pulled from that tour’s March 25, 2017 show at the O2 Apollo in Manchester, England was recently released to mark the anniversary, and not only does it capture the artists in top form, it includes a setlist worthy of a half-century celebration.

Anderson (vocals), Rabin (guitar) and Wakeman (keyboards), who were all members during different eras of the band’s storied career, are joined by Lee Pomeroy (bass guitar) and Louis Molino III (drums). The quintet was on fire throughout the evening, impressively playing both intricate compositions and chart-topping pop songs with equal precision and enthusiasm.

Of note is the symphonic rock suite “Awaken,” which clocks in at 20+ minutes and which includes some nice instrumental flourishes courtesy of Anderson’s harp. This is quickly followed by the rock anthem of “Make It Easy/Owner Of A Lonely Heart,” which features Rabin’s muscular guitar riffs and some nice keytar work from the cape-clad Wakeman, who takes a leisurely stroll through the crowd during the song’s extended instrumental closing section.

Wakeman’s keyboard prowess is showcased throughout the concert, especially on the 10-minute mini-epic “And You & I: (I) Cord Of Life (II) Eclipse (III) The Preacher, The Teacher (IV) Apocalypse,” the latter rock sections of “I’ve Seen All Good People: (I) Your Move (II) All Good People,” and the encore “Roundabout.”

In addition to great musicianship, there is an obvious sense of joy radiating from the stage. There seems to be a genuine love and shared admiration between the principal players, one that is reflected by the sold-out audience.

A standard-style concert recording, this DVD boasts crisp and clear images, along with an outstanding surround sound track that calls attention to the intricate instrumental and vocal layers the band creates in its songs.

Given its focus on some of the band’s most beloved songs, the tightness of the ensemble and the quality of the audio and video components, this 50th Anniversary: Live At The Apollo release is an easy recommendation for hardcore and casual fans, alike.