Making or writing music for kids is a notoriously tricky thing, unless you’re a kid yourself. You can either make music that’s too simplistic for kids, who often have complex tastes and bizarre and disturbing senses of humor, or you can make music that’s too complicated, losing some of the fun, singalong aspects of the best kids music. There’s a delicate balance to be struck, and especially when working with American folk music as your base, it can be difficult to know what really works for kids. So here are four albums that get it right:

OK, first things first: I always thought that the callous disposal of George’s fiancée Susan on Seinfeld was the moment when you realized that he was a total sociopath. It’s also the moment when this wonderful TV series lost its sense of fun. So if you’re reading this, George Costanza, I think you suck. Happily, Susan has a life outside of Seinfeld, or rather Heidi Swedberg (pictured above), the actress who played Susan, has a life. She’s just released an album of children’s songs as Heidi Swedberg & The Sukey Jump Band, and it’s one of the catchiest, most infectiously joyful albums that I’ve heard in a while.

There’s a kind of fun, acting vibe to the album, maybe something I’m picking up from the cover shots of Heidi in various costumes (including a killer Frida Kahlo costume), but also from the fact that musically she’s trying on a lot of different personas here. What’s great is that they each work. She’s a literate librarian, writing a beautiful tune to the old poem ” The Owl and the Pussycat.” She’s a cabaret trickster, crooning the classic “Istanbul.” She’s an Elizabeth Mitchell-like folkster with the traditional songs “Little Birdie” and “Hobo’s Lullaby.” She’s a globetrotter with Haitian trad song “Wi Wa” and her Spanish language songs like the very catchy “Al Tambor.” And she’s even a budding funkster with “Boogie Man”. Throughout, Swedberg’s main instrument is her ukulele, played with some serious skill and discerning taste. Turns out she first started playing ukulele as a kid growing up in Kailua, HI, so don’t think for a second this is a hipster ukulele record. It’s the real deal, and in fact Swedberg teaches online uke lessons, so uke it up if you want to learn how!

I love this interview with Swedberg from The Huffington Post: “Folk songs don’t tend to be about things. A lot of people who write songs for kids tend to write songs about brushing your teeth and putting on your pajamas. It’s not my style. Sometimes there’s also a cute factor, which I don’t swallow well. When you look at folk songs or even folk songs for children, they don’t tend to be about anything… They’re songs about songs. They’re not just on the nose in meaning. Look at My Bonnie Lies Over the Ocean, which is a song about death and longing. That’s a song about grief, but no one’s talking about processing and dealing with grief. You just get on with it. That’s why those songs are so powerful. Once you learn that song, it stays with you.” If there’s any justice, Heidi Swedberg will be the next breakout kids music artist. Just remember you heard it here first.

Kids Review: My four year old daughter says she liked “The rock ‘n roll thing she does. Da da da da da, yeah!” Not sure what that means exactly. My seven year old daughter didn’t have a direct review–other than saying she liked the song “Cup of Tea” a lot–but she did draw this killer kitty cat while listening to “The Owl and the Pussy Cat:”

Alice DiMicele. If I Were An Otter: Songs for Kids of All Ages.
2013. Alice Otter Music.

This album’s a pure delight, and I can attest that the title of “Songs for Kids of All Ages” is absolutely true. I’ve heard Alice DiMicele‘s politically charged songwriting for a while, since she’s originally from my hometown of Ashland, Oregon, but this album came out of left field for me. It doesn’t have any of the hallmarks of singer-songwriter territory, but instead it’s a fun-loving mix of original and traditional songs, sung by a woman who’s obviously having a great time. The band is top-notch and each track is completely varied. It’s like a little treasure box, opening up new sides to the artist at each turn. Of course it’s hard to go wrong with songs like “This Little Light of Mine;” it’s pretty much impossible not to feel great when singing that song. But the other songs on the album attest to an artist who’s led so many singalongs that she’s developed a true gift for infusing a song with fun, loving energy. “City Mouse/Country Mouse,” an original song from DiMicele that features a duet with Vince Herman (Leftover Salmon) is a great kids song and a sign that DiMicele has a real, and perhaps previously unreleased, talent for writing kids music. There’s a strong environmental bent to the album, but it’s delivered with a lot of heart. “Celebrate the Rain” is like an old gospel round, but filled with uplifting lyrics about the natural world. 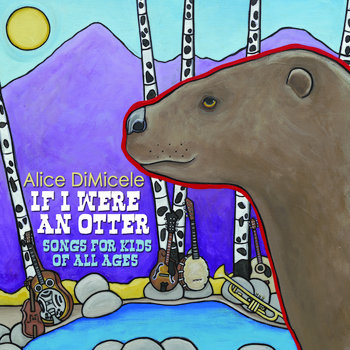 Though the songs on If I Were An Otter are certainly kid-friendly, as you listen to the album you start to get the feeling that this ultimately became a kind of excuse for DiMicele to just cut loose and enjoy herself with very talented musical friends. And that’s a wonderful thing.

Kids Review: I’m happy to say that my 7 year old daughter and I were singing along instantly to the opening song, “If I Were An Otter.” It’s a fun little song with a lot of child-like joy at its heart, so my daughter loved it. My four year old summarily declared it “The Best Song I’ve Ever Heard!” So there’s that too. My 7 year old was happy to have “Three Little Birds” too, the Bob Marley song, as it’s already one of her favorites.

PS: If you buy this album on Bandcamp, you get a coloring/song book of the album with sheet music so you can sing/play along at home. How cool is that?

I held off reviewing this childrens book and album mainly because Zach’s an old family friend and the accompanying album of music features not only artists we’ve worked for as publicists, but also my wife, Dejah, singing “Simple Gifts.” But this album has been in our car for the past year, and it’s become my daughters’ favorite album. My littlest one has a huge love for Pharis & Jason Romero’s track “Charming Betsy” and demands this track constantly, singing along happily to the slightly depressing lyrics from the back seat. So I figure this has passed the objectivity test in some way.

Zach Hudson works as an English teacher in Troutdale (a suburb of Portland, OR), and plays the banjo and fiddle in his spare time. The Banjo is his first published children’s book, and it’s a well built and powerfully simple ode to the humblest of instruments. The plot: Young Peter wants to join the orchestra, but his parents won’t get him an instrument. He receives a banjo from a yard sale, but then the orchestra teachers refuse to let him play since it’s not a symphonic instrument. But regardless of the adults’ lack of belief in his ability, he teaches himself to play and soon discovers an unlikely ally at school. It’s an excellent book, firstly for its ability to convey the quiet desperation of childhood and the overwhelming feeling all kids have that no adult can understand what they truly want. That’s an emotion too often left out of kids books these days (though the great kids book authors of the 70s knew this emotion very very well). Secondly, the book is the first I’ve read that can convey the process of actually learning an instrument. There’s something magical about learning an instrument, and the sense of accomplishment from learning even the simplest melody certainly fueled my own childhood interest in music. And thirdly, I love that this book is a collaboration between Zach, who wrote the story, and his own father, Jere Hudson, a former high school art teacher who provides the black and white drawings.

Zach talked to some of his favorite old-time banjo players and put together a compilation album of banjo music that comes with the book. It’s a wonderful idea and provides for a beautiful and entertaining album. My daughters love this accompanying album, which features music from Pharis & Jason Romero, Rising Appalachia, Nadine & Sammy from Foghorn Stringband, Squirrel Butter, and Professor Banjo. Oh yeah, and my wife, but I think I’m a bit biased about that track in particular. 🙂

Bottom Line: This book/album combo makes a great gift to friends or it can provide lovely music and discussions for your own family. Or heck, maybe it’ll inspire your kid to pick up the banjo and become the next Mumford Son!

BUY THE ALBUM FROM AMAZON

Eclectic global record label Putumayo has the kids music market on lock. If you haven’t checked out their “Dreamland” series of albums, do so NOW. That series is full of seriously beautiful music perfectly blended to relax and calm the mind. Putumayo also has the “Playground” series of global kids music which is intended for a slightly rowdier crowd of youngsters. American Playground is their foray into Americana in this series, but it’s really a roundup of the top kids music artists who work in American folk music. Dan Zanes, Elizabeth Mitchell, and Johnny Bregar. It’s a pretty “safe” compilation, meaning that most of the songs are very familiar to anyone with a love for American folk. Where the compilation excels is in the heartfelt and fun versions of each of these songs. “You Are My Sunshine” comes alive as a rootin-tootin Western song via Buck Howdy, “This Little Light of Mine” is given a straight-ahead folk treatment from Victor Johnson that lets the lyrics really shine, and even “She’ll be Coming Round the Mountain” is hard to resists in the hands of Johnny Bregar. The only flops here, in my opinion, are Diane Taraz‘s “Oh Susannah,” a song so old and tired it should never ever be covered again, and Phil Rosenthal‘s “This Land is Your Land” which leaches out all of the childlike anarchy of the original that made it so great. But Guy Davis‘ “We All Need More Kindness in This World” more than makes up for these issues. And Dan Zanes’ “Saro Jane” is a real highlight. Overall this collection is fun for the adults and kids alike and though the songs aren’t anything new, they’re still a helluva lot of fun to sing along to.

Kids Review: My seven year old daughter gave this two thumbs up, though she didn’t agree with Guy Davis that “we all need more hugs in this world.” When asked why, she replied that she didn’t think chickens should be hugging. She was unavailable for further comment on this issue. My four year old daughter cared FAR more about the album art than the music. She went through each character on the cover asking us who we wanted to be. When I replied I wanted to be the bear, she loudly exclaimed, “But Dad, there are lots of bears here. WHICH bear do you want to be?” I eventually settled on the armadillo.

BUY THE ALBUM FROM AMAZON

YOU CAN LISTEN TO THE ALBUM ON BANDCAMP: