﻿Enjoyed the show. Big surprise to see Arcade Fire win album. Can’t say much for the presentation of their first song with the strobe lights and bicycle helmet camera. Impossible to watch. Saying we will “play one more song because we like music”, yeah, but mostly because you *get to*. Unlike the perennial R&B’ers, don’t expect to see this “alternative rock” band on there again. To point out how goofy the awards are: AF lost to The Black Keys for Best Alternative Rock Album but won Best Album for all categories put together. Huh?

Another surprise was Esperenza Spalding, a jazzer, winning best new artist over Beiber. And what up with her not wearing black? I’m tired of Beiber already and his chumming with Will Smith’s kid and Jay Z(?) last night. Why can’t guys like Jay Z, Usher, Drake, Kanye etc do classic doo woppy R&B like what Bruno Mars and company did last night? Excellent. Or like the F*ck You song. What’s up with Eminem’s swearing and anger? I almost wanted him to win Best Album so there’d be no chance of him going postal. Listened to his Recovery album and the spots where he’s not griping, where its just music or a woman singing, are pretty good.

I really enjoyed M&Sons and the Avetts and with Dylan. Bob’s throat frog was louder than him but I enjoyed his gestures and the spectacle. The Avetts should have done a song in which they could both boogy on strings. The song they did was too rushed. Don’t remember them even having a keyboard on stage when I saw them a couple years ago.

Weak song with “I need you” ad nausem, but I enjoyed Jagger being Mick.

Jolene was okay, but Corporate Nashville didn’t do much for its cause with Lady Antebellum and Miranba Lambert’s milk toast. 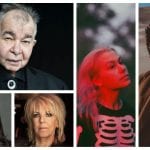 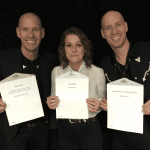