The Maria Schneider Orchestra’s ravishing new recording, The Thompson Fields, demonstrates her evolving vision for the evocative and deep nuances of sonic beauty that her music now radiates. But there’s a concept at work as well. She’s investigating the hidden realms of life — the flora and fauna, and the ever-evanescent weather dynamics — of her native rural Minnesota.

With Schneider’s extraordinary skills composing for a gifted array of musicians, she makes this almost secret world come alive in the music. And she makes a persuasive case that humans should cultivate a stronger ties to that natural world. Here’s where her deepest cultural and biological roots show. The title refers to Schneider family neighbors, the Thompson family, which has kept a native prairie alive for generations.

The sumptuously packaged CD includes Schneider’s intimate liner notes, color images of birds from the Audubon society collection, and several fold-out photographs including a fairly breathtaking shot of a storm brewing over the Minnesota countryside.

It’s also fascinating to see where such sensitive and sophisticated music came from. That’s why it’s Schneider is the perfect person to provide inquisitive listeners with a guide to the music of her greatest influence, Gil Evans.

Perhaps nobody is more qualified to assess the best of Gil Evans. She served as the great composer and arranger’s musical assistant from 1985 to his death in 1988. We’re fortuate that she put on her critic’s hat for this column enumerating in detail the Gil Evans best “dozen” pieces. I encountered the column, put together by Ted Panken for jazz.com, on Ryan Truesdell’s website. 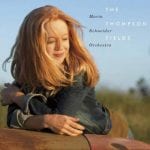