FROM RUSSIA WITH LOVE: Shattered Stereotypes and Jet-Lagged Gratitude 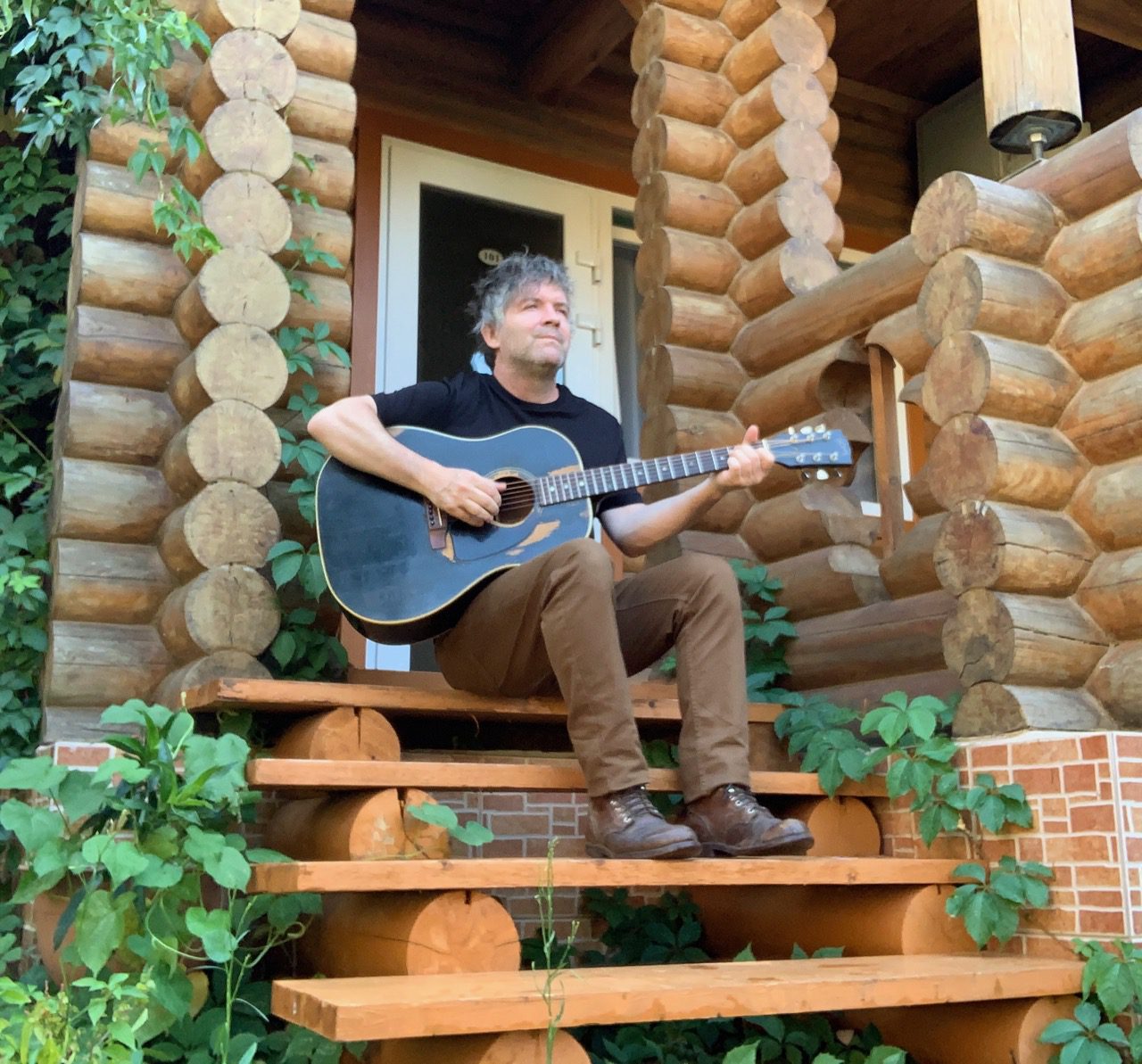 American singer-songwriter Tim Easton plays his guitar outside his hotel in Lazarevskoye, Russia, on the Black Sea. He's in Russia this month with the Forum for Cultural Engagement program, in conjunction with the US State Department. (Photos courtesy of Tim Easton)

EDITOR’S NOTE: Singer-songwriter Tim Easton is visiting and playing music in Russia this month with the Forum for Cultural Engagement, in conjunction with the US State Department. This is the first of four weekly dispatches for No Depression on the people he meets, the music he hears, and the things he learns along the way.

I can’t believe that I am in Russia. Not only that, I am here to play music, sing songs, and participate in a cultural exchange between our nations. I am traveling all around this massive country for one month, playing theaters, clubs, and schools. I am also teaching workshops and giving talks about being an American songwriter, all while experiencing Russian culture, music, food, and daily life in the big cities and rural towns. 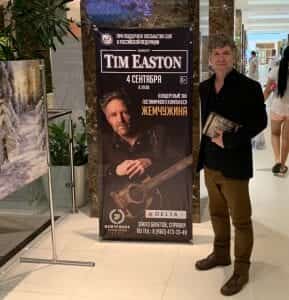 My initial dream to visit Russia grew strong when I was a street musician in Prague after the Velvet Revolution, when Soviet and Communist rule had finally loosened its grip on Czechoslovakia. After the Berlin Wall went down in 1989, the world-changing effects of Mikhail Gorbachev’s Perestroika (“restructuring”) and Glasnost (“openness”) eventually led to the downfall of the Soviet state, and the borders opened up. Russian literature, including Gogol, Dostoevsky, and Solzhenitsyn, had also piqued my interest, but it was the words and music of Bob Dylan that had really planted the seed. Long before I ever stepped onto the Charles Bridge in Prague to turn the tourists’ loose change into my beer money, I heard lyrics that painted a life-changing picture.

My Canadian mother had a thing for Dylan. She would sit me down and have me listen to him before I was a teenager. More specifically, she made me listen to the song “With God on Our Side.” Its ultimate anti-war message had a massive impact on me, as did the way it was starkly delivered with one voice, a harmonica, and a guitar. A fair amount of America’s post-revolutionary history is in that song. You hear Dylan sing about the destruction of the American Indians, the Spanish-American War, the Civil War, the World Wars, and then, in the sixth verse:

I’ve learned to hate the Russians
All through my whole life
If another war starts
It’s them we must fight
To hate them and fear them
To run and to hide
And accept it all bravely
With God on my side.

These were powerful, frightening words to hear at that impressionable age. I wondered where he had learned to hate and fear so much. The song was like a documentary film, and, together with “Let Me Die in My Footsteps,” painted a disturbing picture that was unlike any pop song on the radio. I can still see the room as I sat and listened to “With God on Our Side” for the first time, and dropped the needle back to play it over and over until the entire vibe sunk into my psyche. The USSR was a mystical place where the music and literature were legendary, yet their government sent poets to prison and people were simply not allowed to speak their minds. There was no true freedom of the press, so the fascination grew because I knew that, just like in my country, the government and the people are two different things. I knew that there were people there with families that felt the same as me and did not want war at all.

In many ways, my life’s mission of traveling and singing songs started with that song. Journeys to Yugoslavia, Czechoslovakia, Spain, Dominican Republic (where I met my first Russians, who were stationed on a Soviet ship there), and eventually Cuba — all countries affected by an oppressive government — happened long before I was able to finally come to Russia, and I’d like to think that particular tune’s anti-war sentiment is underneath it all.

I am here this month because of the work of Washington, DC-based singer-songwriter Mary McBride and her Forum for Cultural Engagement. The FCE works with in conjunction with the US State Department in placing musicians in various locations around the globe, all part of a mission of playing music for public and social outreach. I am here as a solo acoustic performer and also joining up with regional bands who have learned my material. This is not a political mission. I am here to play songs and have musical exchanges with regional audiences and musicians. For a travel buff like myself, it’s a dream come true.

After one year of research and preparation, the journey here was not for the faint of traveling heart. It started in Nashville at 4 a.m. on Labor Day, with two flights to get to Moscow. I was beyond excited to arrive at Moscow’s modern Sheremetyevo International Airport. After clearing immigration and customs, I took the airport tram to my domestic connecting flight to Sochi to complete the 6,500-mile journey.

Sochi is a holiday destination for Russians of all stripes. It is on The Black Sea and is basically a resort town with pebble beaches, spas, swimming pools, and a lot of hotels built for the 2014 Winter Olympics. The Caucasus Mountains are nearby, and my first show on this trip was in the theater of a resort hotel right on the beach. 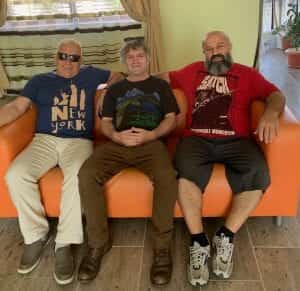 I had one rehearsal with a band, and they simply nailed it. I was stunned by their musical skills. As it turns out, they are the jazz heavies of the region. Vasiliy Fomichev played drums, and he was also the driver for the southern wing of the tour. Our first discussions, on the way from the airport to the hotel, were about Buddy Rich and The Beatles. As it turns out, trading Beatle cassettes was highly illegal in 1972, when Vasiliy would have first heard their music. Our whole conversation, and practically every exchange that needed more than basic sign language was facilitated by Maria Shustina, who is the Russian coordinator for the FCE. The excellent bass playing of Elhan Atakishiev helped steady the low end. He also called out the tunes in the setlist, which, as it turns out, was heavily loaded with ’70s-era Dylan songs on that first night, and even some Doc Watson and Woody Guthrie.

As far as Russian cultural experiences go, the first few days were more of the kind you would have at any resort town, where most of the activity is centered around lazing at the beach or going to the sauna. I took full advantage of this and swam in the Black Sea a few times a day just to work through the jet lag, which is still with me as of this writing. There were lots of families and kids and karaoke bands with the Euro disco beat going. On the first night, during a boardwalk stroll after my set, I saw five different karaoke bands with one particular trio singing “Blue Suede Shoes” with guitar, keys, and sax, and electronic backing tracks. Elvis, one of my country’s greatest ambassadors of rock and roll, truly is everywhere.

Day two found us playing another beach town gig, and day three had us on an exhilarating five-hour drive through the mountains to the outskirts of Krasnodar, a city of 800,000 people with a remarkable history and a lot of war monuments. Once here we checked into an expansive hotel above the brand new Club Paulaner, which was basically a brewpub with a solid sound system and a pretty good burger too. The space itself felt very familiar, and on this night we were joined by German Khudyakov on keyboards, who is an absolute wizard. As a band, we definitely got the job done. It’s been amazing to talk to people afterward who are basically experiencing American roots music for the first time, played by three Russians and a Midwestern American.

At one point I called out George Gershwin’s “Summertime,” which is a standard for most musicians, and these guys took it to a new level. The following night we repeated our set with a few additions I called on the spot, including “Factory Girl” by The Rolling Stones. When you have musicians of this caliber, calling out an energetic two-chord folk jam leads to pure exhilaration and joy. The entire joint was dancing and, like every other night, I spent much of the time after the set taking selfies with Russians who were at the show. It is a huge honor to be here and play for people who might not get to hear songs like this very often. 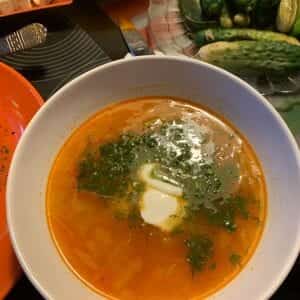 Last night, I also had my very first conversational exchange where a person actually said: “We make peace, not war.” In a way, it felt like exactly the reason I was there, other than to taste the amazing Kuban-style borscht made by Vasiliy’s wife, Natasha, which we all enjoyed before the show. I feel so very fortunate to be here as a representative of the US. There is a lot more to be said about the stereotypes that Americans have of Russians and vice versa, and I will address more of those issues next week as I pass through Moscow and have more discussions with the people I meet. Let’s say for now that it has been beautiful, sunny, and warm all week, not cold and gray whatsoever, and I haven’t seen one bottle of vodka on a table yet. Also, I am not being followed by the secret police.

Let us also just say that I choose to not live in the fear that Bob Dylan’s song was speaking about. Traveling certainly helps squash stereotypes. I am here to reach out to the Russian people, and find common ground between our families and friends, while also getting them to dance to the backbeat of the blues, which is where the majority of American music comes from; jazz, our nation’s classical music, which involves the Russian national tradition of day-to-day improvising; rock and roll; plus country music and the occasional folk and story song. Our nation went through a lot to bring the world this music, and it’s a privilege to bring it to the Russians and to hear how they play it, and a joy to watch them dance.