FreshGrass Is Upon Us, Y’all

The weather is cooling a bit, the stages are going up, the kegs of FreshGrass IPA are being rolled in, and the banjos will soon be tuned. Yes, it’s time again for the FreshGrass Festival.

This will be my third year attending the festival, which always reminds me a bit of Pickathon, Newport, and Cayamo. Yes, I’m employed by the FreshGrass Foundation, but I’ve been to countless festivals in my 20+ years in this industry, and have found the FreshGrass Festival to be one of the most thoroughly music-focused festivals I’ve ever been to. The lineups have become more diverse each year, as the producers make sure to bring artists over from abroad. And, as the merging between No Depression and FreshGrass has deepened, the breadth of music ND covers has begun to get wrapped into the well-established FreshGrass palate, which generally already values a strong balance between tradition and innovation, particularly in bluegrass music, though not exclusively.

In fact, this year, the stage in “Courtyard D” will be called the No Depression Stage, and will be host to my fellow Ashevillians Zoe & Cloyd, plus Rana Santacruz, Sierra Hull, Ruthie Foster, Parsonsfield, Stephane Wrembel, and Doyle Lawson & Quicksilver.

Just beyond the museum building, out in Joe’s Field, the mainstage is being prepped for appearances from Glen Hansard, Lau, Old Crow Medicine Show, Alison Brown (who will make two appearances there — one playing her own set and one “with friends,” as a tribute to The Band), Aoife O’Donovan, Rosanne Cash, and Ricky Skaggs & Kentucky Thunder, among many others. (A full lineup is here.)

In fact, take one look at the schedule and it starts to read like a who’s-who of ND’s history of music coverage. But one of the loveliest things about FreshGrass is its collaboration with the Massachusetts Museum of Contemporary Art (Mass MoCA) — an old textile factory that’s been repurposed into a sprawling space to house some of the most beautiful and innovative art pieces in the US. Festivalgoers get full access to the museum for the weekend, along with their ticket to the music. This balance between great roots music and great art makes FreshGrass a unique and truly art-centric festival, from top to bottom. After all, there are no Ferris wheels or water slides or other distractions. There is the music, the art, and the people, and that is always enough.

Workshops take place in artist studios, fiddle tune jams pop up in museum courtyards, and the showcase space inside the museum is employed for late night concerts, FreshScores, and showcases from the FreshGrass Award contestants. At this year’s FreshGrass Awards (one of the FreshGrass Foundation‘s giving programs), folks can get a load of some tremendous up-and-comers in the categories of Band, Duo, Banjo, and Fiddle. As a testament to how well this festival does at celebrating the best music available, the awards showcases have become one of the weekend’s biggest draws, with folks crowding into the museum to hear previously-unknown-to-them players silence the room. This year’s band finalists are Blind Owl Band, Colebrook Road, Cabin Creek, Damn Tall Buildings, and Last Revel. Duo finalists are Pepper and Sassafras, Matthew Hornell & Andrew Sneddon, Two Strikes, the Robin Davis Duo, the Page Turners, and Mountain and the Moon. Banjo finalists are Steven Moore, Jordan Alleman, Victor Furtado, Takumi Kodera, and Petr Vosta. And fiddle finalists are Avery Ballota, Julian Pinelli, Joe McAnulty, and Jordan Rast.

FreshScores is another FreshGrass Foundation program that commissions roots musicians to compose a film score that they play live, along with a classic or silent movie. This year’s FreshScores composers are Aoife O’Donovan, Darol Anger, Stephane Wrembel, and Parsonsfield. To boot, Joe Walsh, Matt Glaser, Adam and Happy Traum, and Alison Brown are all providing musical workshops.

And in case all of this wasn’t enough excitement, FreshGrass will be the first place where you can walk into a store and buy a copy of our Fall issue, “Speak Up!” (The second place will be at AMA, but we’ll tell you more about that later.) It’s a topical doozy, with contributions from Woody Guthrie, Amy Ray, Eliza Gilkyson, Mark Erelli, Mary Gauthier, Allison Moorer, and Scott Miller. There are long features on John Prine, the Dixie Chicks, “We Shall Overcome,” race in country music, how artists react to controversial laws, how music helps veterans surmount trauma, and how music has been employed in prisons, and short stories that include folks like Johnny Dowd, Hamell on Trial, the Kennedys, Anais Mitchell, Fantastic Negrito, and so much more. If you can’t make it to the festival, you can order one online now.

But, really, if you’re in the neighborhood, you should go to the festival. 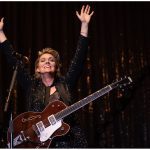