I am a sucker for good slide guitar, so I was excited to see The Slide Sessions, a collaboration by Abbie Gardner, Jim Henry, Cliff Eberhardt, and Brooks Williams at Club Passim this week. I had no idea how rare a treat this was; the last time they performed as The Slide Sessions was six years ago.

I was familiar with Abbie’s Americana styling from her work with Red Molly, and knew of Cliff because he has been a blues/rock/folk fixture on the Boston acoustic music scene for many years. Jim’s background is also in Americana while Brooks is known  as a blues musician.

They casually took the stage, making the audience feel as if they had invited us into their living room for a rehearsal. They did not appear to be working from a set list; each took turns choosing the next song and the key in which it would be played, and that musician would lead on that song.

They treated us to a wide variety of music styles, from delta blues to Piedmont blues to rock to country, and probably a number of others. Some of the songs they performed were Robert Johnson’s ‘Come on in My Kitchen’, Chuck Berry’s ‘Memphis’, Blind Boy Fuller’s ‘Weeping Willow Blues’, Lucinda Williams’ ‘Can’t Let Go’, and Doc Watson’s ‘Sittin on Top of the World’. They ended with Jim choosing Townes Van Zandt’s ‘If You Needed Me’.

Abbie played only the dobro, at which she excels. Jim played guitar, dobro, and a Power Slide (yes, that’s the brand name) guitar for which he was teased because the others were unfamiliar with it. Cliff played mostly a resonator guitar, but picked up a regular guitar for several songs. Brooks switched between guitar and resonator guitar.

They continuously joked with one another – about the key that was chosen for a particular song mostly – and showed great admiration for the others’ prowess. It is not often that a musician lets the audience know how grateful he or she feels at sharing the stage with a musician they admire, but this happened throughout the show.

Each of these fine slide musicians can stand on their own, yet together they are almost greater than the sum of their parts. Hopefully they will tour as The Slide Sessions soon and come to a city near you.

To see my photos from this wonderful show, go to my post on Suze Reviews the Blues. 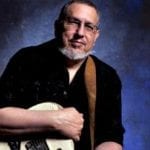 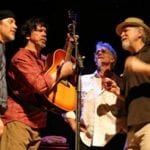 Bourbon Street Symphony: the subdudes at The Birchmere