Julie Christensen bowed deeply to the standing-room-only crowd at The Family Wash, a venerable East Nashville music venue, as her band, Stone Cupid, kicked into a full-bore jam. She blew a two-handed kiss to the audience, exited stage left, and watched from the audience as her bandmates closed out the show. She climbed back onstage for the encore—a powerful rendition of Leonard Cohen’s “Anthem.” It’s a song Christensen knows well. And she should—she sang on Cohen’s studio version and countless times in concert with him. Her stirring performance in the Family Wash hushed the room. It was the acclaimed vocalist’s final performance at the humble hangout.

Ring the bells that still can ring
Forget your perfect offering
There is a crack, a crack in everything
That’s how the light gets in

All told, Christensen’s performance that night fell somewhere between rock, alt-country, and roots music. Musically, she is a far cry from where she first made her mark with her now-former husband as co-leaders of the influential Los Angeles punk band the Divine Horsemen. Between 1984 and 1987, the band produced three studio albums and two EPs. They played the West Coast circuit including Club Lingerie and the Music Machine, which was a popular venue that often featured heavy-hitters such as the Circle Jerks. The Divine Horsemen’s sound foreshadowed alt-country before there was such a genre as evidenced by the twangy, tremolo-ridden Telecaster in “Tears Fall Away” from their first album, Time Stands Still, on Enigma Records (1984). Chris sang low, while Christensen let fly powerful high harmonies throughout the band’s catalog. As their popularity grew, they headed east, playing the Eastern seaboard several times including D.C.’s famed 9:30 Club and the legendary CBGB in New York. But Christensen had fallen into damaging habits. She abused alcohol and used heroin with regularity—she was an addict.

“I realized I needed to quit that lifestyle a couple of years before I was able to do it—it had become a daily thing,” she said. “I must have tried to kick it 15 times before I finally tried 12-step meetings. I felt my story was too gnarly for some fellowships and not gnarly enough for others—I related to the guys who had gotten out of prison and had tattoos on their face because I felt like I had been in a prison of drugs and alcohol.”

After she and her husband divorced, she redirected her career toward performing in nightclubs as a soulful pop singer. A few months later, she auditioned to be a featured backup singer with Cohen, an eventual Rock & Roll Hall of Fame inductee. At the end of the audition, he asked her to contemplate the rigors of a world tour before accepting the position.

“He told me this was going to be a grueling tour, playing four or five times each week,” Christensen said. “I told him that I had just come off the road myself, and had recently changed my clothes in the bathroom at CBGBs. Just picture the bathroom in the movie Trainspotting, and you’ll get the picture.”

“I was only six months clean when I first went out on the road with him,” she said.

Although she’s not a practicing Buddhist, she meditates using the techniques she learned from the famous Buddhist teacher Joshu Sasaki Roshi, credited with popularizing Zen Buddhism in the United States. She met the master Buddhist through Cohen, whom she described as one of the most centered people she’s ever met.

“He is a centered, focused individual,” she said. “I felt safe touring with him. He wasn’t somebody who was out of hand with any of his vices.”

Christensen appears in the award-winning 2005 documentary Leonard Cohen: I’m Your Man, as well as scores of live-performance videos on YouTube playing with Cohen, Lou Reed, and others.

“We played beautiful concert halls and opera houses around the world,” she said. “We played Carnegie Hall and The Fillmore. It was a beautiful, magical time.”

An Athletic Event
Christensen carries a quiet-but-commanding gravity with her. She’s tall and striking, with tight, short blond curls that, at times, seem to be living lives of their own. She dresses stylishly—often offering a tasteful reboot of film-noir glamour. And she moves that way, too—slowly, and deliberately. She is not the kind of singer who demurely clears her throat as she sidles up to the microphone. Nor is she the type of singer who delicately clinches her fist to indicate to the audience that she has entered the soulful part of a song. No, Julie Christensen belts out her songs in a way that is demonstrative, expressive, forceful even, and at times, explosive. She describes singing as “an athletic event.”

“I have exercise-induced asthma, and I usually use an inhaler before a show,” she said. “I was touring with Leonard in 1993, and they used a smoke machine [on stage], and one day I threw a hissy fit offstage. Leonard was in the green room in Norway—I didn’t know that he was talking to a journalist at the time, when I burst in and said, ‘Who do I have to fuck to get those smoke machines turned down?’ ‘That would be me, darling,’ he said.”

The writer featured the encounter prominently in the article.

To say Julie Christensen is a diva would misrepresent the wholeness of her being. To say that she is not would deny an inarguable truth. Her swagger is true to her rebellious punk-rock roots, and refined through working with the likes of Cohen, Iggy Pop, Public Image Limited, and Todd Rundgren, who produced a solo album of hers in 1990 that fell victim to record-label politics and was never released. She decidedly goes where the music carries her, until the music doesn’t carry her where she wants to go—then she kicks it with spurs. She was on the bill to sing Cohen’s “Joan of Arc” as a duet with Lou Reed in 2006 in Santa Barbara, Calif. The two had performed the Cohen classic together earlier in the year, but this time Reed, widely regarded as a temperamental genius, had worked up a new guitar part, raising the key four steps in the process. To hit the notes in the already-demanding song, Christensen brought out the spurs and belted a forceful performance that she would later describe as “well received” and “favorably reviewed.” But before published reviews could support her claim, Reed wanted to register a review of his own.

“It was two and a half keys higher than we did it in Dublin,” she said. “In order to get out my part, I had to really haul off and sing, or else I would have had to sing it falsetto and that wasn’t going to be the same. Lou thought I was trying to hog the stage. When we went backstage, he said ‘You couldn’t have done that with your jazz guys, this is rock & roll.’ He’s right, and I know not to upstage the bandleader. But that was the only way I could have performed it in that key. That was the last time I spoke to him. And I felt bad about that, especially when he died.”

Eastbound from Ojai
Christensen moved from Ojai, Calif., to East Nashville in 2013 with her husband, actor John Diehl—he’s worked steadily in film for decades, and is perhaps best known for his role as Det. Larry Zito on Miami Vice. Their son, Magnus, now a recent college graduate, relocated with them. Christensen had met singer/songwriter Amelia White while attending the 2012 International Folk Alliance conference in Memphis. White described to Christensen the fertile musical scene of East Nashville, where she’s based, and encouraged her to come to Nashville for AmericanaFest later that year—which she did.

“Nashville wasn’t on my radar until I met Amelia. It felt like Austin, Texas, felt in the 1970s,” Christensen said. “The unpretentiousness of it, and the willingness of the creative community to be open to new blood while being loyal to the people who are already here.”

She played a gig the night before AmericanaFest at Two Old Hippies with White, Tommy Womack, and John Jackson, and visited the Family Wash for the first time a few nights later, playing with Doug and Telisha Williams of the Wild Ponies.

“I immediately felt like the Wash was like a vortex and a place to call home,” she said.

She asked Diehl to visit Nashville as a relocation test drive. They moved as soon as they could sell their home in Ojai.

“People were incredulous that we would leave Ojai for East Nashville,” she said. “Why would you leave paradise? Well, East Nashville is our paradise.”

This winter, Stone Cupid will release The Cardinal, a powerful 12-song LP Christensen co-produced with Jeff Turmes, which prominently features guitarists Chris Tench and Sergio Webb, Bones Hillman on bass, and drummer Steve Latanation. Christensen wrote five of the cuts and co-wrote another three with Laura Curtis (“Riverside” and “Broken Wing”), and John Hadley and David Olney (“No Mercy”). The record also includes “Shed My Skin” written by Dan Navarro, “Girl in the Sky” by Amelia White, and “Would You Love Me?” by Chuck Prophet. Perhaps the standout cut on The Cardinal is “Saint on a Chain,” by East Nashville powerhouse Kevin Gordon. In typical Gordon fashion, the song is an oddly romantic tale of a small-town fella whose bad choices lead him to contemplate steering his speeding car to a white-knuckle fiery end.

“As he’s driving toward his death at 85 MPH, he asks this Saint Christopher medallion to carry him across to the other shore,” Christensen said. “It feels like a male version of Thelma and Louise. The first time I heard Kevin play it, I was blown away. I could hear my band doing it—I could hear it, the whole thing, it was like an aural hallucination. It just came over me like a wash. That song is like a Faulkner story.”

As solid as the musicianship and songwriting are throughout The Cardinal, the real gems are Christensen’s soaring seasoned vocals. The Cardinal offers a “bonus” track: Christensen’s patient rendition of Leonard Cohen’s “Anthem”—an ideal cut to showcase her power and versatility as a vocalist.

Justin Townes Earle In His Own Right 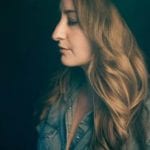