Even though I’ve been hearing a lot about Folk Alliance over the years, this was the first year I attended. I went partly because I’d never been to Memphis – I wanted to see the city and some of its attractions – but also because I thought it was time to see Folk Alliance for myself.

Folk Alliance is unlike some of the other music conferences I’ve been to in that all the panels and showcases take place in a hotel rather than being in nearby nightclubs and music venues.  I generally prefer to see music in actual venues rather than hotel conference rooms and was put off by that a bit at first but in the end I appreciated that the sound was surprisingly great in every room and the close proximity of rooms made it possible to catch a few songs of several different acts in the same time slot which made for a productive and fun filled experience.

I have a habit of trying to fit in too much at music festivals, and all areas of my life for that matter, and then being more disappointed by what I didn’t see rather than enjoying what I chose instead.  Everywhere I go I wonder if I’m missing something better elsewhere. At Folk Alliance that annoying thought still cropped up on occasion but since most acts played multiple sets it was much easier than it usually is at such events to get a sampling of as many artists as possible.

In addition to the official Folk Alliance programmed showcases in the larger conference rooms, the rooms on the top three floors of the hotel were full of renegade showcases that various organizations and fans hosted throughout the day and into the wee hours of the morning. People spilled out into the hallways and music flowed from many rooms. It reminded me a bit of being at a college dorm party only better because the resident adviser or dorm monitor was nowhere to be found.  It was one big free for all with people of all ages cavorting, socializing and enjoying music together.  The hotel even set up a bar outside the elevator on the top floor so if you wanted a drink and there wasn’t one to be had in your room of choice you could get one there.

Some rooms had small sound systems but mostly there was no amplification and so you got a rare up close, intimate, personal interaction and performance from the artist. Imagine Sam Baker, Mark Olson, Steve Poltz and Web Wilder sitting in your bedroom playing in the round, it happened at Folk Alliance. One night I caught the Chapin Sisters in a small triangle shaped room lit only by black light and felt like I was in the cockpit of the mother ship. Their album didn’t grab me when it came out awhile back but that night the music they made was beautiful and mesmerizing and I’m now compelled to give it another listen.

Most artists played as many as five or six times throughout the conference so it was possible to sample lots of music and see old and new favorites more than once. Lewis Meyers, the executive director of Folk Alliance, was one of the four people who started SXSW and several people mentioned that this years Folk Alliance felt like the early days of SXSW. The Folk Alliance contract with the Marriott in Memphis runs through 2012, so it will be in Memphis one more year, then move to Toronto for  2013 and the location for the next five year period is yet to be determined. There is no room for growth in Memphis so they are looking for other options. The board heard presentations from the three cities hoping to secure the next contract: Louisville, Kansas City, Mo., and Memphis.

The breakout band was the Dunwell Brothers from Leeds. People were buzzing about them and the music business folks in attendance were all clamoring for a chance to work with them.  I heard  the same thing happened with the Carolina Chocolate Drops at Folk Alliance a couple years back when they were largely unknown and look where they are now. I saw several sets by the Dunwell Brothers and if I had to pick an overall favorite they’d be it.  Watching them and feeling the reaction of the audience reminded me of seeing Neko Case, Whiskeytown, Fleet Foxes, The Head and the Heart and a few other bands prior to  being discovered by a wider audience.

Check out the video below and if you like that, here’s a another one.

My five runners up for best of festival are:

Pokey Lafarge-  I first became aware of Pokey due to several blogs and videos posted here on the ND site. He and his band play a sort of old timey, rag time music. Read Terry Roland’s review here to learn more about the band.

Lake Street Dive – This talented collective of artists from Boston and Brooklyn are each in other bands (The Sweet and Low Down, Joy Kills Sorrow, Girls, Guns and Glory, and possibly others I’m not aware of).  Lead singer Rachael Price has star power.

Ruby Jane – a 16 year old violin prodigy who played with her trusty sidekick Max Frost.  I haven’t verified this but someone said that she is the youngest fiddler to have played on the Grand Ole Oprey. She’s got a great voice and a bright future.

John Fullbright- a songwriter in the vein of Guy Clark, Townes Van Zandt, Mary Gauthier. He’s only in his early 20’s, yet one respected industry veteran friend commented that he was the best songwriter he’d heard in years.

Abigail Washburn and Kai Welch- many of you are probably already familiar with Abigail and generally I like to promote lesser known artists but her set was so stunning it had to be included.

There were lots of great artists who I didn’t get a chance to see but some of my other favorites were Deep Dark Woods, Sam Baker, Natalia Zukerman, Ron Sexsmith, Amy LaVere, Carolina Chocolate Drops, Hot Club of Cowtown, Wilderness of Manitoba, The Steel Wheels, Chatham County Line, The Honey Dewdrops, Mary Gauthier,  Joel Plaskett and Paul Thorn.

Several ND community members had offered up suggestions of things to do while I was in Memphis in the comments of Cody Breuler’s great blog Memphis: Center of the American Pop Universe and I tried to do as many as possible. I made it to the Civil Rights Museum, Stax Museum, Graceland, Gus’s Fried Chicken, Earnestine and Hazel’s, Beale Street and The Peabody Hotel to see the ducks.

I highly recommend a trip to Folk Alliance and Memphis. Put it on your list for next year! 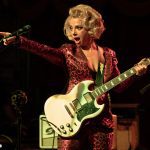