Firebrand Fridays – People Have The Power!

Sometimes it goes down that too many good things are happening at the same time, and in Los Angeles, sometimes that means you have to make tough choices. We were on our way downtown to the Prince Memorial at Los Angeles City Hall last Friday, when the traffic was taking so long we had to turn around and abort the mission if we wanted to be at Firebrand Fridays at Genghis Cohen – which we did. After a winter hiatus, the rousing evenings of people empowerment were just rebooted by Tom Morello and friends at the Chinese restaurant on Fairfax. 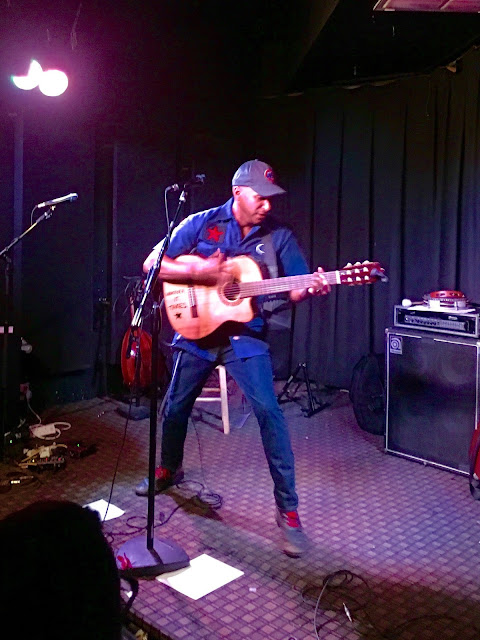 It was sad to not be downtown with my Prince people, but it also felt a little fake to me, like if it’s not happening in Minneapolis, why bother? I also didn’t feel like being sad, and knew being there would mean more crying, and I wanted to feel strong – which you always do after one of the Firebrand shows. 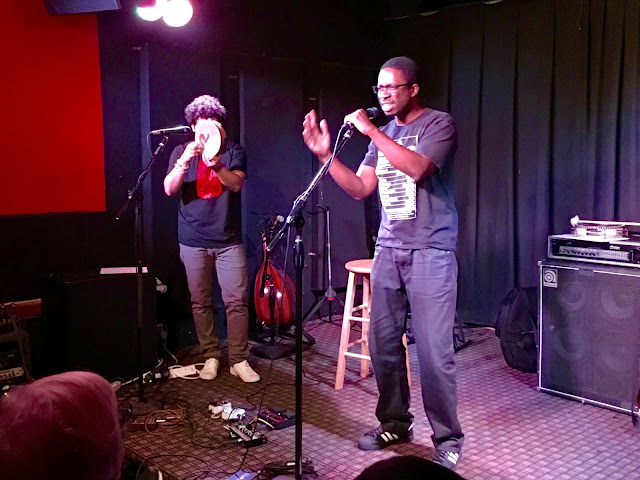 The night was a showcase of artists from Morello and Ryan Harvey’s Firebrand Records, and after a brief introduction by Morello about the night all being for a good cause (all proceeds go to assist PATH in their work with the homeless), their Kareem Samara and Sun Of Nun (Kevin James) opened the show playing the oud and rapping over recorded crowd noise tracks. It was cool, and set the tone for the night. There would be gorgeous playing, whipsmart lyrics, and a crowd all the way into it for the duration. It was on.

Jill Sobule charmed everyone, as usual. She played her truthful and funny “When They Say We Want Our America Back” about the whole immigration debate, the whole room shouted back the answer, “What the fuck do they mean?!” It’s pretty much a perfect song, and as Sobule always delivers the potent medicine with a spoonful of sugar, her point is most likely always heard. Smart. Sobule next covered Bowie with “All The Young Dudes”, and the crowd sang noisily along from the palm of her hand. 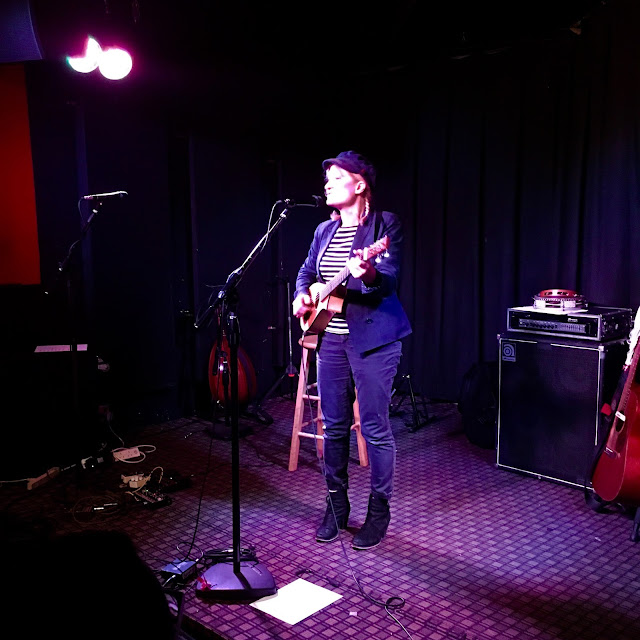 Ryan Harvey is one of the sources I look to the most for the most honest, there on the ground perspective of protest and refugee situations all over the world. From his native Baltimore to his recent stint rescuing refugee boats in Lesvos, Greece, Harvey walks the walk that he talks. I always find his posts on social media to be the most truthful and accurate on any given situation, and they provide a deeper understanding as to what’s really going on in the world. The same goes for his songs, and when he took the stage with Kareem Samara and Diego Souza, we were all transported along to the distant shores, watching for overcrowded boats in their song, “Thin Blue Border”. 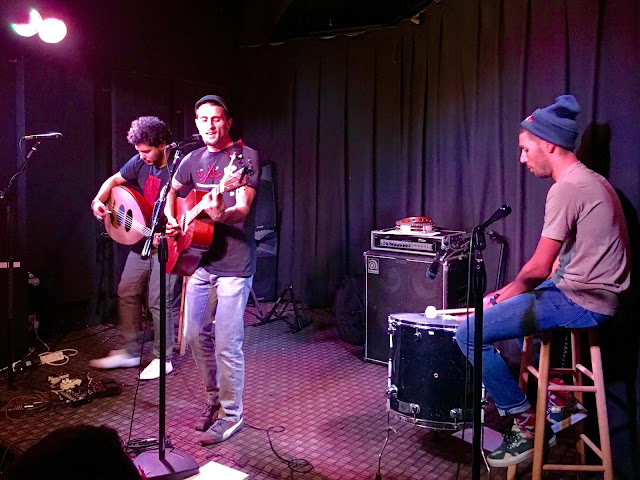 “See It Through” was written about the lack of response to the refugee crisis from the U.S., and its fast, frenetic tempo mimicked the urgency of the situation, imploring people to “Hold the line, even if your voice shakes!” Samara is a complete virtuoso on the oud, and a real joy to behold as he wove a spell around the important words.

Harvey explained that Egypt, Greece, Palestine, Turkey, Ferguson, MO, etc … all have something in common, which is that the same tear gas substance (made by the Combined Systems company out of Pennsylvania) has been used on people fighting for freedom in all of those places, and more. “Smell It In The Air” calls them out, saying, “There’s something that connects us, you can smell it in the air!” It’s pretty sinister stuff, and something no one should put up with. It was powerful, and as often happens after these guys play, you felt smarter. 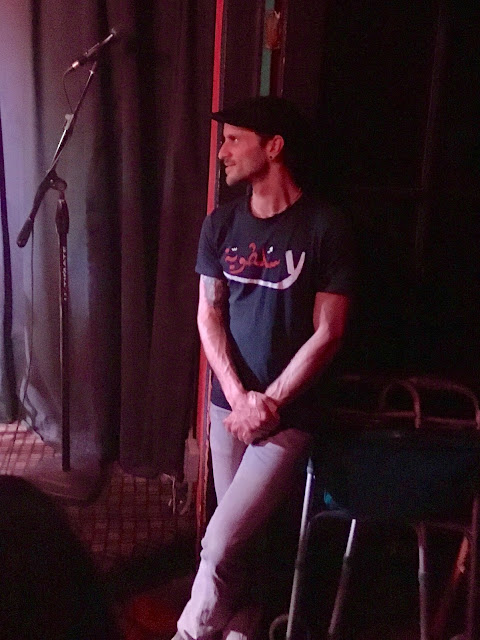 Harvey introduced his co-conspirator in Firebrand Records, and Morello took the stage to huge applause. “One Man Revolution” kicked off his set, and he blew on his harmonica and stomped his feet so ferociously that there was no way it was only a one man thing anymore. Everyone was on board, and it’s something to behold every time. Mary Morello was in her usual spot right down front, and her son next played her favorite, “The Garden Of Gethsemane”. The acoustic playing on this one is so lush and beautiful, it seems to put people in a trance. It silences the people so effectively that Morello is able to deliver the last verse entirely away from the mic. He says the song is about moments of doubt, but we were all very sure it was awesome. 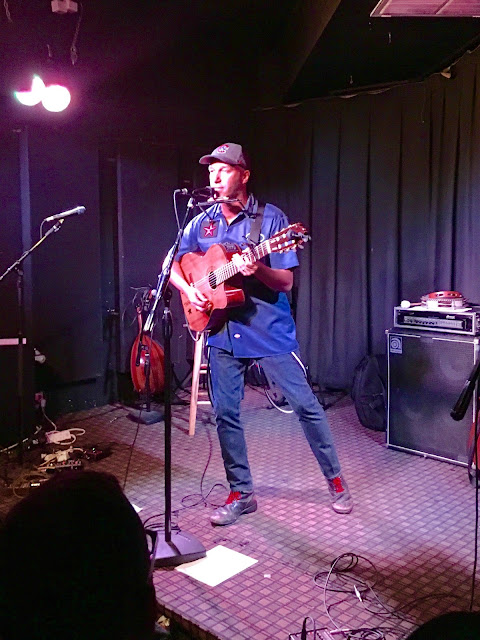 Morello then launched into “Flesh Shapes The Day” but forgot the words, and the crowd knew them for him. He explained that he’s coaching his son’s baseball team, so he didn’t have enough time to practice for the show, but his son did go 3 for 3 with two home runs! Worth it. He asked for requests, and as several deep catalog Nightwatchman tracks were shouted out, he did not hear my desire to hear “Purple Rain” yet again. Bummer. 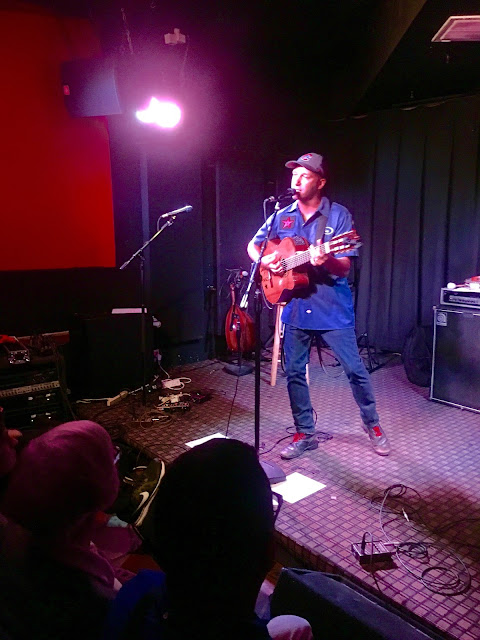 “Maximum Firepower” ended Morello’s set, with the sad truth sung that “The skin you’re in makes choices for you.” Every Morello song is timely and truthful, but this one felt very of the moment. And excellent. His conviction is tangible, from the hoarsely shouted lyrics to the fierce strumming, there really aren’t a whole lot more people you’d rather follow into battle. Because he MEANS it. Clearly. 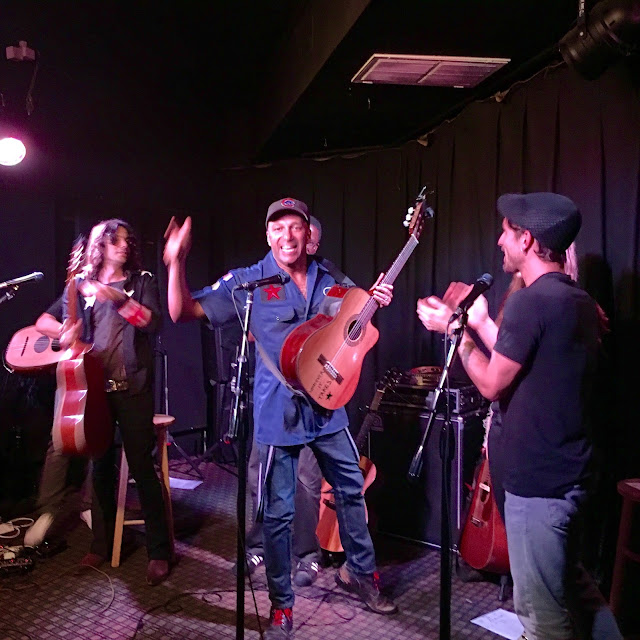 “Holy shit, I have to follow that?!” exclaimed Son Of Nun upon taking the stage, but he needn’t have worried, because the crowd was along for the night’s whole ride. We all joined in the rapper’s call and response, yelling, “Word is bond – That’s my song! Make that jam rock – All night long!” Son Of Nun is also from Baltimore, but gave it up for Los Angeles crowds after that one, ’cause we gave it some gusto. “You’re gonna leave with your shirt wet,” promised Son Of Nun, and he was not wrong. It was STEAMY in there, as the tiny, windowless room could not have been more packed. 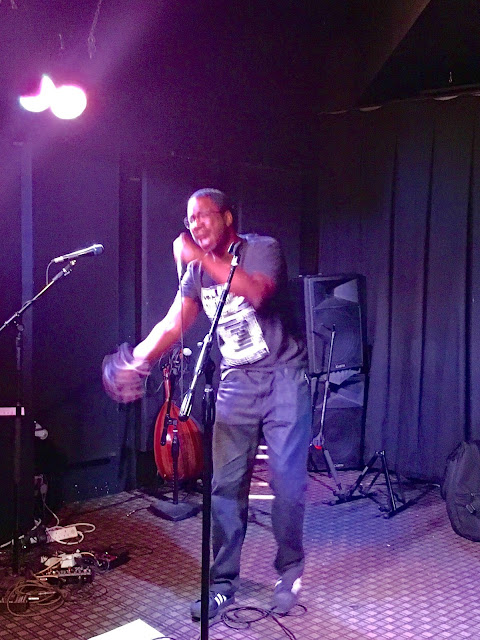 Like Harvey and Samara’s songs, every Son Of Nun lyric has bite and intelligence. Plus they’re fun to yell along with as we joined in on the raps for rebels. “It’s Like That” has us all chanting the names of Freddy Gray, Oscar Grant, Maya Hall, Tyrone West, Sandra Bland … and the sad list goes on. This song is saying ENOUGH, and throwing down a gauntlet … “If we don’t get it, SHUT IT DOWN!” Yes. We need more and more songs and artists out there, saying exactly this. It’s crucial. 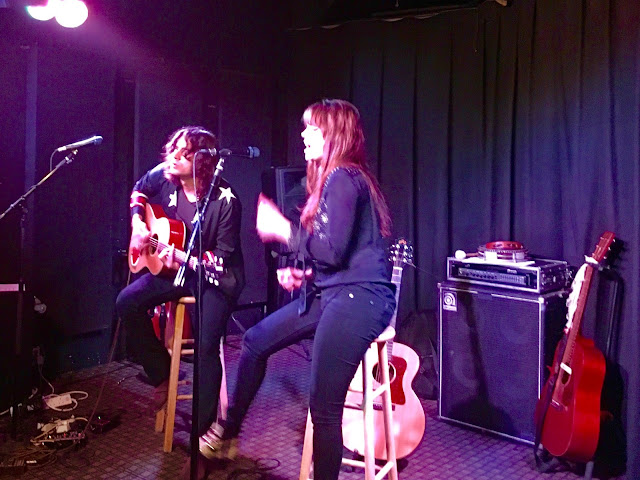 Morello introduced The Last Internationale by saying, “Next is Firebrand’s most exotically beautiful couple … you’ll see!” Sure enough, the gorgeous Delilah Paz and Edgey took the stage, but their great looks were almost immediately forgotten with the strength and beauty of their powerful playing and singing. I mean, they opened with Aretha Franklin’s “Freedom”! Powerhouse. TLI has me forever now after their next one, which was an original melody put to the lyrics of Kris Kristofferson’s “Don’t Let The Bastards Get You Down.” What?! Favorites playing a favorite, and making it their own. Those are the great musical moments you often get at shows like these. LOVED it. 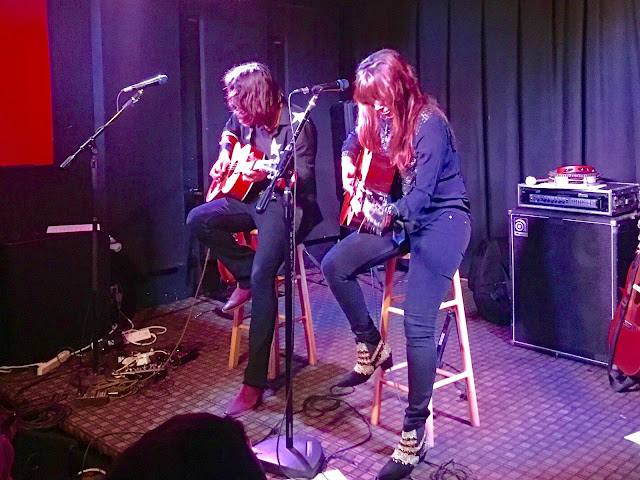 “Hard Times” was a bluesy number that you’ll hear on the next TLI record, and “1968” was their “Revolutionary anthem” that really showcased Paz’s voice – and hotness – when she sang about how making revolution makes you feel like making love, which of course it does. We joined in on this one, chanting “People, People have the power!” under her lyrics, and in that moment, it absolutely felt like we did. Because we DO. The Last Internationale have a solo show at the Viper Room on May 25, and you really don’t want to miss that gig.

Rhiannon McGavin is a local teenage poet, and she next got up there and delivered a poem about sexual assault and “Denim Day”, which draws attention to that particular nightmare. It packed a punch, and as Morello correctly assessed, “I think we’re in good hands with the Millenials.” At least this one. 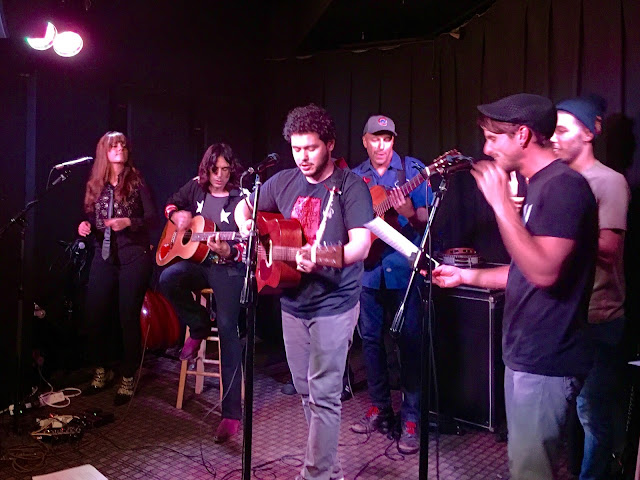 The All Star Jam is always my favorite at these shows, and everyone crammed back up on stage to belt out Leadbelly’s “Bourgeois Blues”, which was great, and then we convinced their asses that we’d enjoy hearing some more. We got more, as Samara took over singing lead in his British accent for The Clash’s “Should I Stay Or Should I Go?” This one got pretty rowdy, and shirts were indeed wet. 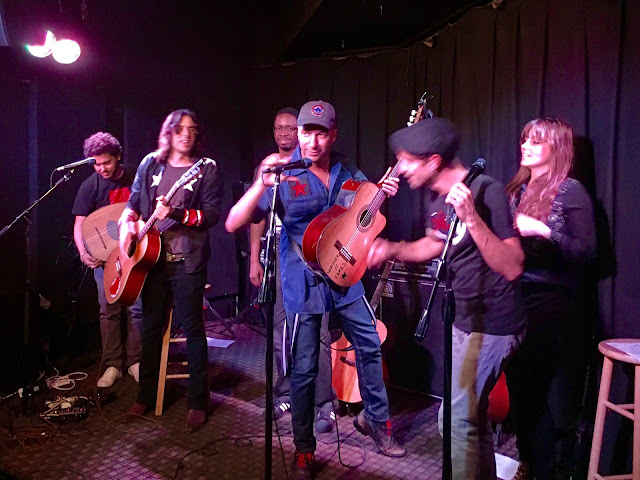 The ironic champagne bucket was passed around the room for the grateful audience to kick in more for PATH, and as that was happening, Morello told about how it had been his turn to speak to to the little kids at his son’s school for May Day. He shared his “revolutionary rhetoric for toddlers” to the kids, telling them how the miners in Marseilles, Illinois formed a Union and fought for the eight hour work day, because they never saw their children and they just wanted to PLAY! This was the real story of May Day, and this IS the real story of “This Land Is Your Land”, which was, as ever, the night’s finale. 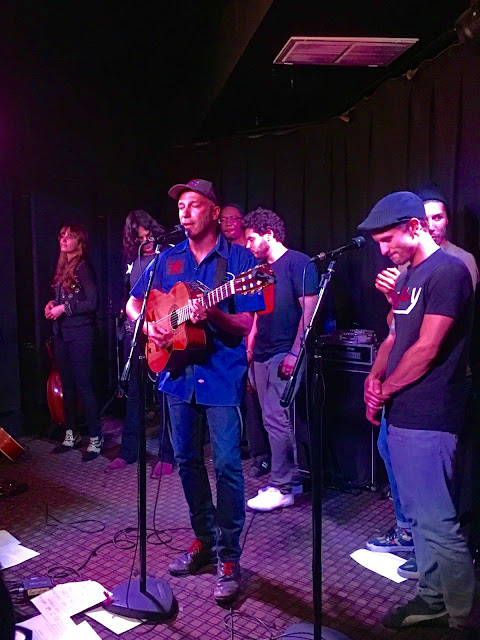 As Morello explained how the song would go down (I’m anarchist, but I’m rule based, like Darth Vader” … I leave ‘motherfucker’ out when I talk to the five year olds, but I think it in my head.”), and how we were all in it together, it really felt true. You felt that everyone in there had been revolutionized, and that they really would take it out into the world with them, and STAND UP against any social injustice that rears its ugly heads before them. This alternative National Anthem is the real deal, and really the main thing to remember going forward. This land is OUR land. It was made for you AND me. Everyone jumped together in agreement and solidarity, and were reminded once again by Morello that we must “Take it easy, but take it!” Yeah. 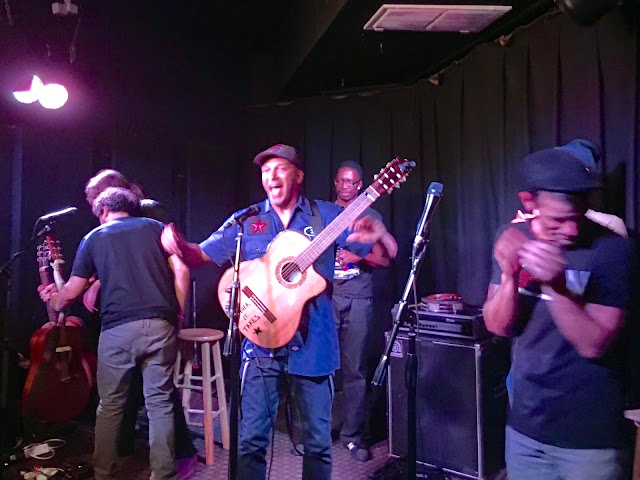 The crowed exploded out into the night, gasping for cool air and a breeze to dry the shirts. I headed for home, feeling inspired, and totally sure that I’d made the right choice in the night’s entertainment. Because everyone was happy, everyone was ALIVE, and everyone could feel the promise of better days ahead, because we’re in it together. And People have the power. Never forget that.

See you next time!