There has been extra fun stuff to do in town ever since I got back, and I was extra excited to get the call that my friend Tom Morello was firing up an August edition of Firebrand Fridays at Genghis Cohen. These are the musical jamborees that Morello puts together with all his friends from a wide range of musical genres and they throw a downright hootenanny, with ALL proceeds going to PATH (People Assisting The Homeless) here in L.A.

I saw Mary Morello first thing upon entering, and we hugged and she said, “We’re the old timers!” I love that from her as she is Tom’s fantastic 91-year-old mother, but she’s right. We’ve been there for all these shows, from when Tom was first doing his solo songs in coffee houses. You just can’t help but want to be a part of it, so you jump at every chance to behold one of these great and powerful shows. We spoke for a bit more, then Mary said, “I have to go be with my kid,” and off she went to her spot right down front to cheer on her son and his friends.

After the tiny room could not fit one more body, Tom came out to welcome everyone to “the best $10 show in L.A.!” Total understatement. Morello introduced his Freedom Fighter Orchestra band mate, Dave Gibbs (aka Kid Lightning), to play a few songs for us on the eve of his 50th birthday (thus Tom dubbed him the Kid Middle Aged Lightning). I had missed hearing the beautiful voice of Gibbs, and he  delivered an old favorite “Barely Out of Tuesday” and “another mournful ballad in G minor” before destroying the room with an acoustic, slow, sweetest version ever of “Straight Outta Compton.” Ha! It was classic and the best. I love Dave Gibbs.

“You’ve already got your $10 worth,” Morello said, “so it’s a gravy laced victory lap for you from here on out!” He introduced his “Consigliere” also from the Freedom Fighter Orchestra, Carl Restivo. Restivo can pretty much sing and play anything, and is always the one Morello turns to for charts or lyrics or anything musical. He’s a human musical encyclopedia, and always a delight to be entertained by.

Restivo was accompanied by a young kid named Jordan, and said, “First we’re going to play a love song, then we’ll politically charge it up.” Awesome. There was a whoa-oh sing-along for us on that one that I didn’t catch the name of, but it was lovely. Then, as Restivo is a major Frank Zappa fan (“And Frank would have plenty to say about now”), next we got “Son Of Orange County” and “More To Say,” both off of Zappa’s Roxy And Elsewhere album. Greatness. Restivo then brought up another friend, Eliot Pasentino, to join him for an ultra-spirited take on “Rocking in The Free World,” that ruled. 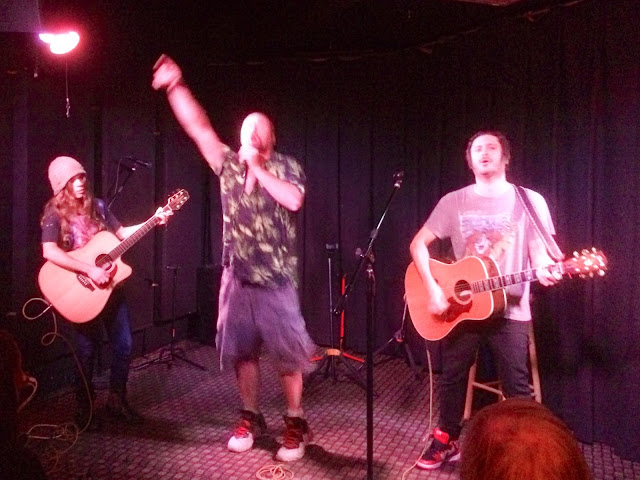 Morello himself played for us next, opening up with what he called, “An old Negro spiritual,” but was in fact an acoustic, “Guerilla Radio” from his Rage Against the Machine catalog. His harmonica filled in for the electric guitar solo that is customary, and everyone simply loved it, screaming along with “All HELL can’t stop us now!” until we were hoarse.

He told a story about how the Morellos literally single-handedly integrated his hometown of Libertyville, Illinois as the only African-American kid in town. “When you come from where I come from,” he said, “there’s only one way out and one way back.” Then he launched into a new song, “Interstate 80.” He stomped on his box, wailed on his harmonica, and brought us all along with him down that highway. After that firestorm, Morello took a big sip from his glass and said, “It’s not Firebrand Fridays without Daddy’s apple juice.”

Sated, he introduced the next one by saying that it’s Bruce Springsteen’s favorite Nightwatchman song, and delivered “Branding Iron” to a totally stone-silent room. Powerful stuff.

“It’s the 100 year Anniversary of the death of Joe Hill,” Morello taught us. “He was the original Nighwatchman, and they killed him for it … but the future is unwritten.” Then he went into “House Gone up in Flames.”

Next, as it’s the 10th Anniversary of awful Katrina (a CRIME) where we spent time working with local musicians to clean up their homes, he played for them, “Midnight in the City of Destruction.” It was haunting and perfect. The room was again pin-drop quiet. For Morello’s last song, he brought up Jake Clemons, his bandmate the past couple years in Springsteen’s E Street Band, and the son of E Street legend, Clarence. “It Begins Tonight” may never have sounded better than when lit up with the finesse of Clemons’ saxophone. Jake laid into a solo that knocked all our socks off, and all you could hear afterwards was “Wow!” Truly, WOW. 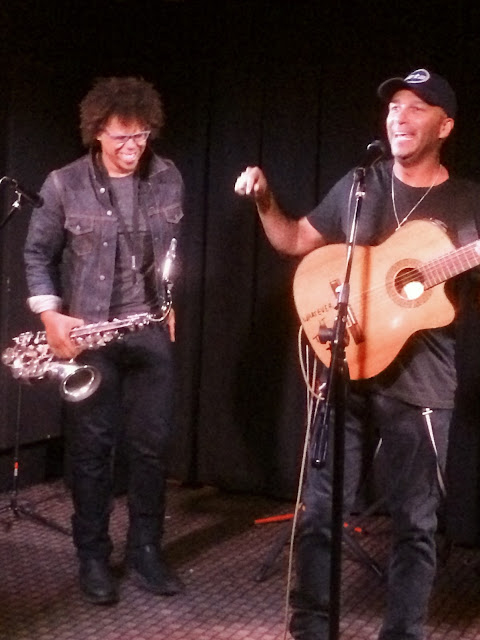 Firebrand is also the name of Morello’s record label, and next up was one of Firebrand’s artists, Lia Rose from Built For The Sea. I’d never heard her play before, and this was another moment that called for a “WOW.” She is something else.

She opened with a love song — “Because what’s the point of all of this if we don’t keep love alive?” — and gave us the gorgeous “Secret Stories.” Her voice is just sublime. Her band has a new EP coming out soon on Firebrand and she played one from that, appropriately about the homeless, called “Ghosts and Images.” It featured ghosty “Ooohs” and she had the whole crowd clinging to every word. As Rose didn’t have the rest of her band with her, she pulled them up on her phone, and sang over their track, “You’re a Dead Man.” Her voice opened up full throttle, and brought to mind Portishead or Massive Attack, but more radical and with more of a point. It was so, so good … another wonderful Firebrand Friday discovery.

Jake Clemons was back up next to play his own songs on the acoustic guitar. He mentioned that Genghis Cohen was the first place he ever played solo five years ago, and said tonight’s audience was way bigger than when he played there, but way smaller than his audiences the past couple years with Bruce. He seemed a little shy, but let his songs speak for him.

“Love’ll Never Change” had us stomping and clapping along, right into his next song about a train, and on into the next one about more good love. The people were all the way into it, and Clemons got a whole bunch of new fans on this night. He spoke of how it was so nice to have Morello in E Street Band, as the other guys were always his uncles, it was nice to have a brother along.

He closed with “Embracing The Light,” which is pretty much exactly what we were all doing at this point.

The best part of Firebrand Friday shows are always the finale All-Star jamborees, and tonight was no different. Everyone (plus Jason Heath!) came back up to sling some “radical political hair metal, our flag would be a spandex hammer and sickle.” This came in the form of Twisted Sister’s “We’re Not Gonna Take It.” It was classic to look around and see Mary Morello and  friends’ parents with arms up, shouting along and getting all their frustrations out together. It was very rock and roll. 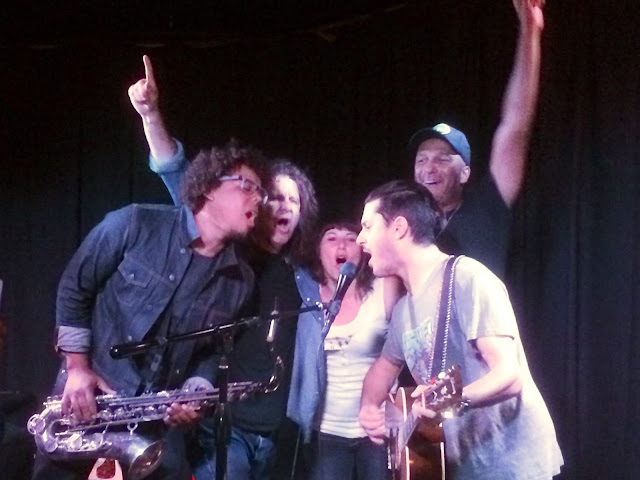 Lia Rose took lead on the next one, a beautiful ballad, “Sleep the Pain Away,” with all the night’s featured gentlemen as her backup singers. It, and she, were perfect. I loved every note.

“You paid ten stupid dollars for this show, perk up,” Morello demanded, and boy, did everyone snap to! Not that they needed to, but the wisdom for these shows is that it can always be taken up another notch. When Morello played the opening notes to “The Road I Must Travel,” people knew it and shouted for it. This Nightwatchman sing-along is now a crowd favorite. Each and every person followed the instructions to “Sing along like Pirates! In Solidarity!” Again, we sang ourselves hoarse.

“Now is when we pass the ironic champagne bucket,” said Morello as the time had come for people to pony up more for PATH if they could, and if they felt it was worth more than $10. I saw piles of $20s in there as the bucket went by, so you know people are taking these nights — and the need out there among our fellow men and women — seriously, and loosened their wallets. Morello and Clemons played some slow jams during this process, with Morello shouting, “Hurt ’em with the love power, Jake,” which he effectively did. 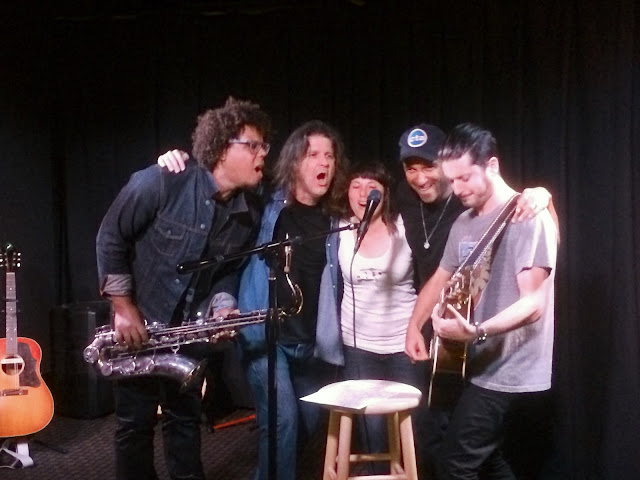 We got the E Street jam “Pay Me My Money Down” next, with Clemons throwing down his “Superfun sax shit,” delighting the obvious E Street superfans in the room (superfans who still wear their Born in the USA shirts) and the rest of us alike. Morello and Clemons took off into the crowd for an instrumental conga line, and everyone just lost it.

“These are Firebrand Fridays! Take it easy, but take it!” Morello shouted, before adding that Clemons was going to bring us home with a musical prayer. Clemons then delivered the most beautiful saxophone instrumental you’ve ever heard, leaving I’m pretty sure exactly zero dry eyes in the house. The other musicians stood behind him with heads bowed and hands clasped in front of them as they listened to their friend play what sounded like he was communicating with his late father. It was both heavy and stunningly gorgeous, and as the last breathy note faded out, Morello put his arm around Clemons with brotherly love, and they all walked off to ears-still-ringing applause.

Please join us old timers next time … you never know what you will discover, but you do know you will have contributed to something great. 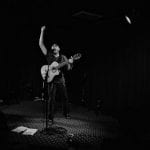 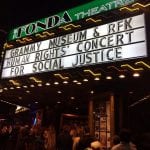 The Concert For Social Justice – Live From Hollywood!