Here at No Depression we hear all the time about music being passed on from generation to generation, but there’s something really exciting about actually watching this happen. This is part of the wonderful story behind Smithsonian Folkways‘ album, Old Man Below, from The Dust Busters with John Cohen. It’s a story that started 50 years ago when a young man from Queens traveled South to Hazard, Kentucky and met a local construction worker whose other-worldly singing would go on to form the archetype of Southern old-time music. When John Cohen met Roscoe Holcomb in that little Kentucky town, he was fresh off the first album from his band the New Lost City Ramblers, which he’d formed with friends Mike Seeger and Tom Paley. The Ramblers were informed by the old 78s uncovered by iconoclastic genius Harry Smith in his Anthology of American Folk Music. And unlike the Kingston Trio, the Ramblers refused to sanitize this music, playing with a reverence that gradually turned into simple joy as the group learned how to integrate this regional music into their lives on the national stage. Gradually, this unexplainable love for the eerie depths of American folk music created new communities across the US and the world and spread across generations. But the key moment in all of this was that meeting with Roscoe Holcomb, and the subsequent trips, as Cohen moved from imitating the sounds he heard on old 78s to learning directly from someone of another generation, another time, soaking up memories and stories and jokes and songs in Holcomb’s home.

Flash forward to 2008, and the story repeats itself. Three young men from Brooklyn meet John Cohen, a fellow New Yorker so changed by his lifetime of dedication to Southern old-time music that he has become the kind of elder master musician he used to trek through the Appalachian mountains to find. Like John, the Dust Busters first came about from a mutual love of the old 78 recordings of American folk music. They’re avid 78 collectors, and singer/guitar/banjo player Eli Smith runs a radio show in Brooklyn in order to play his latest finds. Fiddler/singer Craig Judelman grew up in Seattle, but grew up closely tied to klezmer and old-time music communities. Banjo player/guitarist/singer Walker Shepard is the enigma of the group, singing with a voice impossibly old, at times indistinguishable from Cohen’s voice, and so closely informed by the Southern inflections of the old 78s that you start to feel you’re listening to an old recording. But while the Dust Busters came out of a love for 78s, they were nurtured in real communities of old-time music makers, hanging out with Peter Stampfel and Alice Gerrard, and learning fiddle tunes at old-time campouts and jam circles. Like Cohen, they adapted their lives to the music, and this is why their music sounds so compelling. Like their friend and compatriot, Frank Fairfield (who guests on this album on an unsual version of Arkansas Traveller), they tap into the visceral rawness of the music. On their new album Old Man Below (this is their third album and second with John Cohen), the Dust Busters sound remarkably like the early New Lost City Ramblers, tumbling over each other in their excitement to get the song out, and filling their albums with up to 20 different songs, all sourced from rare finds or meetings.

We are proud to present an Exclusive Listen to the Dust Busters with John Cohen album, Old Man Below. It’ll be up for a week until the release date on August 14, so rev up your computers and grab your headphones. If you like the music, pick it up at your local record store or online! 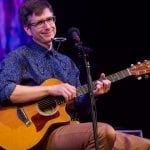