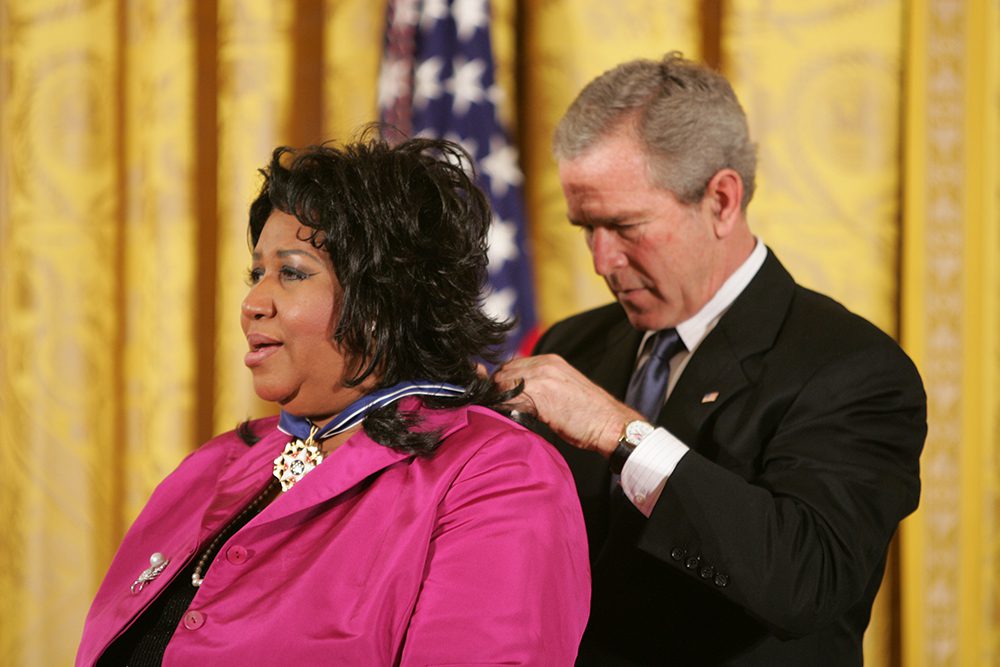 During this year’s State of the Union Address, on the night before the U.S. Senate would vote on whether to remove Donald Trump from office after being impeached, the president paused to recognize conservative talk radio host Rush Limbaugh sitting in the gallery. Breaking with tradition, something he often does, he allowed the First Lady to award Limbaugh with the Presidential Medal of Freedom. As she clasped the medal over his neck, the president had this to say:

“Rush Limbaugh, thank you for your decades of tireless devotion to our country. Rush, in recognition of all that you have done for our nation, the millions of people a day that you speak to and inspire, and all of the incredible work that you have done for charity, I am proud to announce tonight that you will be receiving our country’s highest civilian honor, the Presidential Medal of Freedom.” (The Hill)

As the Republican party members stood to give Limbaugh a standing ovation and cheers, with some shedding tears as it was recently learned he is suffering from terminal cancer, I grabbed my iPhone and quickly searched for exactly what the Presidential Medal of Freedom is.

“Established by President John F. Kennedy in 1963, this prestigious award is the Nation’s highest civilian honor. It is awarded by the President of the United States to individuals who have made exceptional contributions to the security or national interests of America, to world peace, or to cultural or other significant public or private endeavors.” (The White House)

Curious as to which men and women have in the past been acknowledged for exceptional contributions, I went to the best source of information that exists on the internet: Wikipedia.

I was drawn to one of the 17 areas of contribution the medal honors: the arts, and specifically music. President John F. Kennedy gave the first three medals to Marian Anderson, Pablo Casals, and Rudolf Serkin. Nixon gave one to Duke Ellington. Reagan handed out 10, with one going to “Tennessee” Ernie Ford. Bush One acknowledged Ella Fitzgerald and Bush Two added Aretha Franklin and B.B. King.

Barack Obama handed out 13 medals, including Stevie Wonder, Bob Dylan, Bruce Springsteen, and Loretta Lynn, a strident supporter of the man who would eventually succeed him. So far, the only musician to receive a medal from Trump was the late Elvis Presley. One can easily imagine Ted Nugent and Kid Rock waiting in the wings.

Rush Limbaugh began his radio career in 1971 as “Bachelor Jeff” Christie, and it wasn’t until 1983 that he began using his real name. On Aug. 5, 1987, the Federal Communications Commission under Reagan repealed The Fairness Doctrine, a rule that required radio stations provide free airtime for responses to any controversial opinions that were broadcast. ABC hired conservative Limbaugh to New York’s WABC, and the show went into syndication throughout the country.

In December 1990, New York Times columnist Lewis Grossberger ran a profile of Limbaugh and described him like this: “His subject is politics. His stance: conservative. His persona: comic blowhard. His style: a schizoid spritz, bouncing between earnest lecturer and political vaudevillian.” By this point, only two years since becoming a national broadcaster, Limbaugh had more listeners than any other talk-show host and his syndicate of radio stations was growing weekly.

In the past 30 years it would be impossible not to know who the man is, but I am not someone who has tuned into his show. His more outlandish and controversial endeavors have been well-publicized and some of his quotes are enshrined in modern conservatism.

Business Insider gave a brief rundown of Limbaugh’s exceptional contributions to the security or national interests of America, world peace, and culture, a few of which I’ll share with you:

— On the topic of slavery: “It’s preposterous that Caucasians are blamed for slavery when they’ve done more to end it than any other race,” he said in 2013, adding that “if any race of people should not have guilt about slavery, it’s Caucasians.”

— He called a Georgetown Law student a “slut” and a “prostitute” in 2012 when she argued before Congress for contraceptive coverage under the Affordable Care Act.

— Commenting on a video actor Michael J. Fox appeared in, Limbaugh said in 2006, “Either he didn’t take his medication, or he’s acting.” Fox has Parkinson’s disease.

— In 1988 he called Amy Carter “the most unattractive presidential daughter in the history of the country,” and a few years later joked that Chelsea Clinton was the “White House dog.”

— One of his favorite jokes is that Hillary Clinton castrates men and has a “testicle lockbox.” In 2009 he said that she didn’t become a US Marine because “they didn’t have uniforms or boots big enough to fit that butt and those ankles.”

Does any of this remind you of somebody else? It seems awful close in language and viewpoint to one of the only three presidents to be impeached in the history of our country. And when Limbaugh received his medal, let’s remember he was cheered and received a standing ovation from a large crowd of mostly older white men. Just sayin’.

So I suppose we should congratulate Rush Limbaugh on his accomplishments in the areas of racial equality and justice, women’s rights, feminism, Native Americans, and the disabled. He stands shoulder to shoulder to another man who received his medal in 2002: Bill Cosby.

But let me not drift too far away from the topic of music. Frank Sinatra was also a medal winner, and this signature song of his wraps it all up in a neat bow.