Don’t get me wrong, I understand why the ACM has the major emphasis on young performers. And even if we want to be all snotty about profits and charts and radio play, it’s important for us country fans to remember that time marches on. Just look at the portraits of the various “decades” of country performers in and around the Grand Ole Opry, and you’ll know what I mean.

But still, I’m a little bitter.

Candidly, I wondered if Scruggs — who won four Grammy Awards and revolutionized his brand of country music — would be remembered, even after I read that he would. That doubt deepened when I flipped on the show and watched Carrie Underwood’s uber-hot performance of “Good Girl” – the opening of the show and the kick off of a calvacade celebrating youth (an actress from the TV show “Two Broke Girls” is a presenter? Really?).

But sure enough hosts Reba McEntire and Blake Shelton said all the right things about the bluegrass legend followed by a somewhat tepid standing ovation from the audience.

You know what the true tribute was? Steve Martin, who learned to play banjo from John McEuen (speaking of legends that are ignored by the industry) joined Rascal Flatts in performing the song “Banjo.” Wearing a classic white suit and an earnest expression, Martin stayed in the back of the band, letting the Flatts’ band get all the face time. Beyond classy, Steve.

I was talking to a household-name Texas performer not long ago — it’s not important who — and he mentioned the tragedy that is the absence of Willie Nelson, Ricky Skaggs, the Avett Brothers, Vince Gill, Emmylou Harris, and other brilliant performers on such shows.

Sure, fans still have a lot to do with a musician’s success — the fan-voted ACM is supposed to underscore that — but we all know it’s the record companies that have get-out-the-vote plans that would do any political party proud.

Now the ACM would respond that bluegrass and some other non-mainstream artists do receive awards and recognition. Yes, they’re off-camera winners.

Vince Gill received the Career Achievement Award for advancing the popularity and acceptance of country music through many endeavors.

Let’s not even talk about the music legends who were brought on as presenters — KISS (Who I have interviewed and really like, personally and musically, but again, really? Glen Campbell, Marty Stuart, Rodney Crowell, Lyle Lovett, Steve Earle, Ray Benson, Charlie Daniels — none of them were available?)

I am always glad that I watch these shows, if just to remind me of how much I respect the “non-mainstream” performers that truly play their music for the love of it and for the “No Depression” group — staff and volunteers — that offer such a tremendous outlet to introduce readers to such music. 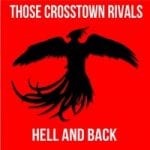 Those Crosstown Rivals take listeners to Hell and Back Scott H. Biram unleashes Nothin’ But Blood on the world