Delbert McClinton & Dick50 – If You Label Me You Negate Me

I recently saw Delbert McClinton at Gruene Hall.  It was a raucous, sweltering night full of great music and cold beer.  Afterward I sat at my computer, trying to describe what made it such a special treat, and I started thinking about good music.  What makes Delbert’s music so enjoyable, so special?  I’m lucky to live in Texas, where good music is so accessible.  We have a generous crop of great musicians who live and play right here in Texas, and artists from other parts of the globe, like Tennessee, always make a point of putting Texas on their tour schedules.  Consequently, we get a continuous infusion of visiting talent.  These days, the Texas music scene and the Americana music genre is thriving.

What is Americana music?  Wikipedia says, “Americana is an amalgam of roots musics formed by the confluence of the shared and varied traditions that make up the American musical ethos; specifically those sounds that are merged from folk, country, blues, rhythm and blues, rock and roll and other external influential styles.”  It then goes on to list examples of Americana artists ranging from Bruce Springsteen to Willie Nelson, Lucinda Williams to Kelly Willis.  I suppose that is as good a definition is any.  To me, Americana is simply Texas music – no formula, no categorization.  Instrumentation and sentiment are fluid.

It started with folks like Johnny Cash and Elvis Presley, and was continued by others without being called Americana.  In the 70’s and 80’s, as rock and country became increasingly separate sounds, driven almost exclusively by record industry executives, artists that refused to chose sides lost their industry homes.  Listeners were forced to choose between George Strait on the one channel and Wham on the other, with a rare cross-over venture on the adult contemporary channel (“Islands in the Stream” anyone?)

It was sometime in the 90’s when someone finally tried to make a place for artists that didn’t fit the mold and started calling it Americana.  With the birth of the 21st century, the progression of technology revolutionized the music world for independent artists.  With minimal investment an artist could make a CD, book gigs, and peddle their wares to listeners directly.  The need for an industry standard contract and music molded by suits had dissipated.  This has been a giant win-win for artists and listeners alike: artists get to make the music they want to make without industry interference; listeners get the music.

Why recount this brief, layman’s view of Americana’s history?  Because, if it weren’t for artists like Delbert, there would have been no impetus for evolution.

What can I tell you about Delbert that you don’t already know?  He’s a pioneer of the Americana genre: one of the first musicians to make a career defying categorization.  Is he blues, or country, or roots rock?  Yes.  In Delbert’s world, there is no distinction between rock, country and blues.  Does he play an instrument?  Yes, almost all of them, although he’s best known for his harmonica technique.  He’s been around long enough to have taught John Lennon that famous harmonica technique, just in time for The Beatles to record Love Me Do.  He’s a Grammy award winning musician: once for a duet with Bonnie Raitt, the other for Best Contemporary Blues Album.  He’s a prolific songwriter and talented musician who’s every appearance seems to be cause for a party of epic proportions.

One of his great talents as a musician and band leader is his ability to find and forge ties with other hugely talented musicians.  Dick50, his backing band, is a KILLER group of insanely talented musicians.  The core of the group starts with Kevin McKendree.  Kevin plays keys, but when he picks up a guitar, you would never know he was foremost a keyboardist.  In a world full of musicians who are all attitude and no craft, Kevin McKendree is the real deal, punctuating music with perfect intuition, and ripping through boogie-woogie piano like nobody I’ve ever heard.  Lynn Williams provides complex yet metronome like beats on drums, and Spencer Campbell provides the low notes.  On this run, the legendary Gary Nicholson sat in on lead guitar, accentuating a band that was already a force of nature.

Seeing Delbert McClinton at Gruene Hall was akin to a visiting charismatic preacher delivering an on-your-feet sermon to a group of beer-drinking sinners at the little wooden church in the center of town.  It was 99 degrees at 9:00 on a Friday night in downtown Gruene, and 115 inside Gruene Hall.  Everyone was either on their feet crowding the stage, or standing on the benches around the perimeter of the room.  As Delbert moved through his set list, full of classics like Giving It Up For Your Love, Every Time I Roll the Dice, and Shotgun Rider, the crowd sang and swayed.  The entire spectrum of music lover, from The Finger Guy to The Drunk Dancing Girl drank their fill of the music gospel pouring forth from Delbert et al.  At the end of the night, everyone pouring out of The Hall that night had been bathed in the baptizing waters of beer and sweat, having heard The Good Word from a musical evangelist of the first order.

For me, it was a revelation – the realization that one of the pioneers of the music I love was standing right in front of me, preaching The Gospel of Texas Music.  I wonder how many of us truly appreciate the salvation and redemption we have received, thanks to the musicians like Delbert?

Dear Delbert, the chains of conformity have been broken, we have been delivered from the mainstream.  For this salvation, we offer up thanks for your integrity and faith during the tribulations of the 70’s, 80’s and 90’s.  Amen. 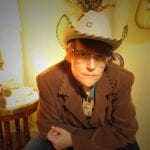