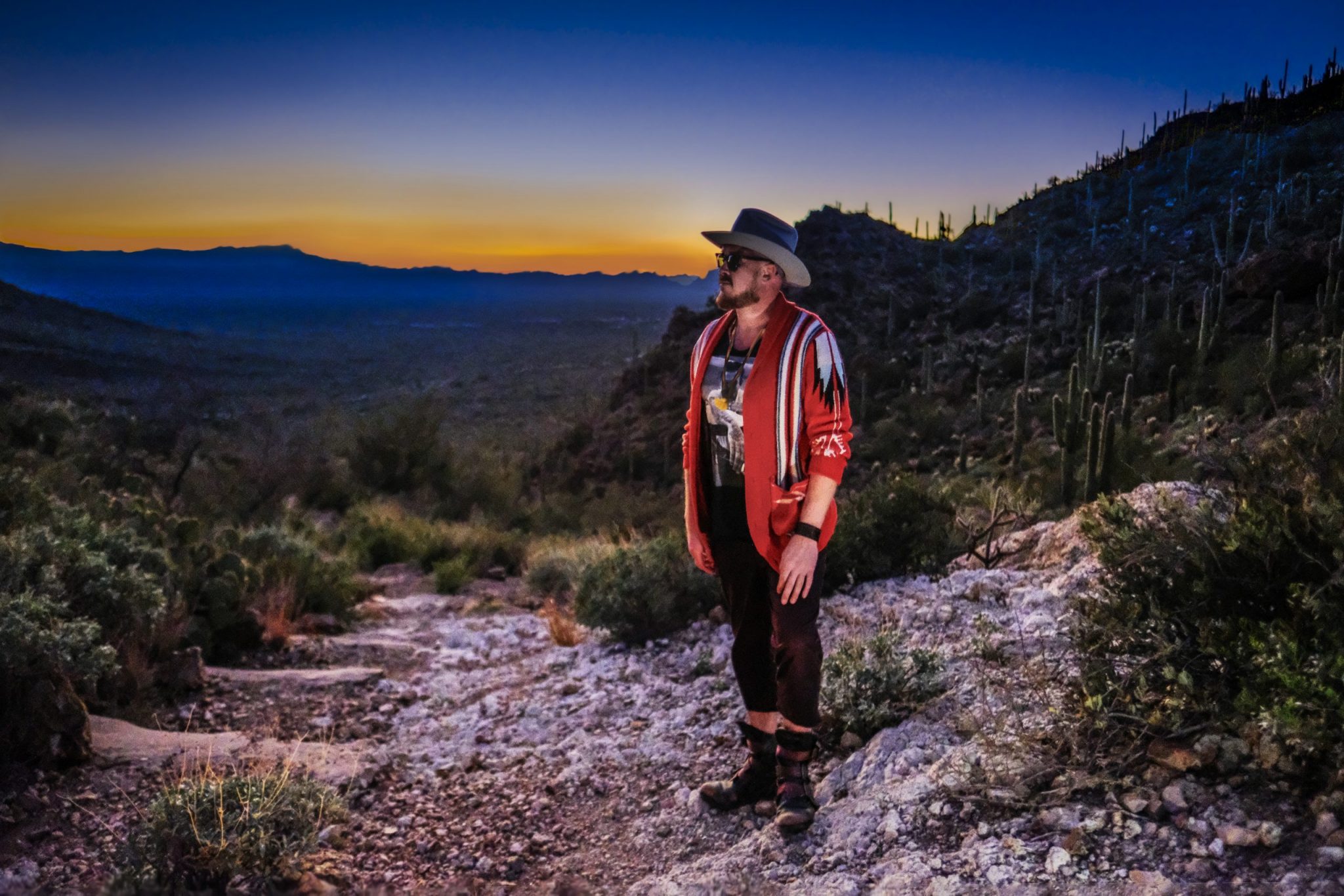 John Trudell, the legendary Native American poet, activist, and musician, likened Elvis Presley to the “Baby boom Che” in his poem about the rock-and-roll icon. Elvis “showed us an out,” Trudell writes, from the “psychotic pall.” He showed “everyboyman and everygirlwoman there’s something good in feeling good.”

Trudell’s poem would have readers believe that Elvis was a counteractive force against the threat of nuclear annihilation, genocide, and environmental destruction. It also celebrates the redemptive possibilities of art with ambition to change the world.

Singer-songwriter David Huckfelt likewise celebrates both the joy and the sociopolitical power of art, embracing a belief, as he puts it, “that music should expand the space of the room where you sit, but at the same time be so powerful that it nails you to the wall.”

“We are spiritual and material beings,” he says, “And the best music lives between those two worlds.” 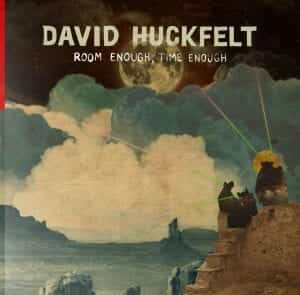 It is that mysterious suspension between the spiritual plane and the land of the living, the myth of the American revolution and the brutality of its founding, and Native tradition and Americana folklore that Huckfelt explores on his extraordinary new record, Room Enough, Time Enough, out Feb. 26. Among the many influences he cites is his late friend and collaborator, John Trudell.

Room Enough, Time Enough does not have a “concept,” Huckfelt says during our discussion, but a “philosophy.” It is a “tribute” to Native history, politics, and spirituality that integrates the “vocabulary of American folk music” with the rich vision of Native life — a vision that Huckfelt asserts that the American mainstream, to its own detriment, has neglected and even dismissed.

Operating according to the hospitable promise of the title, Huckfelt integrates his own original songs with public domain material from the American folk songbook and songs from the Indigenous tradition that, in his words, “are sidelined.” “They fit well together,” Huckfelt says. “I want it to feel like one thing, and erase some of the boundaries of genres, and let people encounter it as something to help them ask questions.”

With its emphasis on Native voices, Room Enough, Time Enough is a “common ground record,” to use the phrase that Huckfelt claims captures his original intention. The record falls into the long line of collaborations between Native music and country music — two distinctly American artforms that, as Huckfelt explains, “have often blended together in weird but beautiful ways.” Johnny Cash’s classic record, Bitter Tears: Ballads of the American Indian, and Willie Nelson’s consistent support of Native causes are two examples, among many, that illustrate that blend.

In a moment of extreme sociopolitical division, recrudescent racism, xenophobia, and white supremacy, Room Enough, Time Enough aims to amplify the possibility of harmony and healing, but not without a full and honest accounting of the systemic crimes and abuses against Natives that necessitate confession and recompense.

A project like Huckfelt’s would have no integrity or authenticity without the creativity and participation of Natives themselves. Every original song features the lyrics of co-writer Keith Secola, and there is a prolific range of guest contributions from other Native singers and instrumentalists, most notably Quiltman, Pieta Brown, and Jackie Bird. The stunning vocals of Quiltman, who Huckfelt appraises as “one of America’s best and most underappreciated singers,” most especially capture how American culture has suffered for its refusal to break out of its ethnocentric insulation. 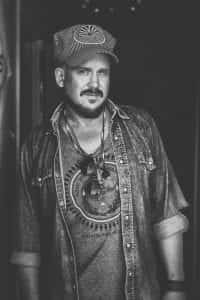 “I don’t think we’ve done a very good job of listening,” Huckfelt says when I ask him about the presence of Indigenous art and ideas in the American mainstream, then adds, “My biggest goal with the record was to make space so that I was not the center of it. What happens often is that with a lack of intimacy with Native music, or if we don’t understand it, we can stereotype it and then make it irrelevant. The truth is that Indigenous music has influenced every form of American music — folk, country, blues, jazz. I feel like it gets lip service, but it doesn’t get intimacy. All of these songs and recordings come out of long friendships and trust that we’ve taken time to build.”

Huckfelt seems to hope that the record will initiate a transformation in the mindset of his listeners similar to the one he experienced with his introduction to Native American culture and philosophy, a “gift” that the American Indian Movement gave inhabitants of Northern Minnesota, where he has lived since 2003. Meeting Native activists and musicians there reframed his thinking at a time when he was examining his own spirituality.

“I’m a former theology student,” Huckfelt says, “and I spent time trying on the Western worldview that Christianity presents. For all the compassion that you can sometimes find there, there are also glaring omissions when it comes to seeing the spirit world as part of our daily lives, and seeing the planet as something we are a part of rather than something we are separate from. That’s a big shift.”

The shift gathered speed and force when Huckfelt met Trudell in 2005. The activist and poet was speaking at a Free Leonard Peltier rally on the Pine Ridge Reservation in South Dakota one day as Huckfelt was delivering winter supplies. They would cross paths again at National Book Award-winning novelist Louise Erdrich’s bookstore in Minneapolis, Birchbark Books & Native Arts, and after forming a friendship, eventually collaborate on the 2014 song, “Time Dreams.”

Huckfelt explains that Trudell helped him “take his own worldview off the throne” and recognize that “most of our modern problems derive from disconnection.” Huckfelt gives a succinct but thorough summary of the fractures that debilitate Western society, particularly American culture: “We see ourselves as separate from the earth. We see God as something separate living up in the sky. Those views have had pretty ugly consequences, particularly for Native people. America has a sickness in its spirituality, because of what we’ve shoved aside in the name of greed. We even separate from our own nature. Christianity tells you that there is something wrong with you the second you are born, like it was a crime. John Trudell always told me that this is ‘not the truth about your spirit. You’re part of the earth.’

“Every time that worldview is applied,” Huckfelt argues, “It creates beautiful results.”

Trudell also warned and instructed Huckfelt that “the institutions of America will not protect us. It will always be the art that is our guide.”

According to the Native “philosophy of humility,” as Huckfelt calls it, he facilitated the creation of Room Enough, Time Enough with the aspiration to meet Trudell’s standard of insightful art.

There are certainly sociopolitical implications to such a project, but Huckfelt is reticent to call himself an activist, preferring to honor with that title the “people on the frontlines in Northern Minnesota,” where Huckfelt is from and resides, protesting the construction of new pipelines and dedicating their lives to the preservation of the planet.

Huckfelt does have the ambition to create “music for the sake of the music,” and also songs that “have a functional role in elevating important issues.”

As far as the former is concerned, Room Enough, Time Enough is a moving collection of songs that manages to amplify the edifying traditions of American and Native folk without sacrificing originality or innovation.

Doubling as homage and enhancement of Native cultures, Huckfelt and Secola challenge listeners with their lyrics, and stir them with their eclectic blend of blues, country, folk, and indigenous melodies.

“Better to See the Face” opens the record with a beautiful inquiry into how boundaries diminish with experience. Making brilliant use of metaphysical images, Huckfelt employs his storyteller voice and warm acoustic guitar to invite the listener to follow him:

From there, the album moves through the badlands, plains, and Southwestern desert — sometimes with Huckfelt at the steering wheel, and other times with Secola, Quiltman, or Pieta Brown lending their own navigational precision to visit corners of America’s too often unobserved physical and spiritual geography.

The public domain material, and even a Native-inflected rendition of Patti Smith’s “Ghost Dance,” serve as landmarks for the trek, imbuing the record with the myth of Americana. “Satisfied Mind” opens with Huckfelt’s familiar-sounding country delivery. Greg Brown’s husky baritone takes over, leading the song through a slow burn that suddenly opens into a trumpet line, sounding like the aural depiction of a sunrise.

As much as there is mystery, there is also revelation. Quiltman’s beautiful Native singing on “Book of Life” and “Journey to the Spirit World” amplifies an expression that audiences would recognize as gospel if not for the shackles of Western-Christian convention.

One of Huckfelt’s musical goals, he explained, was to “open up” record making at a time when “almost everyone else is stripping down.” Room Enough, Time Enough makes room for an assortment of traditional instruments, including fiddles, banjos, and the trumpet, along with a variety of guest vocalists. The collaborations all sound natural, exemplifying Huckfelt’s search and fertilization of “common ground.”

The album would benefit from more range in tempo, considering that the two most upbeat numbers are its final two tracks, but this is a minor complaint. “Calling Thunderbird Blues,” the last song, is particularly ferocious. Secola gives a fiery speech over the backing of roadhouse blues. Quiltman sings in the far distance, and Secola damns the American theft of Native land, demands stewardship of the earth, and commands, “Everything has a spirit. Honor that.”

“Only by the hands of the greedy does the earth require a fee,” Secola declares. He also offers the following interpretation: “The silence in music is for the sorrow of the earth.”

The line should prompt an immediate replaying of Room Enough, Time Enough, leading to delight in the beauty of the songs, and mourning in the moments that separate them. 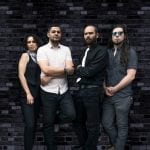