About a minute into Hayes Carll‘s first song “Chances Are” a big cheer erupted from the crowd. No, the crowd wasn’t cheering for the protagonist in this heartfelt ballad. They were celebrating the fact that the Boston Bruins had just beaten the Montreal Canadians in double overtime. For a second there I thought I was back in Canada, but then I remembered that the Leafs never make the playoffs. I hope the Texans on the stage weren’t confused either. Welcome to Boston!

Carll headlined the sold out gig on Saturday, April 23, at the Brighton Music Hall in Boston, playing all but one song from his tremendous 2011 album KMAG YOYO (and Other American Stories)

, and other great tunes from his back catalog. (The one song he didn’t play from the new album was a Christmas song, which really didn’t fit on the day before Easter).

After the warm up ballad, Carll and his band dug into the country rock with “Hard Out Here” and “It’s a Shame,” along with “Drunken Poet’s Dream,” which he co-wrote with Ray Wylie Hubbard. By the time he got to the title track to his new album, “KMAG YOYO,” which to me sounds like “Subterranean Homesick Blues” on meth, the crowd was rowdy and dancing up a storm.

A few down-tempo tracks later, including my favorite song “Beaumont,” Carll introduced a new song that he co-wrote with Bobby Bare Jr., “One Bed, Two Girls and Three Bottles of Wine.” This song, along with the venerable “She Left Me for Jesus,” which is a quality Easter song, is one of the reasons why I love Hayes Carll’s music. There is a long tradition of humor in country music, and so few songwriters use humor in their songs these days, and even fewer use it well. The only other modern humor-using country-ish songwriters that immediately come to mind are are Todd Snider and Corb Lund, both of whom have guest vocals on the song “Bottle in My Hand.” A tour with Carll, Snider, and Lund would be worth TSA molestation and domestic air travel.

Early in the set Cary Ann Hearst of first opener Shovels and Rope (see below) joined Carll on stage for the duet “Another Like You.” Hearst actually sings on Carll’s album, and she is exactly what I pictured: sassy, snarky, and wonderful. “Another Like You” reminds me a bit of the John Prine/Iris Dement duet “In Spite of Ourselves,” only Carll’s song is framed as a liberal man and a conservative woman getting drunk and mouthing off while actually being attracted to each other. As Carll said, “At the end of day we are all American. I’m convinced that all it takes is a little bit of alcohol and physical attraction.” Carll recently announced on twitter that he was talking to James Carville and Mary Matalin about being in his video for “Another Like You.” For those of you too young to remember 1992, Carville was chief political strategist for Bill Clinton’s successful presidential campaign, while his girlfriend Matalin was deputy campaign manager for George H.W. Bush’s unsuccessful re-election bid. I can’t find it right now, but I remember reading some brilliant essay written by Carville on how he had to suck up to Mary after the election. They married in October 1993.

Carll’s band was fantastic. First, they were all wearing pearl snap shirts, including Carll. Old school. The pedal steel player switched to a different instrument for every song, including mandolin, Dobro, banjo, and probably some stringed instruments that I’m forgetting. The lead electric guitarist also played lap steel and accordion. During “The Letter” both the lap and pedal steel guitars were going full force. That’s a lot of steel guitars for just $15.

After a short encore, Carll returned to the stage to play the melancholy “Hide Me” solo. The rest of the band slowly ambled onto the stage and by the end of the song the band had fully assembled to kick the audience into next week with a hard rocking cover of George Jones’ “White Lightning.” Shovels and Rope joined them on stage to sing, play, and rock out. Perfect ending to a perfect evening of country-rock! 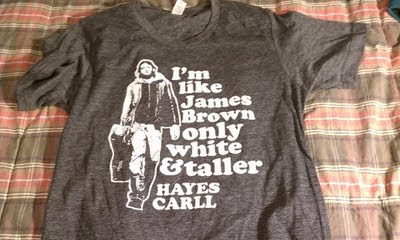 Hayes Carll and Jason Isbell and the 400 Unit alternated as the headlining act for this mini tour, with Carll closing the Boston gig. I’ve seen Isbell and his band live twice before, and had never seen a Carll gig, so this setup worked out perfectly for me. Isbell’s new album Here We Rest

is a slight departure from his previous two solo albums in that it is more of a singer/songwriter type of album as opposed to the blues-based country rock that permeates his previous releases. For example, “Alabama Pines” is an homage or even a love song to his home state, which really shows Isbell’s growth as a songwriter.

Not that we fans haven’t known about Isbell’s musical talents for years. While Isbell and his band mainly played tracks off of his superb new album, he also treated we longtime fans to a few of his older songs from his days with the Drive-By Truckers. I was especially thrilled to hear “Outfit,” one of the best songs in Isbell’s, as well as the Trucker’s, catalogs.

Isbell is also a tremendous guitar player. Before launching into “Never Gonna Change” he shredded on his electric for a few minutes, and broke up “Never Gonna Change” with Hendrix’s “Stone Free.” So killer. And the rest of his band is fantastic as well, switching from the electric instruments to the acoustics and upright bass for the country-folk “Codeine,” and back to the rock and/or roll for The Meters cover “Hey Pocky A-Way” (“New Orleans Music” – Isbell) and a new track “Tour of Duty.” Isbell’s lead guitarists Browan Lollar is not only a bad-ass guitarist, but also an artist. He painted the album art for Here We Rest.

As much as I loved seeing Hayes Carll headline the gig, Isbell’s set left me wanting more. Come back to Boston soon, Jason!

A few weeks ago I messed up my left foot, and I finally saw the doc about it last Wed. She gave me this ridiculous boot to wear which prevents me from bending my toes, and helps my third extensor digitorum longus tendon/third metatarsal heal. So I limp all over the place and have a hard time walking. Why am I telling you this? Because my slow walking and limping made me miss the bus, then miss the subway, and completely miss the first openers Shovels and Rope. Why didn’t I just take a friggin’ cab? Shovels and Rope are husband/wife duo Cary Ann Hearst and Michael Trent. Judging by the ruckus applause they received as I walked in, their set went over very, very well. In fact, I talked to a couple who were there just to see Shovels and Rope, and had never heard of Hayes Carll or Jason Isbell.