Church was brought to The Stone Pony in Asbury Park, NJ the Saturday before Easter with guest sermons by Jonny “Two Bags” Wickersham, Jake Smith aka The White Buffalo, and Chuck Ragan.  Not to practice sacrilege but the night had a religious overtone to it, albeit due to the fact that Easter Sunday was dawning only a few short hours after shows end.  Not to mention the aura of Chuck Ragan, who does resemble Jesus, had he been a rocker and could play a sweet Martin and stomp the stage as the soul rose from the music.  A close to sold out crowd gathered early, as any experienced “show-goer” knows, when there are three high caliber artists on the bill you can be damn sure the festivities are starting early!

First up was Johnny Two Bags of the seminal punk bands, The Cadillac Tramps and US Bombs, however most recently handling lead guitar duties for Social Distortion.  He opened with, “One Foot In The Gutter”, the first single from his debut solo record Salvation Town available on Isotone Records just released April 1, 2014.  Jonny’s 8 song set was really well delivered and did his job of firing up an already amped up Asbury Park crowd.  His set was chock full of songs from the new record which I would definitely recommend picking up for your collection.  Chuck Ragan even joined him and his backing band on harp for a raucous version of “Alone Tonight” also off of Jonny’s new record.  That’s the great thing about Chuck.  He’s spent nearly 30 years as a rock star, in Hot Water Music as well as his solo records and other side projects, and still roams through the crowd at The Stone Pony graciously saying “hello” and taking time to speak with any fans that had the urge to approach him.

The White Buffalo set was just another click up on the evening.  Singer/Songwriter Jake Smith made his point early with what I believe is a new song for the opener.  He was joined on-stage by Matt Lynott on drums and Tommy Andrews on the bass guitar.  Together they played a myriad of songs from the fantastic three full length studio albums, Hogtied Revisited, Once Upon A Time In The West, and (my favorite) Shadows, Grays, And Evil Ways.  If you haven’t heard of these guys, do yourself a favor and get involved with these records, or better yet, get out and see them live.  It’s a foray of Westcoast foot stomping Americana Rock, ever-rocking ballads, and stuttering acoustic guitar solos–Perfect stuff!  Exactly what has gotten his songs featured on tv shows Sons Of Anarchy as well as Californication.  This was my first time seeing them live and I was blown away by both song quality and, more importantly, the delivery.  Chuck Ragan, yet again, joined Jake Smith and company on stage for some vocals and harp before the end of their fifteen song set.

Chuck Ragan and The Camaraderie took the stage shortly after with the first single, “Something Will Catch Fire”, from the stellar new record Till Midnight, on SideOneDummy records released on 3/25.14.  Jon Gaunt’s haunting fiddle swept through The Stone Pony Crowd to set the tone for a diversified setlist for the evening.  We were treated to a plethora of songs from Till Midnight as well as classics, most notably “The Boat” from Chuck’s Los Feliz album.  “Vagabond” was an unnerving highlight for me on this night,  just as it is every time I play it on the record. We were even treated to Springsteen and Bouncing Souls covers, tipping the hat to the NJ representatives. The Camaraderie also included Todd Beene on guitar and pedal steel, Joe Ginsberg on upright and electric bass, and Dave Hidalgo Jr. on the drum throne–the latter drumming for both Suicidal Tendencies as well as Social Distortion as of late.  Chuck is no stranger to Asbury Park or The Stone Pony, having played here several times, as well as the fabled Asbury Lanes both on solo tours and with Hot Water Music.  The classic “Chuck Stomp” could be felt throughout the crowd as the show and energy rose.  It’s almost an extra percussion in and of itself when Chuck gets into his set and his soul exits out through the stomping of his foot.  Here’s a man and a band, for that matter, that feels blessed to be able to take these songs on the road and make a living at it.  There is a connection that can’t be faked between crowd and artist when the show itself becomes almost spiritual.  This was definitely evident from jump start on 4/19/14.  I’m certain that’s what has drawn me to so many shows in my adult and even not-so adult life.  It’s an experience and feeling that is hard to be put into words but can only be felt in the moment, between artist and crowd.  I can only seem to tie it to spirituality which is a fine description for me.  Get out and support Independent Americana music…it may be just what you’ve been missing.

***Please visit Sad Songs Keep The Devil Away at www.ssktda.com for more musings*** 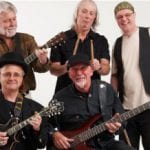 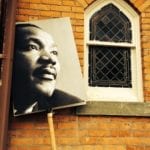