Charles Sawtelle, guitarist for the Boulder, Colorado, bluegrass band Hot Rize, died March 20 of complications from a bone marrow transplant following a battle with leukemia. He was 52. While occasionally joining Hot Rize for reunion concerts, he also performed with his band, Charles Sawtelle & the Whippets, ran a recording studio, and toured with Peter Rowan. Hot Rize, which Tim O’Brien, Pete Wernick, Nick Forster and Sawtelle formed in 1978, released close to a dozen records (counting the ones recorded under the pseudonym Red Knuckles & the Trailblazers) and received a Grammy nomination before entering semi-retirement in 1990….

Early rock ‘n’ roll pioneer Buddy Knox passed away in February at the age of 65. Knox, a native Texan, and his band the Rhythm Orchids (which also included future Nashville production and boardroom giant Jimmy Bowen), had a #1 hit in 1957 with “Party Doll”, which was recorded at Norman Petty’s Clovis, N.M., studio shortly before Buddy Holly ventured there. In the ’60s Knox embarked on a modestly successful solo career playing more country-oriented material. 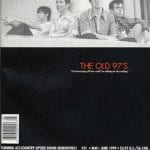