Idle since 2007’s What Is?!, King Khan’s garage-soul band is back with an album that adds a bit of genre-blending finesse to their early raw power. The title doesn’t actually refer to the band’s hiatus, but instead to an indigenous sovereignty movement that struck a resonant chord with Khan. More largely, the reference signals the latent social criticism embedded beneath the album’s rock ‘n’ soul surface. The commentary is in the lyrics, but you’ll have to hear it through a tasty mix of Love-inspired psych, Flamin’ Groovies-styled rock, Memphis-flavored horns and West Coast sunshine-pop. Khan fits these together with a naturalness that belies their disparate origins, and his vocals are equally at home on soul ballads as they are on psych-tinged garage stompers. This isn’t as raw as the band’s earlier releases, nor is it as heavy on the funk or punk, but the seamless mix of psych, pop and garage is a fair trade for those willing to hear the band do something new. 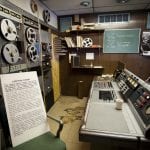