Catching Up With: Portland, Maine’s Songwriting Duo “The Coloradas”

I referred to The Coloradas recent release as “an Americana genre masterpiece” and I still stand by that statement to this day. There is something about the simplicity of these recordings that really strikes a chord with me. The songwriting is the most important part of these songs. They stand on their own without fancy frills or editing, yet the playing and arrangements are still impeccable. I caught up with Roy Davis of the band to answer a few questions…check them out below:

1. So, who are you, what do you do, why are you here? Give the fine readers the low down on The Coloradas…
RD: The Coloradas are Bernie Nye and myself. We have been playing music together in various forms since high school, but the last two records have been a collaboration of his and my songwriting, with string band arrangements. The result usually lands somewhere between bluegrass, old-time, and blues music. These records are The Coloradas (self-titled), released in 2012, and Big Empty, released in October of this year.
2. There is a real nice juxtaposition between both of you in the group (and of course adding a plethora of talented friends helps), your writing styles, and how you sonically mix to create the sound that is the band. How do you guys really foster that successfully? Do you ever find it difficult to find the sweet spot when arranging songs?
RD: Arranging songs is tricky, and something I think we get better at every time we make a new recording. Bernie and I write songs separately, never together. So when one of us brings their song to the other, we usually have very strong opinions of how we want it to sound. But to get it from that point to a collaboration (which is the spirit of our group), it takes a certain amount of compromise and an open mind to new ideas. The new album, Big Empty, is mostly sparse duo arrangements, with a little help from Joe Walsh, the best mandolinist in the universe. We tried to make the focus on the songs themselves as much as we could.
3. Your most recent release, Big Empty, has seen some good press (including here on RLR). How did the recording of this come about? There is a real “the listener is right there in the room” kind of production to the entire record that is all too often unseen in the music industry. I felt it to be extremely endearing, raw, and emotion driven. What made you guys take that approach?
RD: When we decided to make a new record, there was some debate about whether to go into a studio (such as I have in the past with my solo records), or to record it ourselves at our home studio, like we did with our self-titled album last year. We decided to do it ourselves. There’s pros and cons to that kind of recording: you have lots of time to work on arrangements, practice the tunes, scrap tunes and start over, and make everything sound the way you want it. You also have a lot of time to nitpick, have disagreements, and over think things, which if you’re not careful can result in a lifeless album. We ended up recording the album down in Philadelphia, where Bernie was living for a few months. We were working in his apartment, which had tall ceilings, very little furniture, and wood floors. So they were very “live” sounding rooms. Lots of natural reverb, which we loved.  We really focused on making the album sound like the listener is at an unamplified acoustic performance, because that’s our favorite way to experience music. 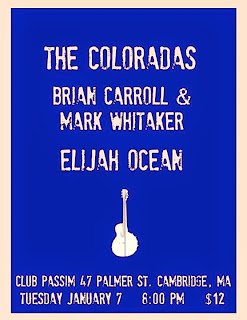 4. You boys have a big show coming up in Boston at one of the most noted listening rooms in the country, Club Passim. Sell us on why they should be at that show!
RD: January 7th will be our second time performing at Club Passim. It’s a beautiful little listening room in Cambridge, exactly the kind of place we love to play. The sound is great, it’s cozy, and the people that come out are passionate about hearing original folk and roots music. Passim has been hosting these types of concerts for 50 years, so they know how to put on a show. The bill in January is going to be great, we’re joined by our good pal and excellent songwriter Brian Carroll, who will playing in a duo with banjoist Mark Whitaker. Also, our friend from New York, Elijah Ocean, will be performing. His group just got back from a 3 month full US tour, and Elijah’s songs are the best thing coming out of NYC. He just recorded his second Daytrotter Session, which is a way cool live recording blog out of Illinois. So folks can head over to Daytrotter or Elijah’s website to check him out. Portland, Boston, and NYC will all be represented. Should be a fun night.
5. Ok, so plug anything else you have coming up in the next few months/ what else.
RD: We have a full list of shows over at www.thecoloradas.com!  We’ll be playing regionally this winter and in Germany and Austria in April. This will be our third trip to Europe, both of our albums have been released on vinyl on german label Hometown Caravan. We’ll have copies of the album LP’s and CD’s at the Passim show, and they can be ordered through our website, itunes, or a zillion other stupid websites that sell music.
Check out The Coloradas all over the internets at any one of the links below and be sure to be out at Club Passim on January 7th. Tickets for that show are now on sale at: http://passim.org/club/brian-carrollmark-whitaker-bluegrass-duo-coloradas-and-elijah-ocean 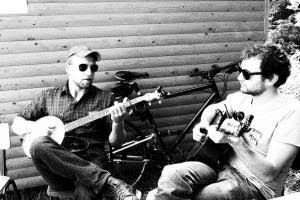