Caroline Herring has made a name for herself over the past decade as one of modern folk’s greatest songwriters. Her evocative and razor-sharp tunes, combined with her vivid alto and its intoxicating, lingering vibrato, have garnered critical acclaim on Southern Gothic-themed albums including Lantana (2008) and Golden Apples of the Sun (2009).

A listen to those records makes it clear that Herring, capable of penning gritty odes like “Song For Fay” and wistful numbers such as “Abuelita,” also refuses to shy away from provocative subjects. On Lantana, she stunned critics and fans alike with the epic “Paper Gown,” which offered a humane, multi-layered portrayal of Susan Smith, who was convicted of murdering her two young sons in the mid-1990s. Likewise on Golden Apples of the Sun, Herring tackled race in the South on “The Dozens,” a haunting tune that ranks among the best pieces of Southern literature produced in the past decade. Period.

Her latest track, “Black Mountain Lullaby,” continues this trend by telling the story of Jeremy Davidson, a three-year-old from Inman, Virginia, who was crushed by a half-ton boulder dislodged from a mountaintop removal mine site above his family’s trailer in the early morning hours of 20 August 2004. Sung in the voice of the toddler’s mother, “Black Mountain Lullaby” is a lament for a culture that has seemingly placed fast profits above the lives of its people.

Jason Howard: What inspired this song?

Caroline Herring: I was in England with a group called the Cecil Sharp Project, and we spent six days writing songs about Sharp and his ballad collecting in Appalachia, as well as his life there. We needed songs, and soon after my arrival I began thinking about this op-ed I’d read in the New York Times recently—Silas House‘s op-ed about the plight of Appalachia and how most in the U.S. have forgotten about the plight of so many people there. I was really moved by his piece. And in it House wrote about mountaintop removal, and how coal companies brazenly move in to do their work.

What really stirred me was the mention of a three-year-old who was crushed to death in his bed by a 1,000-pound boulder dislodged by trucks illegally working at night under poor lighting conditions. I started researching that incident, and I couldn’t shake my passion to write about it. I found out that the boy’s name was Jeremy Davidson, and also found out that the in their settlement with the Davidson family the coal company made them promise they wouldn’t speak publicly of their son’s death ever again.

JH: Why did you choose to structure—and title—the song as a lullaby?

CH: We were researching Sharp’s work as a ballad collector, and the songs we made focused on Sharp’s life and collections. When I was working on the lyrics for the songs, my friend and colleague Kathryn Roberts pointed out that Sharp did collect a few lullabies, though they were not of much interest to him. In fact the only one we found said: “Bye, baby, baby bye.” Well that line made the song. I had already been moving towards writing the song through the mouth of the mother, because I had read in an article her recounting the evening before her son’s death, how they ate supper together, how she read to Jeremy and rocked him to sleep and then put him in his little bed. So I decided to make the song a lullaby from mother to son. Sadly, the song is also a lullaby to the mountains.

JH: You’re obviously well versed in the history of roots music. Would you call “Black Mountain Lullaby” a murder ballad?

CH: I know that many traditional murder ballads focus on the killings themselves, more it seems of a man killing his wife or wife-to-be because of her ‘roving eye’ than anything else. But yes, I do consider this song a murder ballad, a grotesque one, with the universal theme of greed killing everything in its path, even and especially those most vulnerable. A thousand-pound boulder crushes a boy to death in his bed? By coal company trucks clearing mountaintops in the middle of the night, with poor lighting, and in illegal conditions? That’s premeditated murder in my opinion. Passionless, deliberate, cold and hard-as-a-stone murder.

JH: You’ve never been afraid to take on hot-button issues in your music, but you write about them in a complex way. You make everything three-dimensional. What attracts you to these subjects?

CH: I don’t know why I’m drawn to the disturbing subjects, but I am, and always have been. Growing up in Mississippi probably had something to do with it. My society was completely segregated, with a real and threatening feel of violence, and no one wanted to explain that or talk about it. So as a child I always felt something was very wrong. And of course something was very wrong. As I grew older I found out why no one wanted to talk about it—because he or she would be ostracized, whatever color they be.

Then I went to Ole Miss, and I was in the honors program. They put honors students on the top floor of the freshman dorm, and, well, that’s also where they put the African-Americans and some of the international students. So I gained my best education on the top floor of that dorm. Then I took a freshman American History class, and for my class project I compared the New York Times headlines and Jackson, Mississippi Clarion-Ledger headlines of the 1962 integration at Ole Miss. The discrepancies blew my mind. And then, finally, at a Civil Rights and Journalism conference at Ole Miss later that year, I went to see viewings of the epic documentary Eyes on the Prize.

That was it. By the end of my freshman year I began to understand that tragedy was everywhere around, but heroes were, too. I’m always going somewhere, feeling the ghosts under my feet.

JH: How did your colleagues at the Sharp Project respond to the song when they first heard it?

CH: They loved it! Several of the musicians said it was by far the most important thing we accomplished that week. Another songwriter flattered me another way; he tried to steal the idea! And so I had to work hard and fast to get it to completion before he did. But when you have to write 18 songs in five days, anything is fair game.

JH: We’ve heard that you’ll have a new album out next year.

CH: I do have a new album coming! Be looking for it by fall of 2012, on the Signature Sounds label. 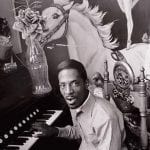 Freedom Now!: A Field Notes playlist for the civil rights movement. And a question.