Spring has sprung, but Winter is still coming…The Manimals make sure the keep us aligned with their new record, SEVEN, a collection of songs that pay tribute to the infamous Game of Thrones. Highlighting characters throughot the record, we see the band diving in deep behind storylines, and really getting inside the head’s of those who make Game of Thrones the stunning piece of art it is today.

SEVEN can also be viewed the same way. We see the band paying homage to the show, without making it cheesey; the record is not only a thoughtful glimpse into the show, but also an extremely insightful look into The Manimals themselves.

Countless hours were spent crafting each song, and singer Haley Bowery even went as far to create maps of Westeros for the release. I feel like SEVEN is much more than a concept album, it is a true labor of love; not only in regards to the show, but the artistry of the band themselves. The first single that has been released from the record is “Talk,” which is written from the point of Tirone.

What makes the album and band go seemingly the extra mile, is that the songs are not only stories about the show, or the characters, but they bring to life events through the eyes of the beholder. Each character showcased on the record tells a story from their point of view, which creates points of interest all on its own. One does not have to be a fan of Game of Thrones to enjoy SEVEN, as the musicianship and instrumentation of The Manimals speak for themselves.

The Manimals “Talk” Video can be watched via Youtube. 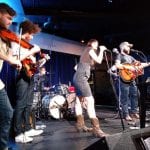