Brian Wilson and The Lost Boys of the South Bay

I was born in West Texas in 1955. I still identify myself as a Texan because those roots really run deep. I’ve grown up with a strong love for real Country Music. But, in 1956 my father was killed in a tragic plane crash that left me (the youngest in a family of five) stranded in a small town with little opportunity.  After being courted by a carpenter and country musician who had moved from the Panhandle to the South Bay of Southern California, my mother re-married and moved us to Manhattan Beach.

As the years moved along, my brother Ken (who was five years older), grew up hearing that The Beach Boys lived near us. We even heard their drummer, Dennis, surfed around Manhattan Beach Pier.

In the mid-60′s, Ken made friends with a guy named Bill Tucker. Tuck, as he came to be known, was a wild one. He was a charmer and mostly a really good bullshitter who could talk his way into and out of trouble with the blink of an eye. Ken and Tuck became close friends. One of Tuck’s constant stories was how he grew up as a neighbor of the Wilson brothers and knew all three of them very well.

For years, Ken would just smile and nod his head and let Bill tell his stories.  The only thing is, this one was true. Ken found this out abruptly in 1974, when Bill told him, “Come on, Ken. Let’s go to Brian’s house.”  Ken went along, thinking it was another line of charming bullshit from his crazy friend, Tuck. To his surprise, Bill drove them to a huge Bel Air estate, parked his car and went to the door and knocked. Carl Wilson answered, looked at Tuck and Ken and said casually, “Oh Hi Bill. Come on in.” 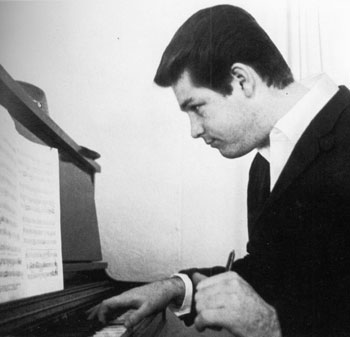 That began a series of visits to Brian’s house that lasted about a year. During that time, the band was experiencing a come-back with the release of a double greatest hits package and a live album.  My friends and I, during our senior year in high school, had plugged into the acid and weed friendly musings of Holland, which had left us primed for more from “America’s Band.”

Ken told me several stories. My brother was a lot like Tuck and could B.S. with the best of them (like the fake autographs on an early Beatles album he had shown me years before). Or, there was also the time he brought home Jimi Hendrix’s guitar in ’68.  But, his Brian Wilson stories were verified later by biographies and feature stories that came out. This was during Brian’s sandbox days. He really had a sandbox in his bedroom. He was terribly overweight and suffered from chronic depression.  As has been noted, he loved the company of friends. He loved to collaborate with others.

When Ken first met Brian, he was sitting in front of a new refrigerator. According to Ken, it was huge. Brian was sitting in front of it, staring at it. He looked up at Ken and Tuck and said, “I’d really like to talk with you guys, but right now..I just gotta look at this thing!”   Eventually, he did get to know Ken. He brought the two of them to the piano where they’d work out segments of songs. One such segment ended up on Brian’s first solo album, Brian Wilson. When Brian would get excited about one of the songs they’d create, he’d jump up and say…”It’s a hit! Let’s call Danny Hutton!!”   From what Ken told me, Danny would mostly blow off Brian’s excitement. 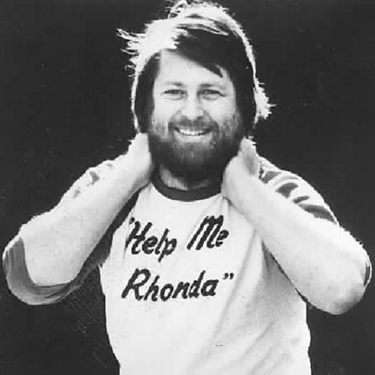 There was a time when Johnny Rivers came came to Brian’s house. He was interested in recording “Help Me, Rhonda.”  All Brian did was laugh. He showed him the chords and kept calling an irritated Rivers, “the seventh son.”   “Are you the seventh son, man?” He’d laugh.  Then, he joked with Rivers about recording “Help Me, Rhonda.”  “Why do you want to record THAT?” He’d laugh!   Eventually Rivers did record the song and it charted well for him in the early 70′s.

Then, there was the John Lennon Rock & Rollsessions at A&M studios. This is where Tucker’s skill came in. Tuck was great at impersonations. I once heard a recording of him talking with a somewhat suspicious George Harrison on the phone. George thought he was talking with Neil Young.

Bill had Brian down cold. Ken told me that Tuck was able to call A&M studios and get through to John Lennon with his Brian Wilson impersonation. He said that there was a recording of the conversation, but I never heard it.

But, here’s why I believe this is true. During the 15 minute conversation–apparently Lennon was far more gullible than Harrison–The Beatle invited Brian to come to A&M studios to appear on his record of his favorite songs from the 50′s rock and roll era. The album was produced by Phil Spector, who wasn’t crazy about having Brian around, but still wanted to please John Lennon. Tucker ( as Brian), accepted the invitation to record with John. Before they hung up, Lennon said to Brian with his best  British droll, “Don’t forget to bring the suede!”   Ken and Tuck thought he was talking about some new drug.

When Ken told me about it, we laughed and really wondered why John Lennon asked Brian Wilson to bring suede to the Rock and Roll sessions.  Years later, in the 80′s, when Albert Goldman’s controversial biography on John Lennon came out, we found our answer. Lennon loved to tease people. His favorite way to joke with Brian was to ask him if he owned the Wilson Brothers House of Suede in Beverly Hills. The brothers used to appear in lame, amateurish local commercials which invited satire. So, this was Lennon’s way of ribbing Brian Wilson in 1974.  The story helped me later to authenticate my brother’s story of the phone call Tuck made to Lennon and what happened after. When Tuck and Ken told Brian about Lennon’s invitation, Brian refused. His paranoia was high during these days and he found it hard to leave his house.  Sometimes he couldn’t get out of bed. So, Tuck asked Brian to call the studios and let them know he would be sending two friends to come before he did, to be sure everything was okay at the sessions.

It worked. Ken and Tucker showed up at A&M and when questions were asked, Ken said that Spector strolled by and shouted, “Let Wilson’s people in!” Ken recalled seeing Garth Hudson of The Band there that night. He said they were in the midst of recording “Stand By Me.”   He also said that Lennon acted exactly the way he appeared in Hard Days Night – funny, weird, whimsical. When he saw my brother, he went over to him smiling. Ken was holding a bottle of Tequila in one hand. Lennon looked at him and said, “Thank you very much!’ and walked away with the bottle. Ken said before Lennon would do the count for “Stand By Me,” he’d say, “This one’s for, Herbie!”  Referring to Herb Albert, one of the owners of A&M.

Later, as Ken and Tuck continued to visit Brian, things got tense. Whenever his wife Marilyn or Mike Love and Bruce Johnston would be there or there were ‘Beach Boy’ meetings involving Brian, he’d turn into a depressed shell. But, before things folded altogether, Brian gave Ken and Tuck a little momento. Again, this was important for me to be able to verify truth from fantasy.  Brian, along with the other Beach Boys, received framed gold albums for sales from the album The Beach Boys In Concert, which had come out in 1974. On one visit to Brian he was standing with the gold album in his hand. He had tried to play it. It didn’t play and Brian was disappointed. He gave it to Ken and Bill for all the ‘work they did for The Beach Boys.’   Ken took it to the picture framing company he had been working for and had it re-framed. Then, he showed it to me. He and Bill also took a photo of them with the album.

Not long after that, the pressure grew too much for Brian. His wife and family began to chase away all of Brian’s friends including Tuck and Ken. During this time, from what has already been reported, there were plenty of crowds hanging on to Brian and trying to use him. It was somewhere during this era that he met the self-serving psychologist Eugene Landy. But, Ken and Tucker were different. They were like childhood friends hanging out with an older hero. But, when Ken last saw him, Brian was openly crying as he told him that they shouldn’t come around anymore.

Still, it was always with a bit of delight and a mischievous grin, that Ken told me about that year with Brian. He saw the musical genius in action, who could hear every part of any song he went to arrange and produce. He also saw his childlike enthusiasm about the music he produced. But, mostly, what came across to me when Ken talked about Brian was a sense of kinship, respect, loyally and the real honor he felt at even having a fringe association with such a musical legend.

I think it’s safe to say my brother Ken, Bill Tucker and Brian Wilson also found a connection in simply being misfits together. They created their own world of play. All three of them were plagued by substance abuse and mental illness. Later, Bill would take his own life after years of struggle with his own bi-polar illness (an illness which Brian Wilson also famously struggles).

My brother Ken, passed away in 1996, after building a home recording studio and using many of the recording techniques he learned from Brian. He also worked for number of years at Sound City Studios in Van Nuys working with artists as diverse as Fleetwood Mac, Jimmy Carl Black and Burl Ives. In his final years he promoted surf music and long board surfing in the Southern California and envrironmental awareness through the Surfrider Foundation.  Ken’s fate was due to an accidental overdose of prescriptive medicine. He was also diagnosed bipolar.

Brian, of course, just turned 70 and has been more than a survivor. Since 1975, he made what could be described as one of the greatest comebacks in music history, both in the studio and on the concert stage. I’ve been privileged to have seen him on his solo tours. I can’t help but wonder if I showed him a picture of Ken and Bill – would he remember? After so many years and so much struggle, it’s hard to say.  But, I still have the picture of Ken and Bill Tucker taking a bite out of the re-framed Beach Boys Live Gold album. On the back of the aging photo it reads in Tucker’s hand,