Brian Ritchey – No One Knows Lonely

Recommended by Matthew Ryan (who shares with him a certain taste for rainy days), Brian Ritchey is a big Indiana-born guy living in Nashville who could easily pass himself off as a secret member of The Jayhawks or as Ryan Adams’s brother, if we just had the occasion to listen to his debut (entitled E.P.) when it first came out in 2005.
These are the names that come to mind listening to the clanging It Feels Like Rock-n-Roll? (with some echoes of Tom Petty), to the semi acoustic warmth of a Coal Black Moon (reminiscent of Nick Drake), to the harrowing rock ballad Apology (five minutes of sentimental catharsis with the ghosts of Gram Parsons and The Band), or the heart-rending feedback of Joke.

The extended use of distortion is another element that Ritchey and Ryan have in common, but if in Ryan’s music it’s the most original vehicle possible for his melodies, in Ritchey’s songs it seems more like an open wound, like a sudden tear provoked by an unexpected disappointment, or by a defeat too crushing to deal with. 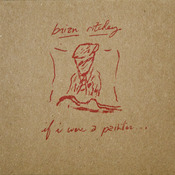 The best song from If I Were A Painter… sounds like a perfect example: No One Knows Lonely is pop candy shattered by a minute and a half (out of five) of distorted feedback solo capable of creating a savage and hallucinatory climax.
On the same level, Which Way Is Hell? (the opening track) is a loud and noisy homage to The Who in the form of a bar band dealing with punk rock (and if you know the great Titus Andronicus, you’ll know what I’m talking about), and the title track is a rockabilly whip. On the other hand, the rest curls up in a series of lazy and pensive ballads–Gray Skies, Sleeping On Gold, Oh, Broken Girl, Hope Rains–where the sob of the sorrowful heart of Brian Ritchey cannot but call to mind Ryan Adams’s Heartbreaker (‘00).
Be Happy is a beautiful seven-minute-long folk-rock ride between New York fog and California skies, culminating in an overwhelming wave of guitars, harps and percussion and as far as fascination and magnetism go, the piano closure of A Lonely Man Was Born (…related to Randy Newman) stands out.

I hope I have done a good job of drawing your attention to Brian Ritchey. If not, it’s a shame because, even if we’re not talking about the future of rock and roll (and who is still looking for it nowadays anyway?), we should never give up looking for great songs. 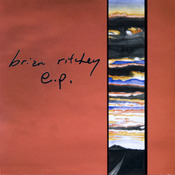 The Many Voices of Ryan Balthrop