Box Full of Letters from Issue #47

I have been a fan, and subscriber, of No Depression for many years now. I typically read each issue cover-to-cover and often dig back into my archives to find a half-remembered review or feature. Since my job involves a great deal of travel, I frequently do my reading on airplanes, or in airports, or in taxis along the way. And so it was that I opened issue #46 [July-August 2003] onboard a US Airways flight waiting to depart from Philadelphia on a hot summer afternoon. And while the plane crept slowly forward in line for takeoff, I read Rodney Crowell’s remembrance of June Carter Cash. I finished the piece just as the plane’s wheels left the ground. And I closed my eyes, put my head back, and let the tears roll freely down my face. Thank you Rodney Crowell, for allowing me to meet, for just one moment and from a distance of space and time, June and Mother Maybelle. What towering spirits. What a stunning remembrance. Please send me information on the 100-year subscription renewal plan!
— Stephen M. Usery
St. Paul, Minnesota

I would like to respond to Peter Blackstock’s review of Gillian Welch’s new record, Soul Journey, published in the July-August edition [ND #46].

I respectfully disagree with the author’s conclusion that Soul Journey is “status quo,” and with his logic that Welch, as an artist, is due a “decisive left turn.”

I would extend to this latest effort Blackstock’s opinion of Welch’s first album, Revival — that it shows talent and vision, that its songs are classic. How could Soul Journey be reviewed without mention of “Wayside/Back In Time” or “Lowlands”?

Backing up a bit, I have to disagree more. Hell Among The Yearlings is one heck of an album, surpassing in many ways the more polished Revival. “The Devil Had A Hold Of Me”, “One Morning” and “I’m Not Afraid To Die” put the guts out for everyone. That album took a turn, and so did Soul Journey.

I don’t think anyone will argue that Time (The Revelator) isn’t Gillian’s best. I agree with the author, it is the greatest album of the decade (and century and millennium). I would add that it’s also the best folk album since The Freewheelin’ Bob Dylan. (Folk, whatever that is.)

Soul does for Time what Hell does for Revival: Their differences complement the other, while each stands alone. Sure, Dylan made Highway 61 Revisited and Bringing It All Back Home, but he first made The Times They Are A Changin’ which followed Freewheelin’. Should he, then, be criticized for not breaking away from folk soon enough? The gun, I’m afraid, is being jumped.

For me, Soul Journey was the album of the summer. It speaks to me in a very real way. Yes, I too was “just a little Dead Head” and think perhaps we all should “drink a toast to Nashville…before they tear it down.” I love the allusions to “Midnight Moonlight” and “Shady Grove”. I love the simple, Young-esque bass and drums, the thought of driving ragtop down to Atlanta, to live out a fantasy, maybe just to get out of the lowlands. I know what it’s like to make a lover’s prayer and I had a real good mother and father. Maybe no one knows my name, but one monkey don’t stop the train.
— Sam Clanton
Reeds Spring, Missouri

I read with interest, self interest of course, your review of Allison Moorer’s live CD and DVD [ND #46], which I worked on. I want to thank you for taking the time to write it and for your comments, both positive and critical. Speaking only for myself, the thrust of your article, as I understand it, is that Allison is somewhere in between…not commercially successful enough to sit at the table with the grandees of contemporary country and not quite enough of a rebel to be part of the gene-splice of hybrids that grow on the left bank of the creek.

I think you make some valid and interesting observations. However, I also think that since you chose to use the review as an opportunity to editorialize about her entire career, that your piece is at fault for the same thing that you think she is guilty of, or at best a victim of: vagueness. Should she have tried harder to have made hit country records? Since no one at MCA (with the exception of Tony Brown) seemed to believe in her and husband/collaborator Butch Primm’s songs, and with the gatekeepers at radio cool to her music, was she supposed to kowtow to the Row totem pole and try the creativity-by-committee model? As for crossin’ the creek, when she got her first record deal, should she have just rushed to the Gram Parsons shrine like so many others while ignoring her own equally valid sources of inspiration (Elvis, Otis, Tammy, Elton, Waylon, Dusty, Willie, Beatles, Stones, Neil, Kris, the Band etc.)?

Allison is a country singer who wants to sing her own music. Those were the terms she demanded when she signed with MCA and against all odds and opinions, that’s what she did, with the lone wolf support of Brown. If her music has gotten less straight up-country, well her voice hasn’t. She sings like she talks. It’s not an act.

When you question her aesthetics (which to me means her artistic motivation), I have to take issue with your perception of Allison Moorer. Everything she has done musically to date she has done while signed to a Nashville major label. The person that “agreed” to do a vocal duet with Kid Rock is the same person that turned down a Diane Warren-written, MCA orchestrated, “sure shot” Hollywood soundtrack vocal event; not just because she thought it was uncool, but because she didn’t think the song was very good. If it doesn’t take guts to try and alter modern country music from within the beast, when you actually stand to lose financially by not playing along, it does at least take conviction. And if in your opinion nothing in her entire performance is as “soulful” as Lonesome Bob’s few lines in “No Next Time”, well it wasn’t for lack of feeling. I’ll have to go on record as disagreeing with you on that one. As for Kid Rock’s “caterwauling,” I kept hoping Hank Jr. would emerge from the wings and just distract everybody.

I sincerely appreciate your magazine. Thank you for the opportunity to talk back.
— R.S. “Bobby” Field
Nashville, Tennessee

[Ed. note: This letter was edited to fit available space.]

Great magazine! However, I wanted to clear one poor misconception regarding Roy Kasten’s critique of A Bocephus Celebration [ND #46]. He stated that he disliked Lynyrd Skynyrd and Marshall Tucker Band’s “watered-down redneck metal” rendition of some of Hank Williams Jr.’s songs. However, he must remember that it is actually the Lynyrd Skynyrd cover band and the Marshall Tucker cover band that performed these songs. When the lead singer, lead guitarist, drummer, and all of the songwriters are no longer with the band, then it really isn’t Lynyrd Skynyrd or Marshall Tucker Band. Once you get over the southern rock stigma and the confederate flag-waving idiots, then most people realize that they were musically and lyrically great bands. As for the cover bands sucking and ingurgitating, that doesn’t surprise me. Just a little clarification.
— Matt Preusser
Richmond, Virginia 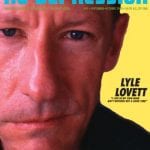