Bonnie and Dawn commit murder on the stage at Town Hall

On the night after the day that they played at the Newport Folk Festival, Bonnie ‘Prince’ Billy and Dawn McCarthy walked onto the stage of New York’s Town Hall with Van Campbell, Emmett Kelly and Cheyenne Mize. Sitting on chairs that looked as if they were bought at a store specializing in selling used office equipment, and while holding blunt instruments in their hands…I witnessed a murder. Note by note, song by song. They killed it.

They killed it…meaning it was one of the most memorable, loving, kind, considerate, joyful, musical, harmonious, respectful, caring and beautiful hundred minutes of concert give and take one could hope for. And do you know what? You’ve missed it. This tour of collaboration to support one of the most wonderful albums I’ve ever heard is finis. They played their last song a week ago in Louisville. Will Oldham goes off and does whatever it is he does, and Dawn shall most likely make her way home to have the baby she’s carrying.

Town Hall is within walking distance of Grand Central, Bryant Park, Times Square. Midtown. Since being built in the twenties as a place where protesters and educators could speak out in public, it’s also been heralded as an excellent concert venue. It has hosted the famous jazz series in the fifties, Dylan, Ginsburg and the Fugs a decade later, classical and modern composers, films, dance, theater, rallies and despite the Diet Coke and Peanut M&M’s costing me a ten spot plus two, it’s as fine a place to see an event that you’d possibly want or need. You walk through the doors into history, not just a building.

Not every seat in the house was filled on this particular night. A missed opportunity to be sure. Patches of red among the sea of denim.

This is what I’m trying to tell you, and why my words are sometimes useless:

You might say that this album is a tribute. To whom? The songwriters or the performers? Either and both. It’s meant to be heard. It’s destined to be lost. 120,000 albums released per year. 2,000 sell just 500 or more. Are you a treasure seeker? I’ve just given you the map.

Sean Moeller, co-founder of the wonderful Daytrotter series of web-based music video performances, has this to share: “A month and a half ago, I saw Will Oldham standing with his black fingernails over by the bar at the end of the Cowboy Jack Clement tribute show in Nashville. The man, most famously known musically as Bonnie ‘Prince’ Billy, is not a man that you feel comfortable approaching. You leave him alone. The thought of approaching him, to pay a compliment, to just say thank you for the songs, is terrifying. He has made himself into the kind of modern legend that is rare these days. He is prolific and still we are only given so much, never more. He pours it all into his own country folk songs and the reinventions to those that others have written. The record he has made with Dawn McCarthy (a collection of songs performed by the Everly Brothers, at one time or another) is another sweet and enchanted chapter to the bushy poet’s tattered book and it’s about time he appeared here, at the most legendary of American music festivals, to take his rightful place, on a stage that Phil and Don took in 1969.”(From the Newport Folk Festival website, 2013) 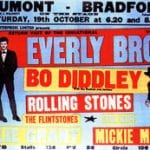 Video: The Life and Times of The Everly Brothers The Ridges on Daytrotter