I blogged about Mike Bloomfield and Bob Dylan in December, writing here about their first encounter in Chicago in 1963, the crucial role that Bloomfield played backing Dylan at the Newport Folk Festival, the beautiful licks he laid down on Highway 61 Revisited, and his decision to stick with Paul Butterfield rather than Dylan when he came to that crossroad in August 1965. But I didn’t elaborate on the connection they shared with Big Joe Williams, who was a formative influence on both, and may have been the only major bluesman whom Dylan played with in his early years.

In the case of Dylan and Williams, what “early” connotes is pretty unclear. If what Big Joe said was true, he’d have you believe he’d met Bobby Zimmerman in 1947 when the cherubic Minnesotan was a six-year-old. That’s unlikely, but Nat Hentoff’s New Yorker article on Dylan–“The Crackin’, Shakin’, Breakin’ Sounds,” published in 1964 when the magazine was renowned for its fact-checking–says, “He had met Williams in Evanston, Illinois, during his break from home at age 12.”  Or maybe it happened on one of Bob’s other flights from Hibbing, from which he claims to have run away at ages 10, 12, 13, 15, 15 ½, 17, and 18.

What is certain is that they were together in Greenwich Village in October 1961, when Big Joe played a two-week engagement at Gerde’s Folk City. Dylan sat in most nights and by week two they were being billed as Big Joe and Little Joe. Five months later, in March 1962, when Big Joe recorded for Victoria Spivey, the classic blues singer who operated Spivey Records in Brooklyn, Dylan played harmonica and sang harmony, and a little lead, on “Sittin’ on Top of the World.”

A year later, Dylan named Big Joe in a prose-poem that was included in the program for a Town Hall concert on April 12, 1963.  “My Life in a Stolen Moment” is a lengthy, tongue-in-cheek catalog of young Bob’s life, and after cautioning that “I can’t tell you the influences ‘cause there’s too many to mention an’ I might leave one out,” he names two, “Woody Guthrie, sure, Big Joe Williams, yeah.”

I don’t recall Dylan mentioning Big Joe in his unindexed memoir, Chronicles, Volume One. But in 2001, he told Rolling Stone, “I think one of the best records that I’ve ever been a part of was the record made with Big Joe Williams and Victoria Spivey. Now that’s a record that I hear from time to time and I don’t mind listening to it. It amazes me that I was there and had done that.”

Big Joe talks about Dylan in the final interview element of this performance filmed at Bagneux, outside Paris, in 1971.  The voice-over by a translator obscures most of what Joe says, but “Dylan,” “Gerdes,” and a few other tidbits are audible, and in an earlier segment it sounds like he’s naming Mississippi John Hurt as an early influence.  What is perfectly clear, at least, is the performance, and this one finds Big Joe in excellent form on 9-string guitar with the Chicagoan Mac Thompson on bass. The clip opens on Joe’s great original, “Baby Please Don’t Go,” then proceeds with “My Little Machine,” “44 Blues,” and “Blues Jumped a Rabbit.”

While Big Joe’s name is apparently missing from Chronicles, Dylan nonetheless writes movingly of the spiritual connection he felt with figures like the Crawford, Miss., native and the blues tradition Williams embodied. ”Beneath [popular song,] I was into the rural blues as well; it was a counterpart of myself. It was connected to early rock’n’roll and I liked it because it was older than Muddy and Wolf. Highway 61, the main thoroughfare of the country blues, begins about where I came from…Duluth to be exact. I always felt like I’d started on it, always had been in it and could go anywhere from it, even down into the deep Delta country. It was the same road, full of the same contradictions, the same one horse towns, the same spiritual ancestors. The Mississippi River, the bloodstream of the blues, also starts up from my neck of the woods. I was never too far away from it. It was my place in the universe, always felt like it was in my blood.” 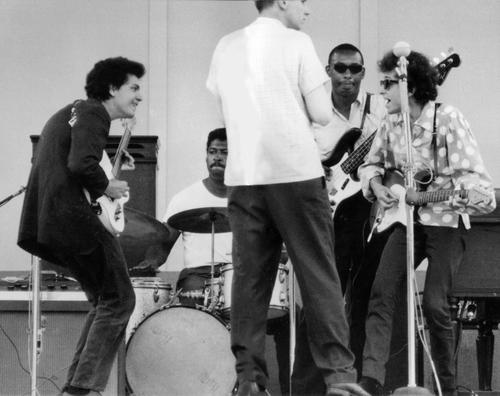 Where Dylan’s direct contacts with bluesmen were relatively few, Mike Bloomfield knew many, including Muddy Waters, Howlin’ Wolf, B.B. King, and many others, both contemporaries and elders, during his youthful days prowling Chicago’s South Side. He met Big Joe at the Jazz Record Mart, which then, as now, was operated by Bob Koester and functioned as a drop-in center, crash pad, and networking site among musicians in the Windy City. Big Joe stayed there when he was in town; Charlie Musselwhite called its basement home when he arrived from Memphis and clerked behind the sales counter; numerous other musicians have testified to getting their Chi-Town bearings at Koester’s landmark, then on West Grand Street, now on East Illinois.  (Koester also operates Delmark Records.)

When he wasn’t honing his chops or going head-to-head with other guitar-playing firebrands around town, Bloomfield booked the music at the Fickle Pickle, a North Side coffeehouse that presented blues and folk music in the early ‘60’s. Big Joe secured a regular Tuesday night booking at what he called the Pick a Pickle, and he announced it in a song in which he called his young protégé by name.  “Mike Bloomfield and Larry treat you right/Don’t allow you to drink no whiskey/But you can get a glass o’ apple cider.”

In 1980, Bloomfield published Me and Big Joe, a picaresque account of his travels with Williams, and in particular the trips he (and Musselwhite and Roy Ruby) took with Joe to the countryside outside Gary, Ind., and a later excursion to visit Joe’s relatives in St. Louis. The trip to Indiana was in search of a roadhouse where J.B. Lenoir and Lightnin’ Hopkins were playing. “Eventually we came to a barbecue pit,” Bloomfield recalled. “The roadhouse…consisted of a pit in front and a large bare room in back…that was heated only by body heat…And that night it was hot.” After noting that Lenoir’s trio of sax players were in “such advanced stages of age and inebriation that they had to lean against one another to avoid collapse,” he says, “J.B. had a high, almost feminine voice, and was a fine singer. He danced through the crowd as he played and sang, and Joe sat nodding approval.”

“Then old Lightnin’ came on, and he was as sly and slick and devilish as a man could be.  He had a real high conk and wore black, wraparound shades. He had only a drummer behind him, and when the blue lights hit that conk—man, that was all she wrote.” Bloomfield would later introduce Hopkins as his idea of the ultimate bluesman at a blues workshop he hosted at Newport in 1965.  But that night near Gary, things went awry when Lightnin’ and Big Joe patched up a disagreement with “a drink, [and] that was a mistake, because Joe didn’t need it.” What ensued was an all-night ride into the ghettos of Hammond and East Chicago as Joe searched out old acquaintances and good times. “If Joe wasn’t ready to return to Chicago, that was it—we weren’t going.  Not that night, anyway. Finally, as dawn broke over the smokestacks and rail-yards and cracking-towers of northern Indiana, Joe grumblingly directed us home.” 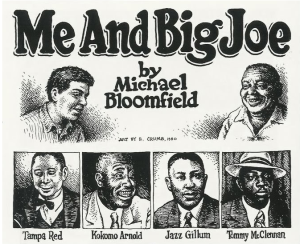 The subsequent trip to St. Louis made the Indiana excursion seem like a pleasant evening out. Bloomfield notes that Big Joe would turn cantankerous and physically violent “behind larger amounts of alcohol…but as nasty as he could get when drunk, that’s how compassionate and big-hearted he could be when he was sober … His manner could be touching– very sweet, gallant, courtly.”  Suffice to say, it was the sodden Big Joe who showed up for what proved to be a menacing trip to St. Louis, during which he stabbed his young companion through the hand with a penknife. By journey’s end, Bloomfield, who made no secret of the well-to-do upbringing he’d enjoyed, concluded, “Joe’s world wasn’t my world, but his music was. It was my life; it would be my life. So playing on was all I could do, and I did it the best I was able. And the music I played, I knew where it came from, and there was not any way I’d forget.”

Me and Big Joe, with illustrations by R. Crumb, was first published in High Times, and a small paperback edition appeared in 1980. Toby Byron, who maintains the Michael Bloomfield Legacy website, published Ed Ward’s biography of Bloomfield, The Rise and Fall of an American Guitar Hero, in 1983. He says that plans are in the works for new, deluxe editions of both volumes.

‘Get On Board’: Taj Mahal and Ry Cooder Together Again for Tribute to Their Blues Heroes